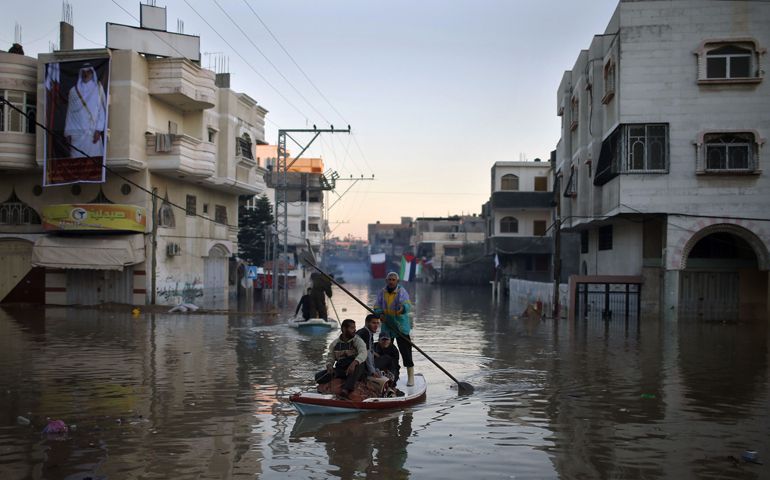 Jerusalem — The snowstorms and torrential rain that battered the Middle East in mid-December threatened to make this Christmas season an especially difficult one for Christians in Gaza.

"There is extensive damage to infrastructure, and we haven't been able to get our staff in until today," McGarry told Catholic News Service on Tuesday. "We are targeting the most vulnerable families."

Many schools remained closed because of structural damage, he added.

The bad weather has made a bad situation worse, he said, noting, "They have not yet been able to resume what passes for normal life in Gaza."

While the northern part of the Gaza Strip saw floods that left thousands of families homeless, 10,000 people evacuated from their homes, and essential hospital personnel traveling to work by boat, most of the Gaza Strip's tiny Christian community and its institutions are located in Gaza City itself and were saved from the worst of the storm, said Sami El-Yousef, regional director for Israel and the Palestinian territories for the Catholic Near East Welfare Association.

He said Latin Patriarch Fouad Twal had to cancel his Dec. 15 visit to celebrate Mass at Holy Family Parish, which traditionally opens the Christmas season in Gaza.

El-Yousef also had to cancel a planned visit to Gaza in which he was to serve as presenter for a three-way Christmas telecast Dec. 14 that included Holy Family Parish, a suburban Washington parish and one in Bethlehem, West Bank.

In addition, Egypt's closure of smuggling tunnels that had served as a lifeline for Gazans increased prices of everyday commodities, and the cash-strapped Holy Family Parish found itself without any immediate funds to organize its annual Christmas party for the children, said El-Yousef. He said his organization was trying to provide funds with a bank transfer, but the money might not arrive in time to arrange for the modest celebration.

"We are still trying to pull off the Christmas party," he said.

Israel has blockaded the Gaza Strip since the Islamist group Hamas took power in 2007.

After the storms, on Dec. 14, Israel allowed shipment of fuel for Gaza's only power plant, which had been without fuel for weeks, complicating rescue operations.

Palestinians charged Israeli water authorities with deliberately opening overflowing dams outside the Gaza Strip to prevent floodwaters from overflowing on the Israeli side. However, an Israeli municipal official responsible for drainage in the area told the daily Israeli newspaper Ha'aretz that there was only one three-foot dam in the area that cannot be opened or closed. He said because of the storm, the water level was so high that the dam could not stop the water from reaching Gaza.

In some places the floodwaters combined with the rain brought water levels to 13 feet.

Ha'aretz also reported that the Israeli water utility company had responded to a request by the Palestinian Authority via the United Nations to send four water pumps to Gaza to aid in controlling the flooding.