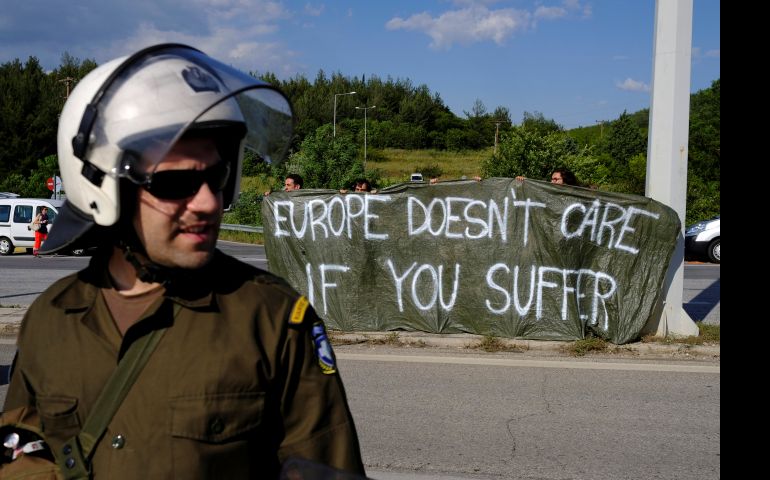 Protestors hold a banner on a highway during a police operation to evacuate a makeshift camp at the Greek-Macedonian border near the village of Idomeni, Greece, May 24. (REUTERS/Marko Djurica)

Idomeni, Greece — Greece sent in police and bulldozers on Tuesday to knock down tents and relocate hundreds of migrants who had been stranded for months in a squalid makeshift camp on the border with Macedonia.

Several busloads of people, most of them families with children, left the sprawling expanse of tents at Idomeni to move to state-run centers further south. Buses were lined up ready to take more, Reuters witnesses said.

By the latest count, at least 8,000 people were camped at Idomeni in difficult, overcrowded conditions with poor sanitation, ignoring previous calls by the government to leave.

As many as 12,000 people, most of them Syrians, Afghans and Iraqis, were stuck there at one point after Balkan countries shut their borders in February, barring them from crossing to central and northern Europe.

Greece was the main entry point for more than a million migrants who made it to Europe last year, most after perilous sea crossings.

New arrivals there have slowed sharply since the European Union struck a deal with Turkey to get it to curb the flow, but the government says there are still more than 54,000 migrants on Greek soil.

It plans to move people gradually to state-supervised facilities which have a capacity of about 5,000. A total of 2,031 people were moved on Tuesday, police said, 1,273 of them Kurds, 662 Syrians and 96 Yazidis.

"The evacuation is progressing without any problem," said Giorgos Kyritsis, a government spokesman on the migration crisis. They would be relocated "ideally by the end of the week", he said. "We haven't put a strict deadline on it."

A Reuters witness on the Macedonian side of the border said there was a heavy police presence in the area, but no problems were reported as people with young children packed up huge bags with their belongings.

Media on the Greek side of the border were kept at a distance. Inside the Idomeni camp, police in riot gear stood guard as people boarded the buses, state TV footage showed.

But at the Oreokastro camp near the city of Thessaloniki, migrants already there shouted at new arrivals not to get off   the buses because of conditions there, a Reuters witness said.

A police official said about 1,000 people continued to block the only railway tracks linking Greece and Macedonia, closed off for weeks by protesters demanding passage to northern Europe.

Trains were forced to divert through Bulgaria to the east, and some goods wagons have been stranded on the tracks for weeks.

"This should have happened a long time ago," said Anastasios Sachpelidis, a local transporters association representative. The closure was "a big loss," he said. "We lost clients, we lost money, time and our credibility."

Human rights groups had raised alarm about the deteriorating conditions at Idomeni, where children slept in the open, scuffles broke out over food, and Macedonian forces who tear-gassed migrants trying to storm past the razor-wire fence.

International charity Save the Children said it was also concerned about a lack of basic services such as bathrooms and shelters for children in some of the official camps.

"Many of the children, especially lone children, have been through enough trauma already," said Amy Frost, its Greece team leader. "Relocations to formal camps need to be managed sensitively to ensure the process is not adding to the trauma."

The United Nations refugee agency UNHCR said Greece had to ensure the individuals now had access to asylum.

"That has been an issue - making sure Greece has this capacity to do that. It is something that we have to continue to watch," spokesman Adrian Edwards told a briefing in Geneva.

A sharp rise in asylum applications since the EU-Turkey deal has burdened Greece's asylum system, already criticized as inadequate and slow.

Progress has also lagged on a scheme to redistribute 160,000 asylum seekers from Greece and Italy to other EU states to alleviate pressure on the two frontline countries. Just 1,145 people have been relocated so far.

"How long do we expect people – so many of whom have fled war and conflict - to be living in tents in refugee camps in Greece?"

[Additional reporting by Angeliki Koutantou in Athens and Stephanie Nebehay in Geneva.]

Refugees, migration a front-burner topic throughout 2016