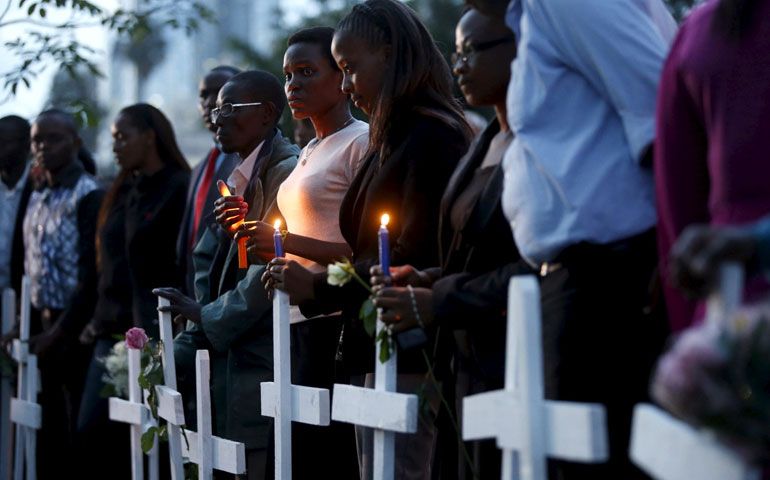 People attend a memorial vigil in Nairobi, Kenya, April 7, 2015, for the 148 people killed in an April 2 attack by al-Shabab militants on Garissa University College. (CNS/Reuters/Goran Tomasevic)

When a new president was installed on March 30 in the Central African Republic, religious leaders here and elsewhere hoped the event will signal a new beginning after four years of strife. Yet with Islamist insurgencies now spreading fear across much of the continent, peace and stability still look some way off.

"I hope our new head of state will gather people from east and west, north and south, and at last bring reconciliation," said Archbishop Dieudonné Nzapalainga, head of the Central African Republic's Catholic church. "But this will mean standing upright and working for our country's development, as well as understanding the fractures in our society and bringing justice for conflict victims."

Faustin-Archange Touadéra, a practicing Protestant, won the presidency with a two-thirds majority in the Central African Republic's mid-February election, conducted under the watchful eyes of heavily armed international peacekeepers.

The ballot had been repeatedly postponed because of violence in the country, one of Africa's poorest. A fifth of the population has fled fighting between mainly Muslim and Christian militias. But church leaders urged Catholics to vote, and believe the peaceful outcome owed much to a late November visit by Pope Francis to the capital, Bangui.

"The Holy Father's presence was a decisive, catalyzing moment -- he came as a messenger of peace and gathered Christian and Muslim communities together," Nzapalainga told NCR. "Since then, we've felt a wind of peace blowing through our country. There's been a total turnaround and people are looking with hope to the future and turning away from the past of daggers, machetes and destruction."

The Catholic church's nine dioceses make up a third of the 4.4 million inhabitants of the Central African Republic, where a rebel movement calling itself Seleka suspended the constitution in March 2013 after ousting President François Bozizé. Co-led by Arab-speaking Islamists from Chad and Sudan, Seleka was driven back after the January 2014 deployment of French and African peacekeepers.

But bloody clashes continued between rival Christian and Muslim militias as a transitional government grappled to reassert control, until Touadéra, a former prime minister, won the presidency as a "candidate of the people," promising to make the Central African Republic "prosperous, just and fraternal" again.

Meanwhile, other countries in the region are also struggling to contain Islamist-backed insurgencies that have risked pitting Christians and Muslims against each other. Recent outrages in Burkina Faso, Mali and the Ivory Coast, all viewed as Western allies against Islamist militancy, have highlighted insurgent co-ordination.

"These groups reject Western values and Muslims who won't accept Shariah law, and are trying to attract world attention with their attacks," explained Rafael D'Aqui, an expert with the Catholic charity Aid to the Church in Need. "They've obtained huge sums from Saudi Arabia and elsewhere to build mosques where there were previously no Muslims and train imams in a hard, radical school. There's talk of a militant Muslim fraternity, intent on invading Christian areas."

In northern Mali, ethnic Tuareg rebels overran a swathe of territory in 2012, operating alongside Islamist fighters driven out of neighboring Libya after the fall of Moammar Gadhafi.

France, the former colonial power, intervened here, too, in January 2013, driving the rebels back to the mountainous Algerian border after they had imposed Shariah and vandalized the fabled Timbuktu. Yet guerrilla raids continued, alongside sporadic attacks on churches and presbyteries, raising fears that the Islamists could regroup.

Under a June 2015 U.N.-brokered peace deal with the Mali government of President Ibrahim Boubacar Keita, regional assemblies are to be elected and rebel Tuaregs integrated into national security forces.

However, last November, as Islamic State-linked terrorists launched bloody attacks in Paris, assailants from al-Qaida in the Maghreb and a Malian offshoot, al-Murabitoun, occupied a hotel in Bamako, the Malian capital, leaving 20 hostages dead. This February, they launched another attack on a U.N. mission in Timbuktu.

Religious leaders from the predominant Muslim population condemned both outrages. But Fr. Edmond Dembele, secretary-general of the Episcopal Conference of Mali, admits that Christians who fled the advancing Islamists still feel unsafe to return.

"Ordinary Christians and Muslims have always lived well together here, attending each other's ceremonies and sharing in community life, so our church is shocked at what's happened," Dembele told NCR. "We know there's a minority of Muslims who'd like to see things change. But they're just a small group; and while we're all equally affected, I'm confident we can withstand these attempts to sow fear and stir interreligious conflicts."

Courage and firmness will be needed in making good that pledge.

But in mid-March, al-Qaida was back, this time in the Ivory Coast, with a high-profile attack on a beach resort in Grand-Bassam that left at least 16 dead.

Tensions have been rising all over French-speaking Africa. In Senegal, security was tightened this January after the arrest of Islamist militants; in Niger, Muslims destroyed 45 Catholic and Protestant churches during two days of frenzied rioting in January 2015.

Niger's newly retired Archbishop Michel Cartateguy has also pledged to uphold friendly ties with the predominant Muslim community. But he's warned that the anti-Christian violence, which left a dozen dead, was "well thought-out, prepared and organized."

"Some local Muslims, young included, showed courage and solidarity by sheltering Christians in their family homes -- while others stood in our church doorways saying the rioters would have to kill them as well," said the Niamey-based archbishop, whose church shares its bishops' conference with Burkina Faso and runs a joint commission for Islamic-Christian dialogue. "But we're still in the dark as to why this fury erupted and precisely who was behind it. Although the authorities did what they could, they had trouble controlling the situation."

Niger's resource-starved president, Mahamadou Issoufou, insisted the rioters "understood nothing about Islam," and has helped rebuild the destroyed churches. Like other regional rulers, he's blamed agitators from Nigeria's extremist Boko Haram movement and vowed to crack down on militant Islam.

Formed in 2002, Boko Haram publicly allied itself with the Islamic State group in March 2015 and has killed at least 17,000 Nigerians during a seven-year insurgency. The group operates at will in Niger and Chad, and has left 2.3 million displaced and 5.6 million facing hunger, according to a March U.N. report.

In 2013, Christian churches welcomed a government state of emergency in northern areas, as efforts were made to rein in Boko Haram's brutality. But some prominent churchmen, including Archbishop Ignatius Ayau Kaigama of Jos, president of the Catholic Bishops' Conference of Nigeria, have doubted whether military efforts can stem the violence.

Islamists are now posing hazards across the continent in Kenya, where groups linked to al-Qaida vowed revenge after local troops invaded neighboring Somalia in 2011 to help quell a Muslim insurgency there. In September 2013, gunmen from Somalia's Al-Shabaab group attacked Nairobi's upmarket Westgate shopping mall, leaving 67 dead and more than 175 wounded. In April 2015, they murdered a further 148 in a school shooting spree at Garissa.

Meanwhile, Christian-Muslim tensions have also been mounting in Tanzania, where 120 Muslims were arrested, including Sheikh Issa Ponda, the Council of Imams head, after Islamist protesters attacked churches in Dar es Salaam in autumn 2012.

Some observers think the violence reflects a 1989 "Abuja Declaration," issued by a Nigeria-based organization with offshoots in some 20 countries. This demanded the eradication of Christianity and continent-wide imposition of Shariah, and called for only Muslims to hold "strategic national and international posts."

"The recent campaigns can't be seen as isolated or separate -- we have to conclude they reflect interference from outside," Bishop Tarcisius Ngalalekumtwa, president of the Tanzania Episcopal Conference, told NCR. "Ordinary Muslims have nothing against the Christian religion and Catholic faith -- the only ones who do are fundamentalists, pressed and influenced from abroad. But we're all affected by the intimidation, and are meeting and praying to encourage each other."

Violent Islamist groups have also been reported in Burundi, Rwanda, South Sudan and the mineral-rich Democratic Republic of Congo, widely considered Africa's most Catholic country, where up to 5.4 million people were killed in wars involving two dozen armed groups in 1995-2003.

Meanwhile, concern has risen this year for Christians in northern Cameroon, where Boko Haram marauders have already killed 1,100 civilians and 65 police and troops, according to government data. Radio France International reported that interfaith "watch committees" had placed mosques and churches under guard during Friday prayers and Sunday services, and helped prevent civilian victims in five separate suicide bomb attacks March 10-13.

However, Catholic groups say Boko Haram still regularly takes control of whole villages, abducting child hostages to be used in random attacks. As elsewhere in Africa, Western missionaries, on whom local church life depends, have had to be withdrawn after a spate of abductions.

"They know if you strike the head, you strike the whole body -- that's why they're spreading fear among Christian communities," explained D'Aqui, from Aid to the Church in Need. "We count on Western Christians to back efforts to protect and reinforce these endangered church communities, helping them find ways to survive and develop."

Effective solutions, D'Aqui says, will depend on military deployments and security measures, but also on humanitarian assistance, the tackling of poverty and inequality, and investment in grassroots infrastructure.

While Boko Haram has stirred youthful hearts and minds with its Islamist indoctrination, it has also exploited economic hardships, offering money and prospects to those who embrace its fundamentalist creed.

"Most of our staff are Muslims, and interfaith relations were always positive and mutually reinforcing here," said Niek de Goeij, representative of U.S. Catholic Relief Services in Mali. "But while there's a rapidly growing population here, youth opportunities are extremely limited, and there's a great waste of human capital which any terrorist or criminal group can exploit. There's a real need for viable alternatives in jobs and livelihoods."

Such aims will loom large for Touadéra as he takes office in the Central African Republic. The ravaged country's Supreme Court is still investigating fraud in the presidential elections, while sexual abuse charges have been leveled against the 10,000-strong African peacekeeping force, currently patrolling alongside French troops.

With sporadic attacks continuing from Seleka remnants and other groups, measures must urgently be taken to secure disarmament and the rule of law; foster national reconciliation; and rebuild health care, education and social services.

But Imam Omar Kobine Layama, president of the Central African Republic's Islamic Council, agrees that Pope Francis' late 2015 visit helped place the country on a road to recovery, by delivering a conciliatory message that might just reach Islamist militants.

"We counted on the Holy Father to bring a clear message about the unity of believers, interfaith dialogue, human rights and peace, which could really liberate us and help rebuild social bonds," the imam, who's twice visited the Vatican in a bid for peace, told NCR. "The ideology professed by extremist groups like Boko Haram hasn't found sympathizers here, and our own imams have advised against any contacts with it."

Nzapalainga concurs. "The bell of dialogue and negotiation is sounding here, along with the bell of compromise and consensus," the archbishop told NCR. "If we speak harsh words about our national fractures, we also have to see and understand them clearly. In this Year of Mercy, let's hope former enemies hear this new message of peace."

German religious superiors: The church must have greater confidence in the faithful

Understanding persecution of Christians in the Middle East