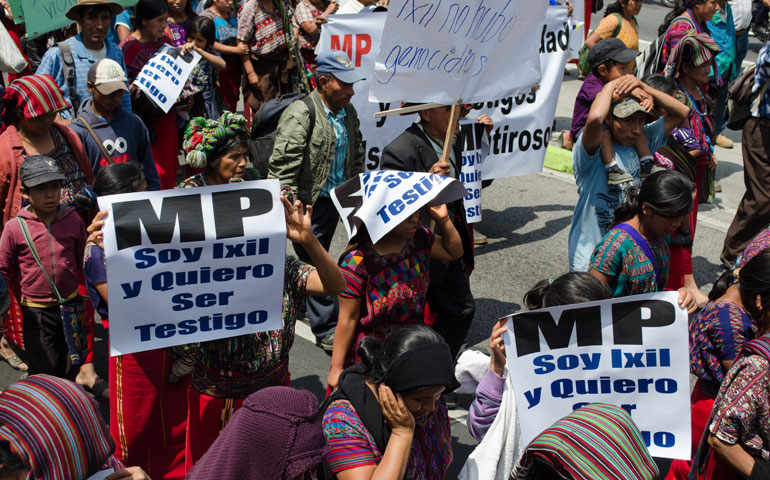 Ixil Maya, including ex-members of paramilitaries, demonstrate in Guatemala City April 23 against the trial of Efraín Ríos Montt, holding signs saying, “I am Ixil and I want to be a witness” and “There was no genocide.” (Werner Monterroso)

After nearly two weeks of suspense, popular pressure and legal challenges, a three-judge tribunal has retaken control of the Guatemala genocide trial of former head of state Gen. José Efraín Rios Montt and his intelligence chief, Gen. Mauricio Rodríguez. The trial, which has heard some 150 witnesses, had been winding up when a magistrate from another court caused it to halt on a technicality April 18 just as final arguments were expected. It resumed April 30 in an atmosphere of contending political forces, unresolved legal challenges and high emotion.

Former government figures once considered moderate, including some who worked on peace accords finalized in 1996, have called the process potentially destabilizing, a charge met with indignation by trial supporters. The very existence of the trial lays bare the polarization that has continued to exist here for years below the surface of daily life.

“These are days of risk,” said Nobel Peace laureate Rigoberta Menchú Tum, who has been attending the trial.

On April 23, 500 Ixil Maya from the area named in the case, a remote highland region known as the Ixil Triangle, arrived on hired buses to declare, “There was no genocide.” They marched in traditional red woven dress of Nebaj, the largest of the Triangle’s three towns, under hot sun over the course of the day, from the U.S. Embassy (“So they know we are here,” one said) to a plaza outside the Supreme Court and through the busy city center, stopping traffic, to the Constitutional Court where magistrates now have become involved in procedural rulings. Marchers’ signs condemned foreigners and nongovernmental organizations for self-serving interference. “Donors, quit financing manipulators,” said a hand-painted mantle.

The cost and focus on the genocide trial is preventing attention to development of their remote region, an intolerable continuation of the war by other means, demonstrators said. Promised reparations are being sidetracked. The protest was organized by groups in the Ixil region, including ex-paramilitary patrollers with a Guatemala City-based foundation whose members are former army officers. The foundation has published pages of advertising during the trial accusing the “Marxist [Catholic] church” and liberation theology of fomenting the 1980s violence.

According to U.N. estimates, some 200,000 persons died in the course of a 36-year conflict that ended in 1996, the majority unarmed civilians suspected of supporting leftist guerrillas. Ríos Montt, 86, who appeared alert to court proceedings, consulting with defense attorneys, was head of state during the most intense bloodletting, 18 months in 1982-83. After years in which international tribunals have acted against alleged war criminals under the principle of “universal jurisdiction” -- the concept that some crimes are so egregious they constitute an affront to all humanity and can be tried anywhere -- Guatemala draws attention as a landmark in international jurisprudence, the first trial for genocide to take place against a former head of state in the country where the crime occurred.

“This is where we wanted the process to be heading all the while,” said an attorney who has been working on a case against alleged Guatemala war criminals before the Spanish National Court that began in 1999. “This is where such crimes should be brought to process, when the moment arrives, at home.” Others suggest trying a war criminal on native land means the public sees its past up close, with a sense of participation -- trial sessions are open to the public and broadcast -- and a trial in national courts can serve to strengthen a maturing justice system during delicate transitions to democracy.

At the same time, international involvement in the outcome of the trial is intense. Abroad, jurists, lawyers’ associations, human rights watchdogs, and groups of notable international figures such as the Nobel Women’s Initiative weigh in with support for the process, made known locally in the media. As the prospect of derailment loomed, representatives of United Nations offices and the diplomatic corps were more noticeable in number observing sessions, sometimes in the front row. Judges and prosecutors from Chile, Argentina, Uruguay and Peru who have been responsible for successful trials in which key government figures were found guilty of wartime crimes have appeared to support the Guatemalan process.

“It is this identification of individuals that permits peace and reconciliation,” Stephen J. Rapp, U.S. ambassador at large for war crimes issues, told La Hora, a local newspaper. During three days of consultations and meetings on the Ríos Montt trial, Rapp said that resolving the issue in court “establishes that it is not Guatemala that committed genocide, nor great groups of people, but that individuals give orders and cause these things to occur.” The process needs to go forward, he said, “for Guatemala, the region and the world.”

Washington backed the Guatemalan administrations that oversaw the war, nearly all military dictatorships subsequent to a CIA coup that overthrew a democratically elected president in 1954. The current U.S. ambassador to Guatemala, Arnold A. Chacon, has attended sessions, and other embassy personnel attend regularly among members of the wider diplomatic corps.

Outside the Constitutional Court, one of a dozen women holding up a huge patchwork quilt commemorating lost family members, Aura Elena Farfán, seemed unfazed with the slow process. Farfán’s brother disappeared in the 1980s and she is a founder of an organization of family members of the dead and disappeared, known by its Spanish acronym, FAMDEGUA. FAMDEGUA organized the exhumation from a well of remains of some of 300 persons slain by special forces during Ríos Montt’s administration, far from the Ixil, at a village called Dos Erres. After charges, delays, appeals, international tribunals and local trials, in 2011 officers among the perpetrators were sent to jail. “It took 10 years,” Farfán said.

No matter the outcome, the effects of the genocide trial are likely to permeate Guatemala’s air for time to come, as versions circulate of the words of the country’s other Nobel laureate, for literature, Miguel Angel Asturias, who wrote, “The eyes of the buried ones shall close on the day of justice, or they shall not close.”

[Mary Jo McConahay is the author of Maya Roads: One Woman’s Journey Among the People of the Rainforest. She covered the wars in El Salvador and Guatemala for several publications.]

A version of this story appeared in the May 10-23, 2013 print issue under the headline: Guatemala genocide trial back on track after suspension.