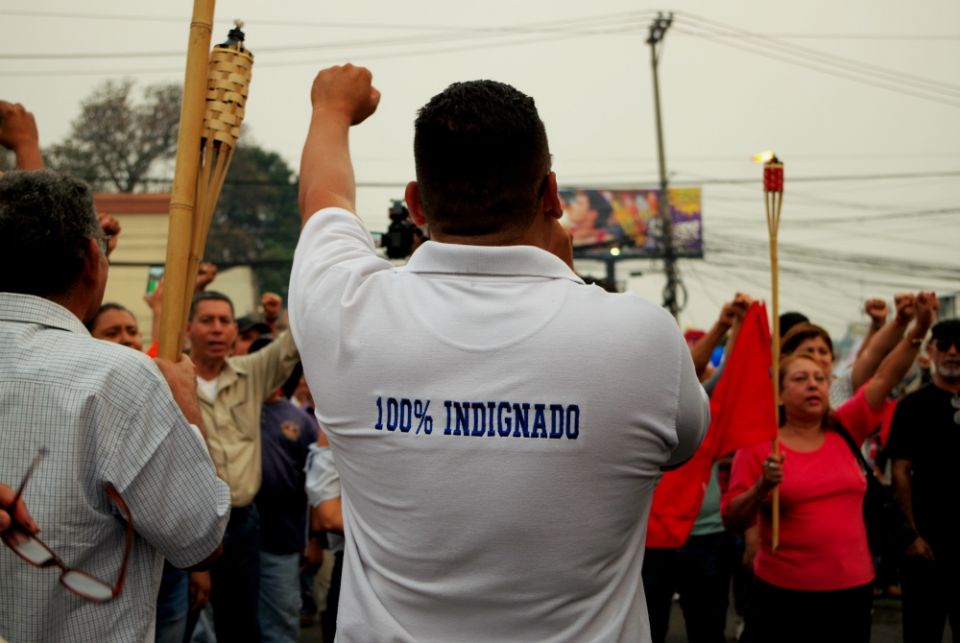 The Honduran bishops emerged from their plenary assembly June 3-7 with a scathing assessment of their government's handling of recent conflicts in the country and a heartfelt cry of "¡Basta ya!" "Enough!"

They warn in a June 6 message from the Episcopal Conference of Honduras that if the management of future issues doesn't improve, "the consequences could plunge Honduras into a very difficult crisis to overcome."

While they address the Honduran people in their letter, the bishops' focus on structural issues that are driving protests and migration also has implications for U.S. policy, several U.S.-based experts on Honduras said.

Differing from some advocates who say more U.S. aid can address the violence and poverty that fuel migration from Honduras, multiple people with connections to the region told NCR that U.S. support of a government many consider illegitimate, inept and corrupt actually exacerbates the deeper root causes the bishops highlight.

"They talk about the roots of economic and military violence in the letter, not just gangs, and I think that fact that they're talking about systemic and structural injustice, social and economic injustice that has brought people to the brink of not being able to live anymore is what is significant in this letter," said Jennifer Atlee, coordinator of the Friendship Office of the Americas, which runs a Honduras accompaniment project known as PROAH. 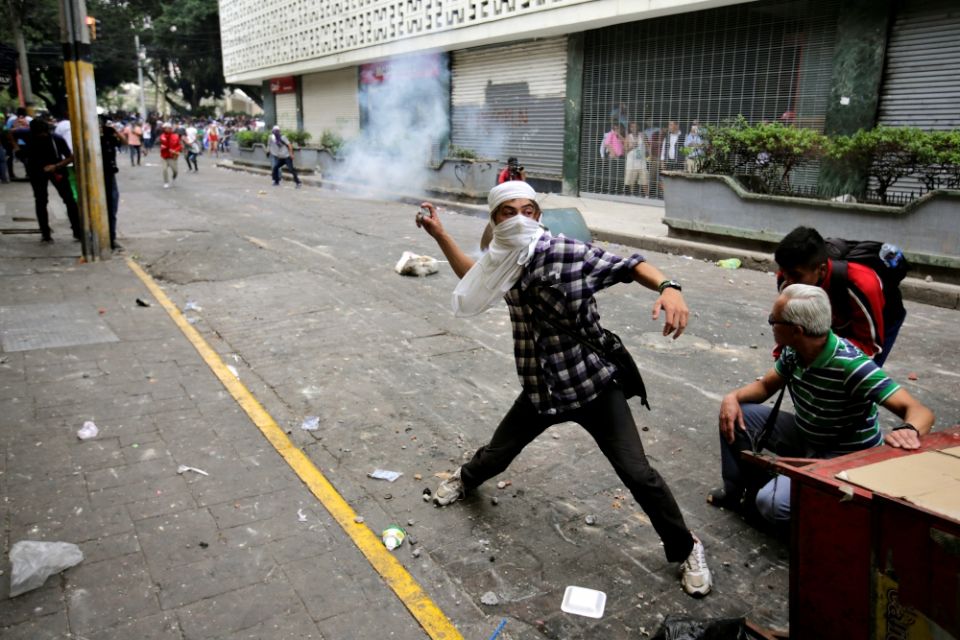 A demonstrator throws a tear gas canister back to riot police April 30 in Tegucigalpa, Honduras, during a protest against government plans to privatize health care and education. (CNS/Reuters/Jorge Cabrera)

The bishops name "the high cost of living, crime and violence, unemployment, serious shortcomings in the health and education systems, and corruption" as the problems they believe most worry Hondurans. They add that problems with the legislature, executive branch and state-owned utilities could also spawn conflicts "as serious or more so than those that we're living through today regarding health and education."

Recent attempts by the government to modify the health and education systems in what many see as a move toward privatization have sparked intense protests during the past month, including a national strike.

James Phillips, an author and former Jesuit who is an affiliate professor of anthropology at Southern Oregon University, suggested the reason the bishops are speaking out more strongly than they have in the recent past could be a desire to combat a general sense of "tiredness and depression" in the face of a government many consider a de facto dictatorship.

They could also be motivated by concern about the high levels of emigration from Honduras or wish to promote dialogue to prevent conflict from turning into a civil war, he said.

June 28 will mark the 10-year anniversary of a coup d'état in Honduras that ousted a democratically elected leader. Although the new leadership was recognized by the U.S. and has received its support, many Hondurans consider their government illegitimate, especially because of concerns with the validity of elections in the intervening years. 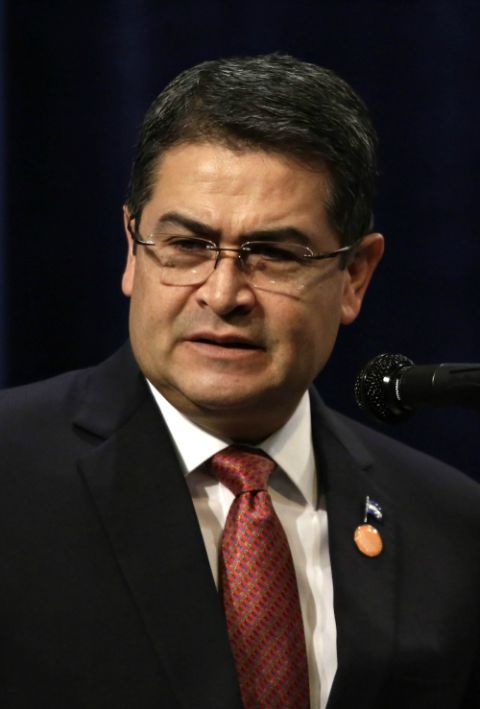 Most recently, President Juan Orlando Hernández was reelected "illegally and unconstitutionally" in November 2017, said Jean Stokan, a member of the Institute Justice Team for the Sisters of Mercy of the Americas.

Hernández wasn't eligible for another term under the constitution, and his victory is widely believed to have been rigged. His opponent, Salvador Nasralla, had an apparently irreversible lead before the electoral tribunal suddenly stopped reporting returns; Nasralla's lead quickly disappeared when the reports were resumed days later. The U.S. recognized the election results despite concerns from the Organization of American States.

Hernández has recently moved to consolidate power with the executive branch and "destroy the independence of both the Congress and the Supreme Court," Phillips said, an issue that the bishops mention in their letter, alongside constitutional violations and a Congress they describe as "a theater of horrible actors, turning their backs on the people."

The past decade has been characterized by increased corruption, drug trafficking, gang violence, and human rights violations on the part of the state, as well as economic and environmental issues, all three experts told NCR.

Providing security aid to the police and military only funds state-sponsored repression, while even humanitarian aid legitimates a government that most Hondurans see as illegitimate, Stokan said. "It's not a few nice projects that are going to change the situation, or a few job training programs. Programs will not change the situation. What is needed is radical policy change."

Stokan, Atlee and Phillips all promoted the Berta Cáceres Human Rights in Honduras Act, a bill in the U.S. House of Representatives named after a murdered indigenous and environmental activist. The act would suspend security funding to Honduras due to human rights abuses.

Stokan also joined Atlee and Phillips in identifying U.S.-supported economic policies, including free trade and an "extractive" model of development that often leads to landlessness and poverty, as major root causes in Honduras that the bishops' letter alludes to but doesn't discuss in detail.

Instead, much of the bishops' attention is devoted to the political situation. Though they call on all Catholics and people of goodwill to work toward improving conditions, the bishops place most of the blame with the "state powers" that they say "in some cases are the source of the problems" and in others aggravate issues' divisiveness through inaction.

The bishops call for more transparency surrounding elections, worry about the "paralyzed" economy and the "disgraceful sale" of Honduras' natural resources, and criticize the corruption of state institutions. 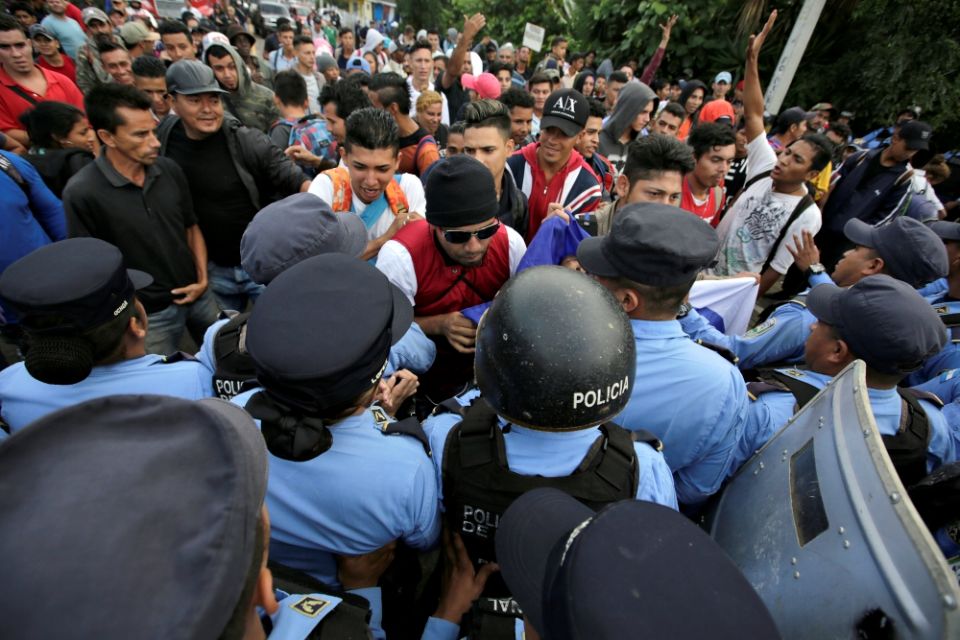 Trying to join a caravan headed to the U.S., migrants scuffle with police at the border with Guatemala Oct. 19, 2018, in Ocotepeque, Honduras. (CNS/Reuters/Jorge Cabrera)

Atlee traces the emergence of drug cartels to the corruption of the regime the coup introduced; she noted that even Hernández himself had been investigated by the U.S. Drug Enforcement Administration in connection with drug trafficking and money laundering. (It is unclear if the investigation is ongoing.) Corruption also siphons off money from social services, Phillips said.

Faced with so many problems, the bishops call "painful and understandable" the "indignation of the majority of the population, the suffering of the most poor, the disappointment of the youth, the fear of the migrants, the anguish of the sick, the helplessness faced with corruption and impunity, the exhaustion of those who fight for a better Honduras without seeing results."

They say recent "false reform" of the penal code only increased protections for corrupt people and "narco-politicians" under the guise of making improvements and "toughening sentences for those supposedly most 'dangerous,' who are usually marginalized youths and poor people desperate to survive."

Atlee described the bishops' letter as "a response to the crisis that just continues to deepen and become more extreme."

"It's one statement among many sectors, from the teachers, from the medical sector, from the campesino sector, from indigenous people, from Afro-descendants, from the human rights community, all have been speaking out very, very forcefully and I think the church realized that they also need to walk with the people," she added.

While the bishops devote a brief paragraph to criticizing protests with violent elements, the letter largely expresses sympathy with protesters — who Phillips noted are also targeted by the penal code reform.

They condemn disproportionate police violence and assert that "the authority becomes illegitimate and loses the right to be obeyed" when it doesn't promote human dignity and the common good.

"Often, society's protest demonstrations aren't meant to attack politicians, but to defend itself from them and from their abuses," the bishops add.

The letter ends with a call for state institutions to "fulfill their duties" and for the entire society to search for solutions, whether through "pacts, agreements, reforms, movements, plebiscites or referendums, citizen-initiated laws, etc."

"Let's become aware that a change for the better is possible and make the commitment to achieve it in solidarity," they say before entrusting the process to Our Lady of Suyapa, patroness of Honduras, and concluding the letter.

A version of this story appeared in the July 12-25, 2019 print issue under the headline: Honduran bishops critique their government's role in conflict .

Obama lifts the veil on the establishment and Mideast allies