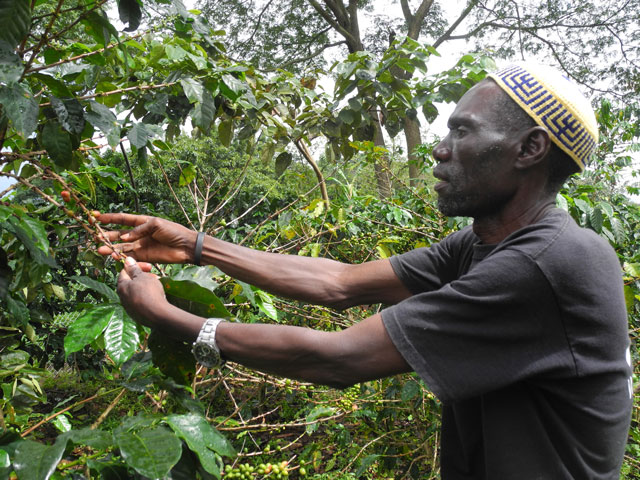 JJ Keki checks a coffee plant next to the Delicious Peace coffee cooperative's drying shed in the Mbale region of Uganda. (Photos by Melanie Lidmane)

JJ Keki, a Jewish farmer from eastern Uganda, was far from home on the morning of Sept. 11, 2001. He was in New York City on a fundraising tour, and had planned to tour the observation deck of the World Trade Center later that day. As he watched the twin towers crumble, he worried about the wave of hate and intolerance sweeping across the entire world. He was especially concerned about his home in East Africa, where Muslim extremists from Somalia were advancing toward Kenya and Uganda.

Eastern Uganda is a unique pocket of the country known as the "pearl of Africa." The rolling hills at the foot of Mount Elgon are bursting with green. Crops grow well in the region, but the lack of proper techniques and the region's severe poverty mean that farmers barely grow enough food to survive, and never move beyond subsistence farming.

But an interfaith coffee cooperative called Mirembe Kawomera, which translates as "Delicious Peace" in the local language of Luganda, is aiming to combat the threat of religious violence and poverty at the same time. More than 2,000 Muslim, Christian and Jewish farmers have joined the cooperative since Keki started organizing the community in 2004.

Uganda is 84 percent Christian and 12 percent Muslim, though Muslims are a majority in the Mbale region of eastern Uganda. There is also a tiny community of 2,000 indigenous Ugandan Jews in the area.

The Sept. 11 attacks were "religious-motivated violence, and I said to myself, this could happen in Uganda, too," Keki recalled while showing off the new drying house for the season's harvest. "We must do something. So in 2004, we started this co-op. The Muslims also said they didn't want the violence to come here. They said, 'We're already brothers. Even though we have differences, we don't want to fight and kill each other.' "

Relationships between the three religions were cordial but distant before the coffee co-op began. There was some animosity stemming from Idi Amin's brutal dictatorship in 1971-79, when he outlawed Judaism and killed a number of Catholic bishops. But after the land disputes stemming from the war years were resolved, the three communities lived as uneasy but quiet neighbors.

Today, Ugandans are worried about the influence of extremist Muslim violence. The Somalia-based al-Shabab terrorist group carried out attacks in neighboring Kenya, including the Westgate mall attack in September 2013. Ugandans constantly worry that these kinds of terrorist attacks will creep across the border.

The Delicious Peace interfaith cooperative is a pre-emptive strike against that fanaticism, by creating close working relationships across religions. This means children grow up in a more tolerant environment, watching their parents join Easter, Hanukkah and Ramadan celebrations with the neighbors.

A coffee cooperative is an effective economic tool for the community. Individual coffee growers face a tough market, especially those in isolated rural villages, because transportation on bad roads is so expensive and problematic. On their own, farmers have no power to negotiate for a better price if they feel the offer is too low. Because they have so little coffee to sell, buyers are loath to make the journey, and the farmers are forced to take rock-bottom prices.

But selling their product together as a cooperative gives them much more leverage in the market and helps raise the economic level of the entire community. Additionally, fair trade certification means that farmers are guaranteed a price "floor" of minimum payment, safeguarding them from the volatile coffee market.

The cooperative got certified as a fair trade coffee producer, and it exported its first coffee in 2005, within a year of its founding. The cooperative started with 250 farmers, and today has more than 2,000 members.

"Since we formed the co-op, there has been a working relationship between the religions," said Samuel Ngugo, a Protestant who has served as the cooperative's treasurer since it began.

Reflective of the region's population, the majority of the farmers are Muslim, but the board of the cooperative includes representatives from every religion. The cooperative also holds bimonthly lectures to help members improve their coffee production.

"There wasn't a problem [between religions] here, but we didn't know this aspect of working together," said Elias Hasulube, a Muslim who serves as a manager and senior field officer who oversees quality control. "The coffee cooperative has also helped the community grow -- it supports primary schools from all three religions."

Ngugo added, "Since we formed the co-op, farmers have the chance to sell coffee at a higher amount, and this means they can pay school fees and build new houses."

In addition to growing coffee, farmers also formed a number of interfaith musical groups that adapt local songs to sing about coffee: the economic benefits, gratitude to the organizers, encouragement, and even tips for growing the best type of coffee. Rabbi Jeffrey Summit of Tufts University recorded an album called "Delicious Peace: Coffee, Music & Interfaith Harmony in Uganda" to celebrate these songs. Music is so interwoven into daily life in Uganda that songs are the ideal vehicle for passing on knowledge about proper growing techniques and interfaith cooperation.

Actor Ed O'Neill, who plays Jay Pritchett on the popular U.S. sitcom "Modern Family," narrated a documentary about the Delicious Peace cooperative in 2010.

The leaders of Delicious Peace are hoping to export more than just coffee. They want to export their story of interfaith cooperation as well. They proudly print their story on each bag of coffee, which is sold by the American fair trade company Thanksgiving Coffee.

"Whoever hears our story says, 'Why are we fighting?' " Hasulube said. "The more we get customers and they read the story on our packages, the more we'll get that message across."

Keki said, "Our coffee has a wonderful story that we want people to copy, like Israel and Palestine. Our coffee must teach the world that even if you have differences in religion or culture, you can still be good friends."

[Melanie Lidman is the Global Sisters Report correspondent for Africa and the Middle East. She is based in Israel.]

A version of this story appeared in the May 8-21, 2015 print issue under the headline: Interfaith coffee cooperative exports more than just beans.