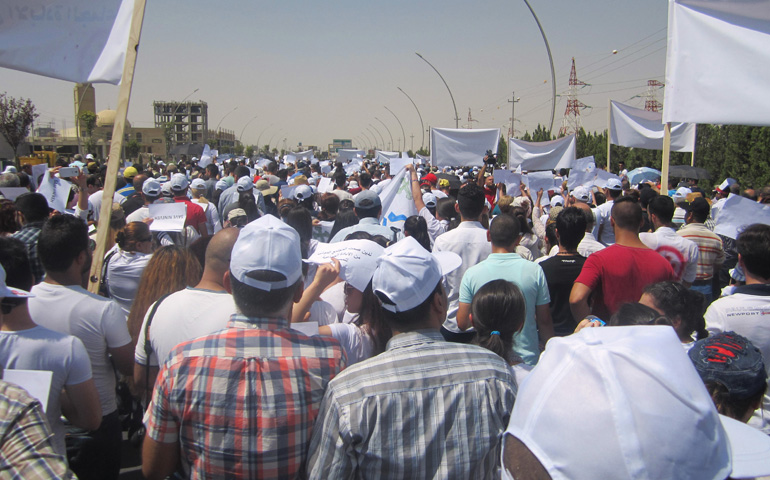 Christian refugees march against persecution by Islamic State fighters July 24 outside the U.N. compound near the airport in Irbil, Iraq. (CNS/Sahar Mansour)

Iraqi Christian refugees braved temperatures as high as 122 degrees to demand that the United Nations intervene to protect them from persecution by Islamist militants.

Sahar Mansour, a Chaldean Catholic who fled Mosul, Iraq, in June, told Catholic News Service by email that she saw some of the demonstrators faint in the heat as they marched from their refugee camp in Ankawa to the U.N. base in Irbil.

"We were holding banners in Arabic, English, Chaldean and French against the violence that happened in Mosul and [questioning] why the world was in silence against our problems," she said.

"There were [a] few Muslim leaders with us sharing our concerns," said Mansour, a lecturer in chemistry at the University of Mosul.

"The weather was so hot that some people were fainting, but we encouraged each other to convey our voice and pass the message to the U.N."

Many wore T-shirts or held up banners emblazoned with the Arabic symbol for "N," which was painted on the houses of Christians in Mosul to designate them as "Nasara," or Nazarenes, a derogatory Arabic term for Christians, before they were ordered to leave the city, convert to Islam, or face death.

About 500 people joined the July 24 protest. Most were refugees who had fled Mosul, the biblical city of Ninevah, 55 miles west of Irbil, before it fell to Islamic State fighters who invaded in June and July.

They were joined by other Christian refugees who had fled the militants from neighboring Syria, and by a small number of Muslims, including imams.

Chaldean Catholic Archbishop Bashar Warda of Irbil and by Syriac Orthodox Archbishop Nicodemus Daoud Matti Sharaf of Mosul led the demonstration. At the U.N. base, they asked that the Iraqi federal government accept the legal responsibility for the humanitarian relief and compensation for all innocent civilians harmed by the fall of Mosul.

The bishops also requested that the international community, as well as Iraqi armed forces, take action to protect the Christians of Iraq, Mansour said.

She said protesters were not only angry about being driven from their homes by advancing Islamic State fighters, who want to establish a Sunni Muslim caliphate across the Middle East, but by the world's "silence" at the injustices they were suffering.

Mansour said that at the demonstration some Christians had expressed anxiety about reports that Islamic State fighters had ordered all girls and women to undergo female genital mutilation and that Muslims were also "very worried about it."

She said she had also heard horrific accounts of violent forced conversions of Christians who were unable to flee Mosul because of ill health, for instance, or disability.

"I hope one day I wake up and see myself and my family outside Iraq," Mansour said. "It is impossible to live under control of ISIS," the Islamic State.

"I did not imagine one day that I will live like this, without human rights, drinking salty water out of wells, without electricity, without a house, in the heat," she continued.

"We have nothing now, just our clothes that we wear," she added. "I am worried about the future -- if there is future. You know, nowadays, all of us are thinking that today is the last day we are alive."

Mansour and her family are among 3,500 Christian families encamped around Ankawa, where classrooms have been turned into dormitories, some sleeping 20 refugees every night.

But the unsanitary conditions have led to the spread of typhoid and other diseases among the refugees, she said.

"We have not got water, electricity, medicine, Internet, all the essential things for life -- we do not have it," she said. "Also the government did not give us, all the people in Ninevah, our salary, we are now two months without income."

The majority of young Iraqi Christians have known only war and unrest for decades, and most now want to live in Europe, she said.

"I am one of these persons who want to leave Iraq and live outside," said Mansour, who has studied in England and now wishes to emigrate there. "There is not any life in Iraq with ISIS and jihadists."