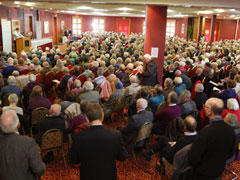 Irish Catholics gather in Dublin May 7 for a meeting hosted by the Association of Catholic Priests. (Photos by John McElroy)

DUBLIN, Ireland -- "A real experience of hope and of the presence of the Spirit among us all" -- that's how organizers of a major meeting of Irish laity, religious and priests to discuss the future of the Irish church described the May 7 event.

Hosted by the Association of Catholic Priests, which represents about 25 percent of Ireland's active clergy, the event heard repeated calls for a return to the spirit of the Second Vatican Council and a culture of dialogue within the church.

Titled "Towards an Assembly of the Irish Catholic Church," the participants agreed such dialogue should "work towards establishing appropriate structures that would reflect the participation of all the baptized."

It "should take place at parish, diocesan and national levels" and "address all issues facing our people at this time of crisis," a closing statement affirmed.

The conference agreed on the need to recapture "as a matter of urgency" the reforming vision of Vatican II and called on all who were "concerned with the future of our church, including our church leaders, to participate in this dialogue."

Fr. Brendan Hoban of the Association of Catholic Priests said he initially expected about 200 people to turn up. In the end, more than 1,000 people packed into a hotel conference room to share their common faith and express hopes and fears for the future of the faith.

Hoban told participants that he had received messages from a few bishops and papal nuncio Archbishop Charles Brown -- a former official at the Vatican's Congregation for the Doctrine of the Faith -- wishing the event well. Ireland's hierarchy were, however, conspicuous by their absence, with some delegates expressing disappointment at the lack of episcopal participation.

Joe Mulvanney, a parishioner from Dublin, lamented the fact that many parishes have hemorrhaged members in recent years. "The biggest number we have has walked away," he said. As soon as the "wonderful" Vatican II was over "and all its 16 documents" it was "taken back from us," he said to sustained applause.

The meeting came just weeks after a Vatican-sponsored investigation into the Irish church criticized what it described as a "fairly widespread" tendency among Irish Catholics "to hold theological opinions at variance with the teachings of the Magisterium."

The report of that apostolic visitation -- conducted by Cardinal Sean O'Malley of Boston; Cardinal Timothy Dolan of New York; Cardinal Thomas Collins of Toronto; Cardinal Cormac Murphy-O'Connor, retired archbishop of Westminster, England; and Archbishop Terrence Prendergast of Ottawa -- warned that "dissent from the fundamental teachings of the church is not the authentic path towards renewal."

Despite that, there is little doubt that the Dublin assembly represents a significant challenge to the Vatican's authority and the contention of the apostolic visitation report that the "serious situation [in Ireland] requires particular attention, directed principally towards improved theological formation."

The meeting heard calls for the full inclusion of women in every aspect of ministry within the church and an end to mandatory celibacy. There were also heartfelt pleas for the church to reach out more to homosexual Catholics and those Catholics who have divorced and remarried. However, there were also a few dissenting voices. One young man made an emotional intervention accusing the Association of Catholic Priests of "trying to split the church."

Another younger Catholic, Gary Keogh, who addressed the event, said he felt that it was "difficult to envisage how the church could reconcile itself with the Irish people on issues such as celibacy and the role of women without major reform."

A recent survey sponsored by the Association of Catholic Priests and conducted by the respected pollsters Amárach Research showed just how far many Irish Catholics are from the thinking of the church on key issues.

Eight-seven percent of Catholics believe that priests ought to be allowed to get married and 77 percent say that the church should admit women to the priesthood, the survey found.

When asked, "To what extent do you agree with the Catholic church's teaching that any sexual expression of love between a gay couple is immoral?", 61 percent of respondents said they disagreed, while just 18 percent believed homosexual acts to be immoral.

The survey sampled 1,000 Catholics and has a margin of error of plus or minus 3 percent.

While the conference was upbeat and marked by a sense of determination, the age profile of participants was decidedly skewed toward the "third age." It was clear that many attendees had vivid memories of Vatican II and several speakers lamented the absence of younger people at the event.

One younger participant, 19-year-old Ben Conroy, warned of the limitations of such an event. While he said that "many of the reforms being proposed should be introduced on their own merit," it would not be a panacea for the church's problems. He recounted how "in a youth prayer group that I am a member of there are many young orthodox and conservative Catholics who love the church and do not support liberal reforms."

"We have to think of them too," he said.

The meeting comes at a tense time in the Irish church. A number of priests -- including Association of Catholic Priests founder Fr. Tony Flannery -- have recently been silenced or had their writing restricted by the Holy See -- a fact noted by a number of participants. One contributor from the floor said she longed for a church where there was "no room for silencing each other."

Theologian Cathy Molloy said many people were unaware of the distinction between "dogma and discipline" within the church. Some "unchallenged presentations have contributed to a kind of ritual public humiliation of some of our good priests," who "have not rejected any dogma of the church," she said, but sought to respond to concerns about "disciplinary matters such as celibacy and priesthood."

The church in Ireland has been reeling for almost 20 years now as a result of a punishing series of revelations of abuse and cover-up by senior clerics. Successive judicial reports have accused bishops and religious superiors of placing the reputation of the church and the avoidance of scandal ahead of child welfare when faced with abuse allegations against members of the clergy.

The Association of Catholic Priests was established less than two years ago to give a voice to a generation of priests formed around the time of Vatican II. The association's aims include the "full implementation of the vision and teaching of the Second Vatican Council, with special emphasis on: the primacy of the individual conscience; the status and active participation of all the baptized and the task of establishing a church where all believers will be treated as equal."

The challenge now for organizers is to keep the momentum going. Jesuit Fr. Gerry O'Hanlon -- a former provincial -- is acutely aware that it must move beyond talking. He said the vision of Vatican II had to be fully realized: "If you have co-responsibility, you have to have some power. You can't ask people to be responsible without power.

"In the Catholic church, we've been bad enough about living out the dream of Vatican II and listening closely to the voice of the faithful and giving them a say in the formation of teaching and governance," he said.

Just as Ireland has emerged as the epicenter of the church's global abuse crisis, so too, the Association of Catholic Priests hopes, the country will emerge as a beacon of hope for a church more based on dialogue. While some participants disagreed with the form that reforms should take, there was general agreement that it's good to talk.