Skip to main content
News
This story appears in the Francis in the Holy Land feature series. View the full series. 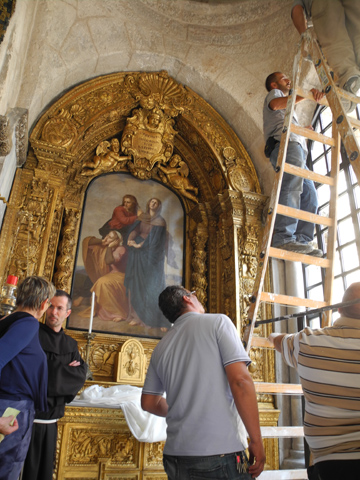 Fr. Sergio Galdi, secretary of the Franciscan Custody of the Holy Land, in the monk's habit, supervises last-minute renovations to the Chapel of St Mary of the Spasm in the Church of the Holy Sepulchre on Thursday in Jerusalem. (Melanie Lidman)

Pope Francis has inspired widespread enthusiasm across Israel ahead of his visit, but Israelis remain skeptical that the visit will significantly change religious and political tensions in the region.

In a whirlwind three-day trip from May 24-26, Francis will visit Jordan, Palestine and Israel. He will celebrate Mass in Jordan's capital of Amman and Bethlehem in the West Bank as well as visit a number of holy sites in the three countries between meetings with political and religious leaders.

The vast majority of Israelis welcome Francis' visit as a chance to show the world a side of Israel that supports the pope's message of tolerance and dialogue.

"Only good things will come from this visit," said Shemtov Shaltiel, 58, a building contractor from Jerusalem. "Good things only happen when you meet each other. If there are no meetings, nothing happens. It's all what people are imagining in their heads about each other, and that can be wrong."

Shaltiel added that the pope's visit will hopefully inspire other people to come visit Israel. "It's really good publicity for us," he told NCR. "If the pope comes here, tourists will come also. People think it's a war zone here, like people are getting blown up all the time. They think that if 10 people come to visit Israel, only two will come back alive."

Eli Naftali, a banker from Haifa in the north of Israel, where tensions between Jews and Arabs are calmer, said he hopes the pope will encourage more people in the powder keg of Jerusalem to live peacefully with their neighbors.

"I live in an area where from my balcony, I can look down and see houses of Arabs, both Christian and Muslim, and look to one side and see the Ba'hai Gardens," he said in an interview with NCR. "It's more relaxed and more fun to live in good relations with everyone."

"The fact that he's coming to visit is really nice," said 26-year-old Matan Saaida, a drummer in an alternative rock band, as he sat on the sun-dappled main street of Jerusalem and enjoyed coffee with his friends. "It shows Israel in a different light to the world. But it's not going to change anything. It's like the queen of England coming to visit. It doesn't really influence anything, but it's really nice."

Saadia also acknowledged that Francis has a bit of a "rock star" reputation, and his more liberal approach appeals to young people here in Israel as well as around the Christian world. "All in all, he's an awesome pope," he said.

Jerusalem is busily preparing for the pontiff's arrival by hanging more than 1,000 Israeli and Vatican flags on routes where the pope's motorcade will pass. Security is at the highest level in preparation for a head-of-state visit, and 8,000 Israeli police will be deployed throughout Jerusalem and the Old City.

"This is a top-level visit in terms of security and significance, both on political and religious level," said National Police Spokesperson Micky Rosenfeld.

The security forces have their work cut out for them. In the month and a half leading up to the pope's visit, there were a number of incidents of anti-religious graffiti spray-painted on mosques and churches in the greater Jerusalem area. These incidents, called "price tag attacks," are carried out by extremist Jews angry over what they perceive as pro-Arab policies. The vandalism is to show that the state must pay a "price" for these policies.

Rosenfeld said police are actively investigating two price tag incidents but have not made any arrests.

Dr. Gadi Gvaryahu, chairman of the anti-racism organization "Bright Tag," an umbrella group of 43 nonprofits formed in response to the price tag attacks, said he does not believe the pope's visit will change the attitude of the Jewish fanatics.

"The extremists want to change the political conflict to a religious conflict," he said. "They'll do everything they can to ruin the pope's visit."

Many Israelis are heartened by Francis' decision to travel with a Muslim and a Jewish leader from Argentina as a way to promote his message of interfaith dialogue. Rabbi Abraham Skorka, a biophysicist and former rector of the Latin American Rabbinical Seminary in Buenos Aires, and Sheik Omar Abboud, a former secretary-general of the Islamic Center of Argentina, will both be part of the official papal entourage.

Both men are close friends of Francis from his days as archbishop of Buenos Aires. A book that the pontiff co-wrote with Skorka, On Heaven and Earth, was recently translated into Hebrew so Israelis could read it ahead of the papal visit.

"In religion, there's a lot of influence, more than politicians," said Dabiya Yasser, a Muslim taxi driver and former police officer from East Jerusalem. "There are a lot of religious people here who would rather listen to a rabbi than [Israeli Prime Minister Benjamin] Netanyahu or an imam rather than [Palestinian President] Abu Mazen [Mahmoud Abbas]."

In Jerusalem's Old City, tourists from around the world streamed into the Church of the Holy Sepulcher as a number of Franciscan monks frantically worked on last-minute renovations in the chapel next to the Calvary, the Chapel of St. Mary of the Spasm, where John, Mary, and Mary of Magdalene stood and observed Jesus on the cross.

Fr. Sergio Galdi, secretary of the Franciscan Custody of the Holy Land, praised the pope's deep message of dialogue and reconciliation. "We are very excited and very happy because the pope comes here and confirms our faith and the faith of all of the people of this land," he said as he supervised the installation of new curtains in the chapel. "Jerusalem is the home of the three monotheistic religions, and the pope is bringing these friends [from Judaism and Islam]. It's a sign of reconciliation for our lives here in this land."

Galdi was also enthusiastic about Francis' meeting with Ecumenical Patriarch of Constantinople Bartholomew I, the spiritual leader of Orthodox Christians. Sunday's meeting between the two spiritual leaders will celebrate the 50th anniversary of the meeting between Pope Paul VI and Patriarch Athenagoras I in Jerusalem, which was the beginning of a process to reconcile the 1,000-year rift between Western and Eastern Christianity.

"It's a very important situation, also because in these 50 years we have made a lot of steps to encounter each other," Sergio said.

The pope's message of dialogue strikes a chord with Israelis, many of whom are exhausted by the constant tension of the political situation in the region. They don't expect the pope to solve any major problems, but they are glad he's making positive steps to draw attention to the issues.

"It's coming time that it's enough, all these problems between Jews and Christians, even Muslims," said Shaltiel, the contractor from Jerusalem who was also the victim of a terror attack eight years ago, when a mob attacked him as he drove through an Arab area in the West Bank. "I'm wearing a kippah on my head, but inside my head is an open mind."