Line between haves, have nots has disappeared 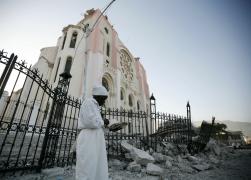 A Haitian woman outside the ruins of the Cathedral of Our Lady of the Assumption in Port-au-Prince, Haiti, Jan. 23. (CNS /Tomas Bravo, Reuters)

PORT AU PRINCE, Haiti -- In a chance encounter with a young Haitian who volunteered to drive filmmaker Gerry Straub around Port au Prince, conversation turned to the future of Haiti and what might be required for the country to rise from the ashes of the earthquake in a new way.

The young man, who came from a family of means, who had lived for a while in the United States and whose family owns a factory that employs about 750 people, began describing to Straub life before the earthquake. “He said before, there were people living in misery and who had no food and for whom every day was a struggle for food and survival and those who were wealthy,” Straub said. “After the earthquake, he told me, that line between those who have and those who don’t have has disappeared. Everyone is in the same boat, the struggle for food and everything else is really intense.”

The young man told Straub that he and some friends have been talking among themselves since the quake “about the notion of common good and the fact that the line between rich and poor had been erased,” said Straub. “He said that they understand the corruption within Haiti and what it has done to the country in the past. He told me ‘This is a time for Haiti to start all over and do it right. He and his friends are talking now, saying, ‘We have to do this right, we can’t do it the same old way.’” At the end of the tour of the city, Straub’s new acquaintance refused to take reimbursement for gas and for his time.

The factory owned by the young man’s family was not affected by the earthquake, and he said he hoped the facility, which manufactures chef’s coats and other types of uniforms for workers, would open again Jan. 25. In the meantime, he said, he has been busy trying to find food for his workers.

On Jan. 23, the banks in Haiti were opened for the first time, Straub said, and they were mobbed with long lines outside. The same situation occurred at Western Union outlets, he said, where people were finally receiving money from outside the country.

Straub observed that on the second and third day of his stay, while being driven around the city, he stopped several times to get out of the car and walked for several blocks, filming the devastation, the crowds, makeshift tent villages and never felt threatened. People, he said, might mob places where they think they can get food. However, he said, he didn’t see any violence, but he could sense the desperation.

The chance meeting occurred after Straub had traveled to a makeshift clinic in a private house in an area called Pacot, closer to the center of the city than the Haitian Community Hospital where he had been staying. The group was made up of Dr. Anna S. Pak of Dallas, a pediatrician; pediatric ER nurse Tiffany Cupp of Chicago; ICU and labor and delivery nurse Anne Marie Colby of Chicago and Paramedic Ronnie Gentry of Chandler, N.C.

The group attended to between 35 and 50 people who had minor injuries and illnesses or bandages that needed changing.

In the 90-minute tour of Port au Prince, Straub said the scene became worse block by block. A heavy stench of death hangs over many areas where collapsed buildings continue to entomb corpses. Rubble still blocks many streets. Straub said some areas that he was familiar with, particularly a park outside a hotel he had previously stayed at, had been turned into a temporary village with people in makeshift shelters. He filmed a soccer field where every square inch had been turned into a tent village.

He said that gruesome discoveries awaited in every block, highlighting the immensity of the destruction and the amount of work ahead just to clean up the human remains and the destroyed property.

Back at the Haitian Community Hospital, Straub was able to sit in on a meeting of medical personnel with a new figure who had arrived to administer the facility. Adding to the chaos of the quake was the fact that so many doctors and nurses from so many countries kept converging in a place where the need for emergency treatment was nonstop. The talk this day was about setting priorities and beginning to deal with the overload of patients who could be moved but were reluctant to leave the hospital because they were receiving care and, most important, food.

The hospital, said Straub, was also beginning to receive patients who did not have horrible injuries but are ill. Among them, the presumption goes, are people who previously would not have sought treatment but who know that medical attention is now available.

Earlier in the day, said Straub, a truck with food supplies arrived and began unloading goods in an area outside the hospital now crowded with patients and family members. He said a mob scene ensued, so the doctors later discussed new procedures and the need for more troops at the hospital for security purposes.

That evening he stood on a balcony overlooking an open area outside the hospital. In the dark he saw people continuing to carry others into what had become an open triage area. “The doctors are still working around the clock,” he said. “The need is relentless, and this is two weeks out. What I am trying to tell you is how widespread this is,” he said. “It is hard to take in.”

But he was also reminded the day before that life goes on. A baby was born at the hospital around four in the morning.

[Tom Roberts is NCR editor at large. Gerry Straub is a filmmaker, who in December was in Haiti working on a documentary titled "Angels of Compassion: the Luminous Force of Intentional Kindness." He returned to Haiti Jan. 21 for more filming. While there, he filed reports for NCR by phone.]

World | Line between haves, have nots has disappeared

Morocco continues occupation of Western Sahara, in defiance of UN