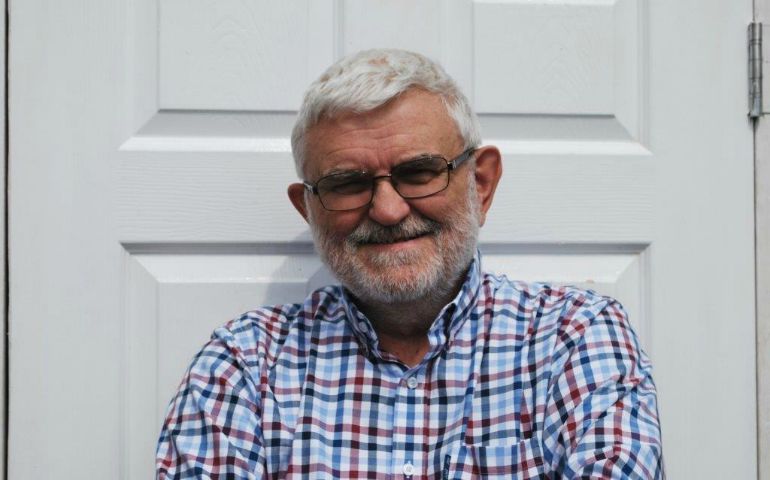 Chris McDonnell, secretary of the Movement for Married Clergy, says the current model of Catholic priesthood, where the priest does everything, is unsustainable. (NCR photo/Sarah Mac Donald)

The ordination of married men to the priesthood "needs to be explored openly within the church in England and Wales at national and diocesan levels," the retired bishop of Portsmouth, England, has said.

Speaking to NCR, Bishop Crispian Hollis said he was "increasingly aware" of the pressure which priests are under due to the shortage of priests. He believes the issue of ordaining married men should not be left to "conversations within parishes and among the lay faithful."

His comments were made as new figures released by the National Office for Vocations in England and Wales showed a drop in the number of men entering formation for the diocesan priesthood. Director of the office, Benedictine Fr. Christopher Jamison, described the fall as "disappointing."

The Movement for Married Clergy, a lay organization founded in 1975 to promote a married priesthood, recently called for a national assembly to discuss celibacy and the possible ordination of so-called "viri probati," or married men of proven faith. Backing the call, Hollis said it would not, in some senses, be a new departure for the church in Britain because "we already have a number of former Anglicans who are married and who have been ordained as Catholic priests."

But Hollis stressed that a commission should not be seen as an opening towards optional celibacy for Catholic priests.

"I am not campaigning to make celibacy optional. I want us to be able to ordain suitable married men, and that's a different question," he stated.

According to Hollis, if the church in England and Wales chooses to go down the route of ordaining married men, then a commission could establish the need and look at the best way in which it could be achieved.

"We can't go into this question blindly," he said. "There needs to be a responsible discussion within the church which is as broadly based as possible."

There is a ground swell in favor of this among the laity and diocesan priests, according to 80-year-old Hollis, who retired from Portsmouth in 2012. But he identified "quite of lot of resistance to the idea" among the bishops of England and Wales. "I don't go to the meetings of the bishops' conference as a retired bishop, but I don't think this question gets much air time in their discussions," he said.

One bishop who does attend episcopal meetings is Bishop John Arnold of Salford. Speaking to NCR, he said that while there are a number of priests of retirement age still in ministry and others approaching retirement in his diocese, "I do not think it is justified to claim that there is a 'shortage' of priests."

Describing himself as "cautiously optimistic about vocations to the priesthood," he also stressed that dioceses must ensure that priests are doing "that for which they have been ordained" and encouraging members of the parish community to take on administrative and ministerial tasks, which they had been "slow in doing after Vatican II."

Ultimately, Hollis knows the decision on whether or not to ordain married men rests with Pope Francis or his successors, as no national conference of bishops can make this decision without it being blessed by Rome. Francis, Hollis noted, has indicated an openness to the possibility of ordaining married men, but he believes the pope is "waiting for a compelling case to be put before him."

An April editorial published in U.K.-based newspaper Catholic Times, referred to Francis' interview with the German newspaper Die Zeit, in which the pope stressed that removing the celibacy rule was not the answer to the Catholic Church's priest shortage. But he did express an openness to studying whether viri probati could be ordained.

Referring to a letter to the Catholic Times from Chris McDonnell, secretary of the Movement for Married Clergy, calling for a commission on married priests, the editorial asked, "What has the Church got to lose by establishing such a commission? Or perhaps more importantly, the focus should concentrate on what the Church has to gain from such a move."

Hollis suggests it may be possible to recruit married men from the corpus of married deacons. Concerns over the cost of funding married priests, he believes, is "a false argument," as many viri probati would be men who have retired on pension from full-time secular employment and could therefore act as "non-stipendiary" priests, supporting themselves.

McDonnell is a retired teacher and a father and grandfather. He told NCR that introducing a non-stipendiary clergy is perfectly feasible. "My local Church of England vicar is a lecturer in law at Keele University, and he also runs a parish," he said.

The current model of Catholic priesthood, where the priest does everything, is unsustainable, McDonnell said. A non-stipendiary clergy would only be possible, he emphasized, if the priest is seen "primarily a eucharistic center of the parish" and responsible for the aspects of parish life where only a priest can function. The laity must fulfil other functions.

Cost, according to Hollis, is therefore not the stumbling block for viri probati, rather it is the unwillingness of senior members of the church to take the question seriously.

"We are constantly asked to pray for vocations, and the response is only a trickle," he said. "Maybe the Holy Spirit is saying to us that there are lots of priestly vocations around but they are married men — the viri probati — open your eyes!"

According to 59-year-old Liamy McNally, who was ordained for the Archdiocese of Tuam in Ireland in 1985, "There is no priest shortage!" For two years after ordination, he ministered on Inis Meáin, a tiny island off the west coast of Ireland. Then he fell in love and left public ministry but was not laicized. He now acts as executive secretary for the Association of Catholic Priests in Ireland.

"We have many priests, but they are married and so are not allowed to have a public ministry," he said.

McNally lives three miles from the picturesque town of Westport in County Mayo, which has a population of roughly 5,500. In this small area, he knows six married priests, only one of whom is in ministry — a former Columban missionary who married a nun. (Both became Anglicans.)

He told NCR that had celibacy been optional, he and many other priests would still be in ministry.

"I haven't left; I was never laicized; I am still a priest — but I am married. If you look at the Western church where vocations have declined, we haven't stopped praying for vocations," he said. "So is God not listening to us? Perhaps it is the episcopal church that is not listening to the Holy Spirit working through the people of God."

"They need two vocations — you cannot be a priest unless you take the rule of celibacy, even though you mightn't have a vocation to it," he said. A Protestant, he added, who becomes a minister and then is called to the Catholic priesthood doesn't have to be called to be celibacy.

McDonnell explained to NCR that Movement for Married Priests, which has 200 paid members but a far greater number of supporters, many of whom are fearful of publicly expressing that support, has written to the bishops in England and Wales on a number of occasions with little success.

"I strongly suspect that there is a moratorium on all the bishops working together on this issue," he said.

McDonnell stresses that members "are loyal members of the Catholic Church." Calling for courageous conversations, he is frustrated that they don't have any way of dialoguing with their bishops.

"We are not a dissident group; we are not in opposition to the church," he said. "The only thing we are asking for at this stage is discussion. That is why we are emphasizing the need to have a national commission. We have a small window of opportunity over the next 5 to 10 years where we could look at the problem as a joint group of bishops, priests and laity with a view to seeing what the issues are. But if we are not even willing to talk to each other about the issues — then we are heading for a brick wall. That worries us."

That the lack of priests is making itself felt in England and Wales cannot be denied. The Wrexham Diocese in North Wales is set to close a third of its parishes. Elsewhere, some dioceses are solving the problem by amalgamation.

"This seems to me a very unfair way of doing things; you have a man of 60 running a parish — in a normal job he would be thinking of approaching retirement — and then suddenly he is told to take on not one but two parishes and in some cases three," McDonnell said. "We are trying to hide the problem by having a physical entity which is called a parish but which is in fact three parishes."

He hopes that if the commission gets the go-ahead, it would be able to look not just at celibacy but also at the issue of what constitutes a parish.

He feels people are ready to accept a married clergy, having seen a number of Anglicans make the journey to Rome and bring their wives and children with them.

People, he said, can see the irony of a situation such as occurred in St. Thomas More parish in Coventry, which lost its priest, Fr. Philip Gay, after he served 25 years and left to marry. He was replaced by former Anglican vicar Fr. Stephen Day who is married with three children.

A version of this story appeared in the June 16-29, 2017 print issue under the headline: Calls to discuss married priests in UK.