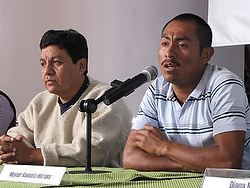 MEXICO CITY -- Mexican human rights groups and the migration ministry of the Mexican bishops' conference have expressed outrage at the attorney general's office for pursuing anonymous criminal complaints against a priest who provided material and spiritual support to a group of displaced Guatemalans.

The groups also took issue with Mexican immigration officials forcibly removing some of the Guatemalans, who had been residing in a camp they established in Tabasco state near the Mexico-Guatemala border since August after fleeing a violent displacement in their country.

Franciscan Fr. Tomas Gonzalez Castillo is accused of human trafficking for doing what his supporters say was nothing more than providing food and shelter to the displaced Guatemalans.

Gonzalez was in Mexico City Jan. 12 to meet with judicial officials. He told reporters his migrant shelter in the border town of Tenosique and a parish human rights center were the only organizations that offered support to the Guatemalans who "arrived with nothing more than the clothes on their backs."

Federal officials removed 72 Guatemalans from the camp during a predawn raid Jan. 9, saying their actions were done for "humanitarian" reasons and due to poor sanitary conditions at the camp.

A press release distributed by the Jesuit-run Miguel Agustin Pro Juarez Human Rights Center in Mexico City alleged federal agents lured children and then used them to take their parents away.

About 150 individuals escaped capture and remain in the area, while the rest are being housed a parish-run shelter in the Guatemalan border town of Tecun Uman, Gonzalez said. He also alleged that Mexican immigration officials reneged on a promise to process the camp residents and added that negotiations between officials from both Guatemalan and Mexican officials on repatriation were continuing.

The Guatemalans arrived Aug. 23 in Mexico, saying they were violently displaced by security forces from a farming settlement known as Nueva Esperanza. A report distributed by the human rights center said the settlement supposedly was built in violation of Guatemalan environmental laws. Gonzalez said that allegations of residents' involvement in the drug trade were made.

"There aren't conditions for returning," he said.

The allegations against Gonzalez continue a trend in which Catholic priests face charges of human rights violations against the very migrants they serve.