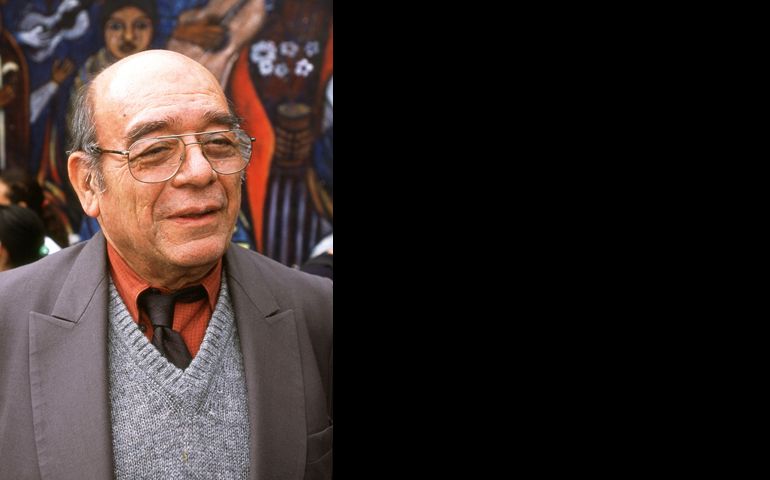 Bishop Samuel Ruiz Garcia is pictured in a 2006 photo. (CNS/Victor Aleman)
This article appears in the Francis in Mexico feature series. View the full series.

Inspired by the teachings of the Second Vatican Council and gatherings of the Latin American bishops in Medellin, Colombia, and Puebla, Mexico, he showed a preferred option for the poor, rubbed the rich the wrong way and ran afoul of the Vatican with his pastoral approach, especially with his ordination of married, indigenous deacons.

Francis will visit Chiapas Feb. 15 and celebrate Mass for indigenous peoples, including local Mayan languages in the celebration. He also will pray at the tomb of Ruiz, who died in 2011 at age 86, in the San Cristobal de Las Casas cathedral. It's seen as a show of respect for a churchman often at odds with the Catholic hierarchy, though a pioneer in a pastoral approach since adopted by the pope.

Francis "can't come to Mexico without visiting Our Lady of Guadalupe. He couldn't visit Chiapas without saluting the legacy of Samuel Ruiz," said Gaspar Morquecho, an anthropologist in San Cristobal de Las Casas. "We're talking easily of a half century of social ministry work and starting in the '60s, having a preferential option for the poor."

The trip to Chiapas -- part of a six-day visit to Mexico -- highlights the pope's preoccupation with indigenous issues and a population that has abandoned the church in large numbers across the Americas. While speaking in Bolivia last July, the pope apologized for the role of the church in the "so-called conquest of America" nearly 500 years ago.

His presence is expected to also bring attention again to the 1994 Zapatista uprising, when an indigenous-led rebel group demanded social, cultural and land rights. The indigenous issue in Mexico, where such populations are often impoverished and living in the most marginalized of municipalities, remains so sensitive in Mexico that local church officials said the Mexican government preferred that the pope visit elsewhere.

But for the pope to travel to Mexico and not San Cristobal de Las Casas would be unthinkable, especially since he reversed a ban the ordination of indigenous deacons imposed after Bishop Ruiz's retirement. Pope Francis also has approved liturgies in indigenous languages.

"[Bishop Ruiz] constantly had to defend himself to the Vatican and defend his work," said Michel Andraos, associate professor at the Chicago Theological Union and a frequent visitor to Chiapas. "He kept telling them, 'I'm Catholic. These are the texts of the Second Vatican Council, and I am following the teachings.'"

In late 1959, St. John XXIII elevated Ruiz to serve a mostly indigenous population, many of whom worked in exploitative conditions on coffee farms, received little if any education and did not speak Spanish.

Observers say Ruiz did not start off as a rebel, but rather took issue with the poverty of indigenous peoples in Chiapas. He became known as "Don Samuel," or, "Tata," "Father" in the Mayan languages. His diocese even included a ministry for care of "Madre Tierra," Mother Earth.

Discrimination ran deep in Chiapas, to the point indigenous people were prohibited from walking on the sidewalks of San Cristobal de Las Casas." The Mexican Revolution hardly reached Chiapas, leaving large landowners who formed the local elite and enjoyed close relations with the church hierarchy.

"Don Samuel broke with this dynamic [because] he discovered the reality of the poor and saw that the Gospel could bring about change," said Dominican Fr. Gonzalo Ituarte Verduzco.

The discord with the elites was a product of Ruiz's pastoral approach, which valued indigenous traditions, trained local leaders, spoke of social justice and put an emphasis on participation. Ituarte said it organized indigenous people in ways seen as threatening by landowners, some of whom branded the bishop a communist.

Ruiz learned indigenous languages and tirelessly traveled the diocese, which covers an often-inaccessible highland region, arriving with mules in remote Indian villages. He went on to develop an "autochthonous church," which would incorporate indigenous traditions and allow them to participate, at least partially, on their own terms.

"The system of domination had the indigenous only arriving at the church door. They were baptized, but nothing more. ... Don Samuel's idea is that the indigenous must enter the church, be an active part, with all of the rights," Ituarte said. "The church has been acculturated in various places, [and] we believe the indigenous of the Americas have the right that the church be theirs, too, drawing on their cultural and identity."

Ruiz trained hundreds of catechist instructors. Some of them went on to become permanent deacons, trained to serve areas without many priests. Priests say only men in the indigenous Mayan cultures can be considered authority figures, while their wives are automatically seen as authorities, too.

The issue of embracing an indigenous theology brought accusations of mixing Marxism with faith and implementing the concepts of liberation theology. The Vatican banned the ordination of indigenous deacons after Ruiz's retirement.

"All the presidential candidates stopped in to see him, some to greet him, but some to talk politics," Morquecho said.

In 1974, Ruiz organized a conference of indigenous peoples, the first grass-roots gathering of its kind since the arrival of Europeans in the Americas. Observers say it sparked indigenous awareness and ultimately led to the 1994 Zapatista uprising, in which the rebels took up arms against the government and used tactics of which Ruiz disapproved.

"People from his pastoral teams, catechist instructors, deacons and candidate-deacons were in the ranks" of the Zapatistas, although they gave up their church positions, Morquecho said.

"If it hadn't been for Don Samuel, there wouldn't be a Zapatista army," Ituarte said. "The diocese never proposed creating a people's army. ... But the increasing conscience in these communities made it possible that the Zapatista army emerged."

Ruiz became a mediator in the dispute, despite government misgivings.

"At one point they blamed him, but they quickly realized the only person that could mediate was Don Samuel," Ituarte said.

"The causes pushed by the Zapatista were the same ones we had been pushing for many years -- the campesino struggle, the indigenous struggle," though not armed conflict, Ituarte added.

The bishop's final years in Chiapas proved difficult. The 1996 San Andres Accords to address some of the Zapatista grievances were not fully respected, the Zapatistas alleged. The following year, paramilitaries massacred 45 members of a Catholic pacifist group known as Las Abejas [The Bees] during a prayer meeting, just three days before Christmas.

Ruiz retired in 2000 and left the diocese shortly thereafter. His coadjutor, Bishop Raul Vera Lopez, was sent to the northern city of Saltillo, a move some priests in the diocese say was a sign of discontent within the Mexican church hierarchy with the pastoral approach and church role in the Chiapas political situation. The number of Catholics leaving the church for other congregations also increased, leaving Chiapas with the lowest number of Catholics in the country.

The bishop's legacy still lingers, however. Ruiz's successor, Bishop Felipe Arizmendi Esquivel, has embraced a similar pastoral approach, something not seen in other Mexican dioceses after polemic leaders are replaced, observers say.

"The transformation in Mexico and its vision of the indigenous world has a lot to do with Don Samuel," he said. He left "a church that is alive with a people, who have rediscovered their dignity, values their identity and gives its support to those in the majority, the indigenous peoples."