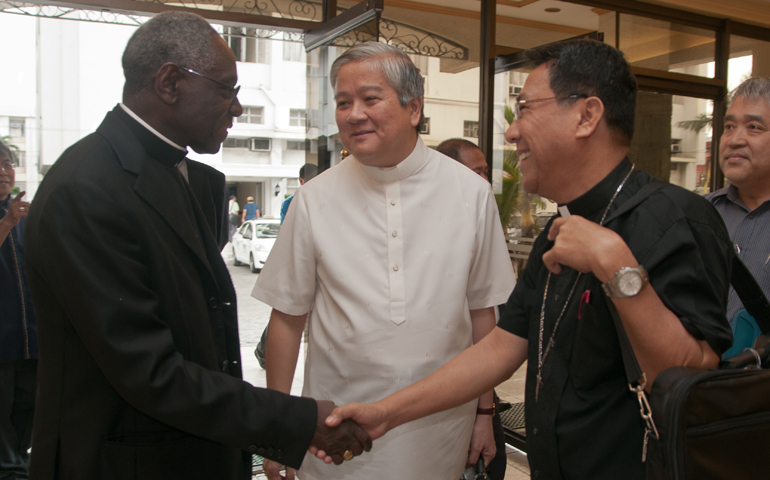 Steps taken by Pope Francis, including several pronouncements, are seen as a model for Catholics in the Philippines about what it means to be church leader and member. Surveys for the 2013 Catholic Directory of the Philippines recorded 76.18 million baptized Catholics amid the country's population of an estimated 96.71 million people.

"I think the big task of the (Catholic Bishops' Conference of the Philippines) would be to march with the same cadence as Pope Francis," said Archbishop Socrates Villegas of the Lingayen-Dagupan archdiocese. The 52-year-old bishop spoke with NCR days before he led his first plenary assembly Jan. 25-27 at Pope Pius XII Catholic Center as president of the bishops' conference.

He told NCR he approaches the role of president "with fear and trepidation, but also with faith" because he knows from experience, "God will always provide."

Though he served many years as private secretary to the late Cardinal Jaime Sin of Manila and served a term as CBCP vice president, he said he was most afraid of being "inexperienced" to lead a body of "so many independent-minded bishops." He was also concerned about the CBCP's "big responsibility in relation to society, government and business."

Francis had been pope for only a few months when Philippine bishops elected Villegas as conference president in July.

"I was not prepared for it. In my heart, I was complaining ... saying inside me, 'Let me enjoy my being baby bishop,' " Villegas said.

"Everybody was excited about the fresh air" the newly elected pope was bringing into the church, he said. "I think the worldwide Pope Francis fever is an advantage. At that time, he was already giving signals for how the church should be."

Among Francis' statements shortly after his election was his wish shared with journalists for the church to be "a church that is poor for the poor." He also repeatedly advised clergy and Catholics to be humble and charitable and even washed feet of a woman, a prisoner and a Muslim during the Holy Week ritual in Rome.

The smiley Villegas confided he "fully" agrees with what Pope Francis was saying and doing.
"I got excited with the statements and the leads he was giving, but I did not see myself as doing the leadership. I would have been happy as a spectator watching things develop," he said.

Despite bright economic forecasts for the Philippines, 28 percent of the people live in poverty, according to the 2013 report of the National Statistical Coordination Board.

Bishops gathered at the conference issued a pastoral exhortation, "To Bring Glad Tidings to the Poor," in which they declared poverty a "scandal" that all sectors perpetuate.

"We need to understand our role in it, our personal responsibility for it in our individual lives and shared cultures, and return to Jesus," the bishops wrote, echoing Francis' message of joy in evangelization in his Nov. 24 apostolic exhortation, Evangelii Gaudium.

They cited problems of corruption related to unconstitutional use of funds. Bishops called attention to inequality in society, noting that the richest 10 percent of the population is earning 10 times more than the poorest 10 percent. Jesus' call to love one another compels Christians to work for healing of all, their letter said.

They called church members to avoid encouraging and supporting an "economy of exclusion and inequality." This economy, they explained, pampers the wealthy but excludes others, especially the poor, from benefitting from regular jobs, liberating education, health care, decent and safe housing, and other basic services needed for a dignified life.

They also echoed Francis' call to shun idolatry of money.

One thing "challenging" for Villegas about Francis was "a lot of the things he was talking about required change." For the new CBCP president, it meant having to lead men set in their ways at a time when the pope was driving reform in the institution and society.

Villegas said he hopes that with humbler, more prayerful and charitable clergy, "the church can have better relations with the poor and the youth and can inspire thirsting Catholics so that they would not drink from other wells."

He cited the public debate and campaigns related to the passage of The Responsible Parenthood and Reproductive Health Act of 2012 as an example.

"Even if (proponents of the bill) were saying things that seemed to be contrary to church teaching, I always say we should never be lacking in charity," he said.

Debates "reached the point when the arguments were already becoming ugly, unpleasant and personal such that we were not using reason anymore. We were using our emotions," Villegas said.

He told NCR he stands by his declaration that contraception is corruption, which is the title given to the December 2012 pastoral letter of the CBCP explaining bishops' opposition to the reproductive health law.

Villegas expressed hope and "great excitement" over the tasks he faces after the assembly and the apparently increasing role Francis' exhortation affords national bishops' conferences.

Another area that can be left to the national bishops' conference, he said, is translation of liturgical books. He noted that the Second Vatican Council had already decreed this as the tasks for episcopal conferences, but it remained centralized in Rome. "The truth is, how does the Vatican understand the nuances of the Tagalog language?" Villegas asked.

He said he hopes the Vatican will also be "more open to national catechisms or regional catechisms so that the faith is transmitted in the context of the local culture."

Villegas emphasized that church renewal can happen with open dialogue and if all members walk together in the direction Francis has shown.

In the Philippines, "It's Year of the Laity, and our priorities this year include: reaching out to the poor, youth, the hurting, the marginalized, and Catholics who have left the church," Villegas told NCR.

CBCP has launched the Choose to be Brave website as the official portal for the youth to engage the church. It will be run by volunteers from Singles for Christ, Singles for Life and other groups.