With no resettlement plan, Haitian camps take on semi-permanent feel 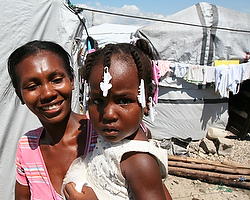 PORT-AU-PRINCE, Haiti -- With racquetball courts, a swimming pool and the country's only golf course -- nine holes on a steep hillside -- the Petionville Club shares one of Port-au-Prince's most exclusive neighborhoods with business moguls and ambassadors.

After the Jan. 12 earthquake, the club became home to some 50,000 people whose houses in neighborhoods downhill were damaged or destroyed by the magnitude 7 earthquake that killed as many as 300,000 people and left 1.5 million homeless.

The Petionville camp looks like a small city, with broad, winding paths descending past row after row of white or blue-and-orange tents. Outside the tents, men chat in clusters and women wash babies or braid their children's hair. Small groups of blue-helmeted U.N. peacekeepers stroll among the tents in response to news reports of increased crime or to avert violence as the Nov. 28 elections approach.

Outside a tent on the main path, Louisiane Meme sits beside a makeshift stand displaying bread rolls and peanut butter. Business is slow.

"People don't have any money," she said.

As months pass with no clear plan for resettling displaced Haitians, the approximately 1,300 tent camps scattered around Port-au-Prince and surrounding communities have taken on a semi-permanent feel, with vendors selling food and toiletries, barber shops and beauty salons, and kiosks offering household supplies and cell-phone recharging services.

The camps mirror life in less-damaged neighborhoods, where street vendors clog sidewalks, hawking everything from charcoal to blue jeans. Most Haitians are employed in the informal economy, and the earthquake victims have transplanted that to the camps.

Even more crowded than the shantytowns where many of their residents used to live, the camps have raised fears of rampant contagion if the cholera outbreak that started in mid-October north of the capital spreads to Port-au-Prince. By Nov. 1, the Ministry of Health reported more than 4,700 cases and at least 330 deaths in the country.

Most of the camps are relatively small, set up close to the inhabitants' damaged homes. The Petionville camp and Champs de Mars, in a park across the street from the ruined presidential palace, are home to more than 50,000 people.

Both have some measure of fame. Petionville, where Catholic Relief Services, the U.S. bishops' overseas relief and development agency, operates a cash-for-work program, is operated by a relief organization headed by Hollywood star Sean Penn. Champs de Mars has received more government attention, possibly because of its location.

"There hasn't been a strategic, all-inclusive approach to the disaster," CRS country director Scott Campbell told Catholic News Service. "It has been somewhat based on political reasons. You can't approach a disaster of this complexity and magnitude camp by camp. It has to be an overall strategy, and that's what's lacking."

Under the relentless Caribbean sun, a tent crammed with six or eight people becomes unbearably stifling. The camps also are vulnerable to wind -- several people died in a freak windstorm in late September -- and rain. During tropical downpours tarpaulins leak and the ground under the tents becomes soggy.

Petionville camp managers moved people out of flood-prone areas, and CRS pays camp residents, who work on a rotating schedule, to dig drainage ditches and shore up retaining walls with sandbags.

In some smaller camps, tents are becoming interspersed with wooden shacks. The longer a comprehensive resettlement plan is delayed, the more likely the camps are to become tomorrow's shantytowns.

The camps themselves are a mixed blessing. While people needed immediate refuge after the earthquake, Campbell said, "having people in camps was always the last option."

Although most residents say they would rather be in their own homes, the aid agencies managing the camps have installed water taps, showers and latrines -- amenities lacking in the shantytowns where many camp dwellers lived before the earthquake. The food assistance, work programs and free health care offered in larger camps run by aid agencies are also attractive.

As a result, while some people move out of the camps, others move in, said Fabienn Agenna, who manages the CRS work program in the Petionville camp. She said it is impossible to tell how many have arrived; camp staff members only notice that formerly empty areas of the camp suddenly sprout tents again.

One complaint she hears from camp residents is that aid agencies have stopped providing food assistance.

"People want food distribution," she said, "but what they really want is the opportunity to work."

Campbell said that means rebuilding community life in the people's original neighborhoods, so they can be assured of both a home and a livelihood.

"People do not want to be in the camps," he said. "They will put a foothold in there because of the access to clean water, sufficient water and health care."

There is a "delicate balance between magnetizing people into Port-au-Prince and into camps, because that is where the services are, and getting them back home, which is where services need to be (to) draw them back to those places," Campbell said. "All the businesses that sprang up in the camp can just as easily spring up in the communities, so let's accelerate the process."

In a tree-shaded clearing amid the tents, surrounded by clotheslines hung with paintings and silk-screened T-shirts, Yves Georges Claude Fils painstakingly paints a wooden plank. With a cell phone and a Bible in his lap, he forms the words, "God will guard you from all evil." The board, which he hopes to sell, is part of a roulette-style game popular in Haiti.

His wife, Marie-Michelle Similien, sits beside a tree, painting a silhouette on a colorful background, while three other painters work at canvases propped against chairs or their knees. They call themselves the "Art Club," and they have an eye on visitors to the camp, hoping for a sale.

"I hope to leave," painter Rodson Derus said. "I hope we can move people out of here. I would like to have a job. I would like for the country to wake up."

Christians in northern Iraq find themselves in flux

Five reasons Christians should stay in the Middle East