Nuclear nations meet at UN amid growing support for disarmament 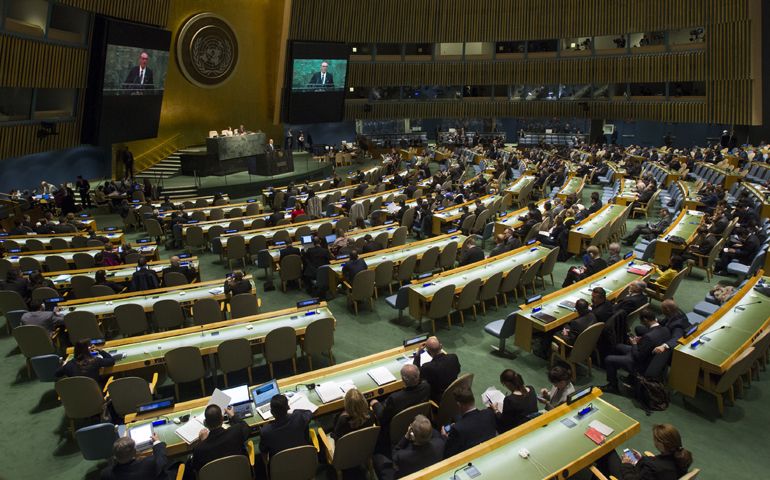 This is the first of a two-part series.

As world leaders at the United Nations attempt to negotiate a pathway to further nuclear disarmament, it is reasonable to ask: With nuclear powers holding to their arsenals as a means to deterrence and with nuclear technology spreading, is global disarmament still possible?

By most reports, the mood at the monthlong U.N. Nuclear Non-Proliferation Treaty talks being held in New York is somber. Few expect breakthroughs, and without a breakthrough, serious disarmament is in doubt.

Some background: Seventy-five years ago this August, the United States dropped atomic bombs on the Japanese cities of Hiroshima and Nagasaki. Death toll estimates vary, from 100,000 to more than double that number. Those bombings remain the only use of nuclear weapons in warfare.

Twenty-five years later, in 1970, amid a costly nuclear arms race between the superpowers and with the nuclear genie spreading, world leaders called into effect the Nuclear Non-Proliferation Treaty (NPT). It consisted of what became known as a "grand bargain." The then five nuclear powers -- Britain, China, France, Russia and the United States -- agreed to reduce and eventually rid themselves of nuclear weapons in exchange for agreements with non-nuclear nations that they would give up their nuclear ambitions.

The treaty called for treaty assessments every five years. The 2015 conference is the ninth such treaty appraisal.

Twenty-five years after the signing of the treaty, in 1995, it was extended indefinitely. As of February 2015, a total of 190 nations are treaty signatories, representing the largest global number of nations to any disarmament agreement. One signatory, North Korea, acceded to the treaty in 1985 but never came into compliance and withdrew in 2003. India, Israel, Pakistan and South Sudan never joined. India and Pakistan have tested nuclear weapons; Israel is widely believed to possess them.

At the height of the Cold War, the Soviet Union and United States jointly possessed more than 60,000 strategic nuclear weapons, the vast majority of the global stockpile. According to the Federation of American Scientists, Russia and the U.S. today are holding on to an estimated 14,700 nuclear weapons (deployed, nondeployed and stockpiled), with the other nuclear powers holding another 1,000 or so.

Disarmament optimists cite these cuts and the fact that nuclear weapons have not been used in war for nearly 70 years as signs the non-proliferation treaty is doing its job. Pessimists argue that nuclear nations are clinging to outdated deterrence ideas and are racing to modernize their arsenals, weakening moral pleas to non-nuclear nations to resist building such weapons.

Going into this year's treaty assessment meeting, the spirits of anti-nuclear-proliferation activists were lifted by last month's announcement that Iran had tentatively agreed to restrictions in its nuclear ambitions. At the same time, a pervasive pessimism seemed to have settled on many.

For its part, Washington plans to spend $1 trillion over the next three decades to modernize its nuclear arsenal. Russia is also involved in modernization efforts.

Additionally, five years ago, there was talk at the NPT review conference of setting up a nuclear-free zone in the Middle East. That proposal now has been shelved, in large part because of recent Middle East turmoil.

While nuclear nation leaders remain visibly wedded to nuclear arsenals, popular repulsion for these weapons has grown. For example, on April 27, the day before the U.N. conference opened, a coalition of anti-war, justice, environmental and interfaith groups delivered 8 million petition signatures to U.N. officials, calling for swifter disarmament action.

The immorality of maintaining these systems of deterrence, each based on terror, was palpable in an April 30 statement issued by more than 50 interfaith groups to Algerian Ambassador Taous Feroukhi, president of the review conference. It read, in part:

Nuclear weapons are incompatible with the values upheld by our respective faith traditions -- the right of people to live in security and dignity; the commands of conscience and justice; the duty to protect the vulnerable and to exercise the stewardship that will safeguard the planet for future generations. Nuclear weapons manifest a total disregard for all these values and commitments. There is no countervailing imperative -- whether of national security, stability in international power relations, or the difficulty of overcoming political inertia -- that justifies their continued existence, much less their use.

We raise our voices in the name of sanity and the shared values of humanity. We reject the immorality of holding whole populations hostage, threatened with a cruel and miserable death. We urge the world's political leaders to muster the courage needed to break the deepening spirals of mistrust that undermine the viability of human societies and threaten our shared future.

Echoing these pleas, U.N. Secretary-General Ban Ki-moon opened the conference urging negotiators to work harder to move to "nuclear zero" while warning that trends now are moving away from "zero."

The primary global nuclear actors remain the United States and Russia. Their latest bilateral arms reduction agreement, as an extension of the Strategic Arms Limitation Talks agreement, occurred in July 2009, when U.S. President Barack Obama and then Russian President Dmitry Medvedev agreed to limit deployed U.S. and Russian strategic nuclear warheads to 1,550 for each side by 2017, representing more modest cuts than had been expected. The U.S. currently has 1,780 deployed strategic warheads and Russia 1,900, according to the Federation of American Scientists.

He added: "As long as these weapons exist, the United States will maintain a safe, secure and effective arsenal to deter any adversary."

Some analysts concluded that Obama seemed to be taking back with his left hand what his right hand had offered in the name of peace. In other words, while his words spoke boldly of a world without nuclear weapons, it provided a framework and rationale for continuing U.S deterrence policy, a rationale that underlies the current three-decade-long U.S. modernization program.

Adding to current complexities, bilateral relations between the U.S. and Russia have soured in the wake of Russian belligerence in the Crimean peninsula and U.S. plans to establish a new missile defense system in Europe.

Next: While the Vatican grows increasingly insistent in condemning nuclear weapons, the U.S. bishops' position on the deterrence question is uncertain. Read Part 2.