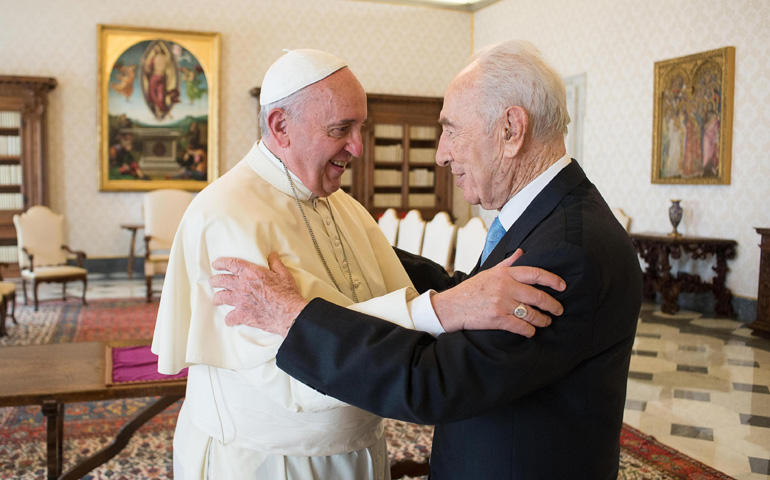 "In the past, most wars were motivated by the idea of nationhood. Today, however, wars are incited above all using religion as an excuse," Peres told the Catholic magazine Famiglia Cristiana ahead of the papal meeting Thursday.

Jesuit Fr. Federico Lombardi, Vatican spokesman, confirmed that Peres, who ended his presidential term in July, had requested the meeting and told the pope about his idea.

The pope, however, did not commit himself to the proposal.

"The pope listened" to the idea just as he always does with any peace initiative, "showing his interest, his attention and encouragement," Lombardi said.

But "the pope made no personal commitment" and reminded Peres that the Vatican has the Pontifical Councils for Interreligious Dialogue and for Justice and Peace -- two offices "that are suitable" for supporting or following such initiatives, Lombardi said.

Pope Francis also met later in the day with Jordan's Prince El Hassan bin Talal, who, for the past four decades, has worked to promote interfaith understanding and dialogue around the world.

Lombardi said during the 30-minute meeting, the prince talked about the latest activities and "pressing issues" of the various initiatives supported by his Royal Institute for Inter-Faith Studies.

Lombardi said the pope's meeting with Peres lasted an unusually long 45 minutes, reflecting the pope's "esteem and appreciation" for Peres, whom he earlier praised as a "man of peace."

The main focus of their talk was Peres' idea for a "United Religions" organization and did not touch on current "political issues in any depth" the Vatican spokesman said.

In an exclusive interview with Famiglia Cristiana, the 91-year-old former two-term prime minister of Israel said he wanted to establish an international body representing the world's major religions, as a moral force able to intervene in conflicts.

Peres said Pope Francis would be the best person to head such a world body because "perhaps for the first time in history, the Holy Father is a leader who's respected, not just by a lot of people, but also by different religions and their representatives."

"In fact, perhaps he is the only leader who is truly respected" in the world, said Peres, who was jointly awarded the Nobel Peace prize in 1994 with Palestine Liberation Organization Chairman Yasser Arafat and Israeli Premier Yitzak Rabin.

Peres said the United Nations and its peacekeepers "do not have the force or the effectiveness of any one of the pope's homilies, which can draw half a million people just in St. Peter's Square alone."

"So given that the United Nations has run its course, what we need is an organization of United Religions," Peres said, as "the best way to counteract these terrorists who kill in the name of their faith."

"What we need is an unquestionable moral authority who says out loud, 'No. God doesn't want this and doesn't allow it,'" he said.

Prayer is also an important part of peacemaking, he said; people should not underestimate "the power of the human spirit."

"We must not become cynical. The human being is much more than being made up of just flesh and blood," he said.