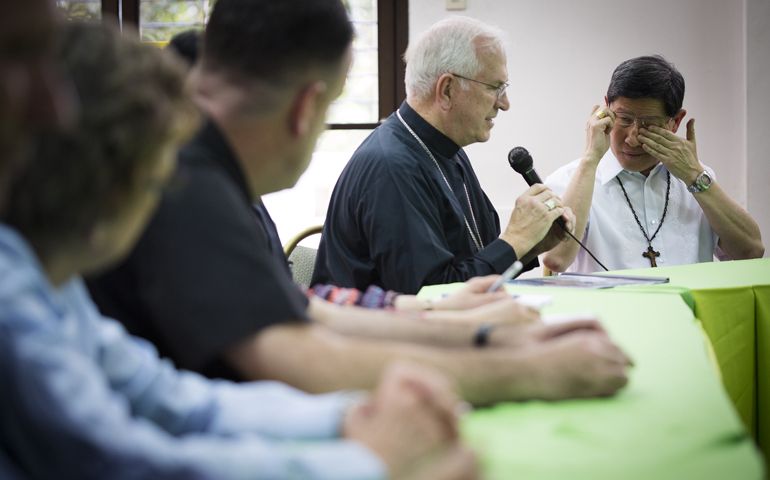 Manila, Philippines — An emotional Cardinal Luis Tagle of Manila welcomed U.S. Catholic leaders reviewing Typhoon Haiyan recovery efforts, saying that the work to rebuild devastated communities can show the world a church united in the service of people in need.

With tears welling up as he described the utter destruction he saw during a visit to Tacloban soon after the Nov. 8 typhoon swept in from the sea with 195-mile-an-hour winds and a tsunami-like storm surge, Tagle reminded the international delegation on Monday that storm survivors can teach visitors about the importance of perseverance and maintaining faith in God.

"I don't know how we could make the whole world realize how much we could help. For a few days (during my visit) we knew it was possible for humankind to be together, to be one, to feel for one another and to transcend the barriers, all the baggage, the history that religion, that politics, the financial economy has imposed on everyone," Tagle said in a meeting at the offices of the Catholic Bishops' Conference of the Philippines.

"In that regard we saw the response and demand here," he told a delegation of more than a dozen representatives of the U.S. Conference of Catholic Bishops, Catholic Relief Services and Caritas Australia. "There is so much hope for the world. We just prayed that this will be sustained and will not become sporadic, only occasional. We hope it becomes a lifestyle to be spearheaded by Christians."

Archbishop Joseph Kurtz of Louisville, Ky., USCCB president, who was leading the delegation on its weeklong visit to the Philippines, told the cardinal that the U.S. church wanted to work side-by-side with Filipinos in the long recovery process.

"We know there is one church and we want to be partners with you," he said.

U.S. parishes still are collecting funds, most of which have been designated for humanitarian needs. USCCB officials project that about $9 million will be raised in parish special collections for the recovery effort.

Meanwhile, CRS has raised about $48 million, including $28 million from private donors and $20 million from public sources, reported Joe Curry, the agency's country representative in the Philippines. All of the funds are being used for humanitarian needs, he told CNS.

Tagle acknowledged that recovery and rebuilding is likely to take years because the devastation was so great, reaching across 12 dioceses in the central part of the country with the Palo archdiocese and Borongon diocese experiencing the most serious damage. In some locales, 90 percent of buildings and homes -- more than 550,000 in all -- were smashed into matchsticks.

As of Jan. 29, more than 6,200 people had died and more than 28,600 were injured in the storm while nearly 1,800 remained missing, according to the Philippines' National Disaster Risk Reduction and Management Council. More than 4 million people were displaced by the storm.

Damage was set at $877 million by the council.

Two tropical storms swamped parts of the same regions in January, forcing some who lost their homes in November and were living in tents to flee to higher ground again.

Tagle said natural disasters are the norm for the island nation and that he has come to see how important local parishes have become in offering shelter and becoming centers for sanitation and hygiene, the distribution of food and support for displaced people.

"At least for me," he told the delegation, "it has become a special lesson, because in moments like these a place of worship also becomes a place of charity. The place is made sacred not by sacraments and prayer but by the belief that we can find a refuge here. It is our home."

Compounding the challenges, the cardinal added, is the trauma experienced by priests, women religious and lay leaders at parishes, who are struggling with their own losses of family, possessions and secure housing.

"The church structure is in a state of shock," Tagle said. "We have been offering emotional and psychological first aid."

CRS' Curry explained during the 45-minute meeting that agency staff members are attempting to develop creative responses to the disaster because the devastation is so severe. With a shortage of construction supplies and tools and a lack of capacity on the part of local and national governments to remove debris and improve infrastructure, the agency is attempting to find enough clear land to build temporary wooden shelters so people can move from tents into more secure housing, he said.

Carolyn Woo, CRS president, pledged to help the Philippines "build back better," using an oft-repeated phrase cited in the effort to rebuild Haiti after its 2010 earthquake.

"This is a chance where we can imagine what is needed and how to rebuild so that, the next storm, people are not as strongly affected," she said.

In a later meeting with two Philippine bishops, the delegation was asked to consider rebuilding churches, village chapels, schools, convents and rectories in line with the effort undertaken by the USCCB and other Catholic agencies in Haiti.

Archbishop Socrates Villegas of Lingayen-Dagupan, president of the Philippine bishops' conference, said the time has come to build churches that will serve not just for worship but as community centers and shelters when a natural disaster occurs.

He said the need to rebuild schools is great. He feared that students from poor families will not be able to continue their education for quite some time.

"The rich students have moved to out to either Manila or Cebu," the archbishop explained to the delegation.

Auxiliary Bishop Broderick Pabillo of Manila, chairman of Caritas Philippines, sought support so that the Philippine church and society overall can better respond when disaster strikes.

The delegation also visited Archbishop Giuseppe Pinto, papal nuncio to the Philippines. The archbishop expressed his appreciation for the recovery efforts of the church agencies and offered Vatican support for their work.

"They really are brave people," he said of the people in the central Philippines who are trying to piece their lives back together. "They say, 'The typhoon has been strong, but our faith is stronger.'"