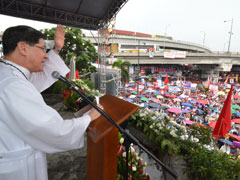 Thousands listen to Archbishop Luis Antonio Tagle in the rain at the Mary Queen of Peace Shrine in Quezon City, the Philippines, during a prayer rally against a proposed reproductive health bill. (Noli Yamsuan)

QUEZON CITY, Philippines -- On a voice vote, the Philippines House of Representatives Aug. 6 ended debate on a reproductive health bill that has been hotly contested in the chamber and strongly opposed by the country's Catholic hierarchy since it was introduced in March 2011.

The vote followed a weekend of prayer vigils and rallies organized by the Catholic church that drew tens of thousands to oppose House Bill 4244, titled Act Providing for a Comprehensive Policy on Responsible Parenthood, Reproductive Health, and Population and Development.

Ending debate on the bill will allow it to move forward for a house floor vote. Had the bill's opponents prevailed, prolonged debate would have shelved the bill when the current Congress adjourns next year.

The bill is a key provision in President Benigno Aquino III's antipoverty policy, but has been fiercely opposed by the country's influential Catholic bishops.

The Philippines' birth rate has been among the highest in Southeast Asia, according to the United Nations Economic and Social Commission for Asia and the Pacific. The country's population growth averaged 1.7 percent from 2005 to 2010, according to the commission.

Catholic leaders have opposed the bill because church teaching allows only natural family planning methods, and they say sex education should be from parents to children.

Opponents reject the bill's approach of controlling population to solve poverty. Church officials also say the reproductive health bill will pave the way for legalizing abortion in the country. According to its advocates, the bill does not support or allow abortion.

Aquino's Liberal Party and its allies caucused early on Aug. 6 and decided to vote to end debate after the president urged party members and allies to vote their consciences, Zambales Rep. Mitos Magsaysay said during the legislative session, which was broadcast over national television.

The Catholic church organized "Prayer Power" rallies against the reproductive health bill across the country the weekend of Aug. 4-5. Tens of thousands joined the rallies in the archdioceses of Manila, Cebu and Lingayen-Dagupan.

In a message to youth at the rally in Lingayen-Dagupan, Archbishop Socrates Villegas said, "Contraception is corruption. The use of government and taxpayers' money to give out contraceptive pills is corruption."

He urged the youth to resist a "culture of contraception" that "looks at babies as reasons for poverty."

He apologized to children and youth for confusion caused by debate on the bill, and for the affront dealt them by labeling them as burdens and the cause of poverty.

Villegas' message was read at the Manila rally by Henrietta de Villa, former Philippines ambassador to the Vatican.

"To the poor our message [is]: You can count on us to uphold and defend your dignity and your culture of perseverance, striving, solidarity and value for your children, that culture," Tagle said in Tagalog.

He also assured women, "The church is with you against violence experienced by women," and enjoined men in the crowd to respect and love their wives. "She is your wealth," Tagle said.

Addressing legislators and government leaders he said, "What do the poor need? We know it. Let's not pretend we don't know. Education, work, opportunity, solidarity, compassion, proper administration, right use of resources -- we all know that. Why don't we do it to respond to needs of the poor?"

The Commission on Family and Life of the Philippines bishops' conference organized the rally with various bishops' commissions, agencies, Catholic schools, and charismatic and pro-life groups.

"This is a moral issue and therefore this event will not be a political rally but a prayer rally focused on praying for the non-passage of the [bill]," said Bishop Gabriel Reyes of Antipolo, chairman of the family and life commission.

Edu, who asked his last name not be used, of Pinoy Plus Association, an organization of people living with AIDS, told NCR the vote was a positive development for women's health and for stopping the spread of disease.

Eric Manalang, president of Pro-life Philippines, called Aquino's intervention and his allies' rush to vote "acts of aggression." He compared Aquino to a "puppet" of foreign powers, such as the United Nations and the United States, which he said support the bill.

He said Catholic groups would continue prayer vigils at the House of Representatives and around the country for the rest of the process. The Philippines Senate is amending their version of the law, he noted.

However, Carmelite Fr. Marlon Lacal, executive secretary of the Association of Major Religious Superiors of the Philippines, told NCR that his experience with Aquino showed him the president has his own mind.

Lacal said the Prayer Power rallies demonstrated the force of the church. "Imagine, despite rain thousands came." (Manila and other parts of the country have been saturated with unusually heavy monsoon rains. Half of metropolitan Manila was flooded by the evening of Aug. 6 with waist- or neck-deep waters.)

"It shows the church's unity when it comes to denouncing the moral dimension, and also the political dimension of the issue. I wish the church would exert as much force with other urgent moral issues, such as Freedom of Information Bill or anti-torture law," Lacal said.

Responding to critics who have called the bishops "bullies" for standing against the bill, Lacal said, "The church will always engage institutions in society. There may be things that cannot be compromised on the side of the church, but more often than not, the church must always engage with society. The church cannot say it will turn its back at one instance that the state has failed to listen to its voice. This fight against ending Congressional debate on [the bill] has not been wasted effort."

In marches around Philippines, Catholics protest threats to life

The early stages of the Cuban revolution: a retrospective