Skip to main content
News
This story appears in the Francis in Poland feature series. View the full series. 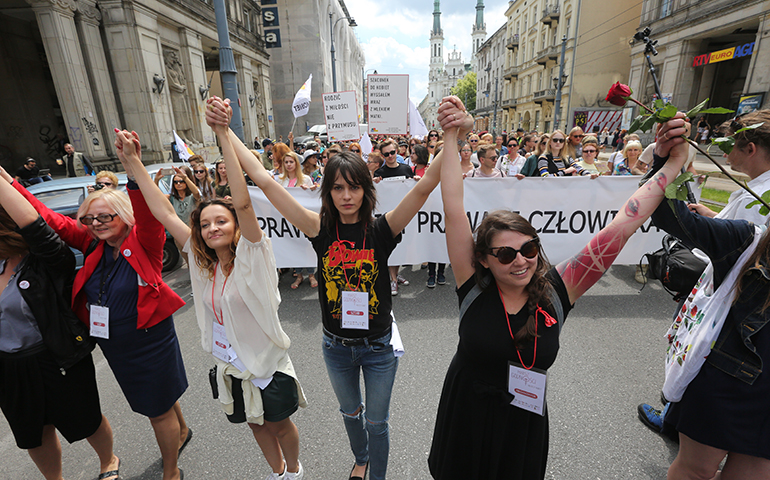 Thousands of Polish women marched to the city center on June 18, a warm and sunny day in Warsaw. Holding up coat hangers, the symbol of a primitive and deadly method of self-induced abortion, they were protesting the prospect of a total ban on abortion.

"Torture of women will not be accepted," the banners read. "Stop trying to restrict abortion law, if you do not, you will see what women's anger really means."

Poland already has one of the most restrictive abortion laws in Europe. Enacted in 1993 under pressure from the Polish Catholic church, the current law permits abortion only when the life of the mother is at risk, when there's serious damage to the fetus, or in cases of rape. Prior to the 1989 fall of communism in Poland, abortion was unrestricted.

The growing protests are directed against a proposal that would eliminate the current exceptions that allow for abortion and instead make all abortion illegal. The proposed law, which is supported by Poland's Catholic church, would criminalize both the woman having the abortion and the doctor performing it. Both would face five-year jail terms.

The proposed law would also extend to miscarriages. A woman who has a miscarriage could face a jail term of up to three years if it cannot be proven that she did not induce the miscarriage. She would be charged with "fetal murder," Elzbieta Korolczuk, a professor of gender studies at Warsaw University, told NCR in a telephone interview.

Korolczuk warned that the proposed law threatens women's lives. She said that doctors would be afraid to perform any kind of surgical intervention that might inadvertently terminate a pregnancy.

Korolczuk cited a recent case where doctors refused to treat a woman patient because they believed she wanted to terminate her pregnancy. In fact, the woman was not pregnant, but sick with a serious and fatal intestinal inflammation.

Despite the vehement protests against the proposed ban on all abortion, data collected by CBOS, one of Poland's most respected polling firms, shows that over time, the Polish population has increasingly opposed abortion. In 1993, when the current law was enacted, more than 60 percent of Poles believed abortion should be readily available, with 30 percent opposing ready availability. Today, only 45 percent believe it should be readily available, with 50 percent opposed to such availability.

Korolczuk attributed these findings to obligatory Catholic classes in the public schools and media reporting of abortion as child murder.

An ultraconservative Catholic organization known as "Stop Abortion" is collecting the 100,000 signatures required to submit the proposed abortion ban to the Polish Parliament. According to Krystyna Kacpura, director of the Federation for Women and Family Planning, they will easily obtain the signatures, which are being collected after Mass in churches throughout Poland.

"The church is pushing Poland back to the Middle Ages," she said.

Magdalena Korzekwa-Kaliszuk, a member of the advisory body of the Polish episcopate*, offered a counter argument. Advocates for abortion rights, she said, don't have the moral authority to decide who is to be born.

Korzekwa-Kaliszuk, referring to 971 abortions performed in 2015, said that 721 of these were performed because Down syndrome was detected in the fetus.

"We are in the 21st century, and it is time to stop this form of discrimination against people who are not perfect," she said.

Korzekwa-Kaliszuk claims that women who have abortions suffer for many years after the procedure, including rape victims. "Rape victims who had abortions said it was the worst possible solution. It was like being raped again," she said.

Dominican Fr. Pawel Guzynski, who is preparing for his doctorate in the city of Lodz, gave a more nuanced church view in an email response to NCR. "The church in Poland is quantitatively dominated by women," he said, "so insensitivity, especially on the part of the hierarchy, to women's fate may turn out to be a source of serious problems for the church."

On April 3, in perhaps a portend of these problems, women walked out of churches throughout Poland when Catholic leaders read a statement during Sunday services in favor of the total ban on abortion.

Even under the current law, many doctors opt out of performing abortions by signing a statement of conscience.

Polish women, therefore, go to Germany, Slovakia and the Netherlands to have abortions, said Kacpura. She estimates that 100,000 Polish women have abortions abroad each year. There is no official data.

Less affluent women are often forced to have babies they can't afford.

"This perpetuates the economic discrimination against women who can't afford to have babies and are forced to have them," said Marta Usiekniewicz, a doctoral student at Warsaw University.

The abortion controversy has made democratic debate difficult because opposing sides can't agree on language.

"When I walk into my central subway station, I hear this message on the loudspeaker," Gosia Nowicka, a translator, told NCR in a telephone interview. "Stop women from killing babies. Show your support for this new bill, and it will be passed."

Nowicka pointed out that it's a baby, not a fetus, or an embryo, for someone who follows the teachings of the church, which means that the person who has an abortion is killing a person.

"There's no room for dialogue," she said. "This situation is my worst nightmare."

*This story has been updated to clarify language about Magdalena Korzekwa-Kaliszuk's work with the Polish bishops.

A version of this story appeared in the July 15-28, 2016 print issue under the headline: Poland debates proposal to ban all abortion.