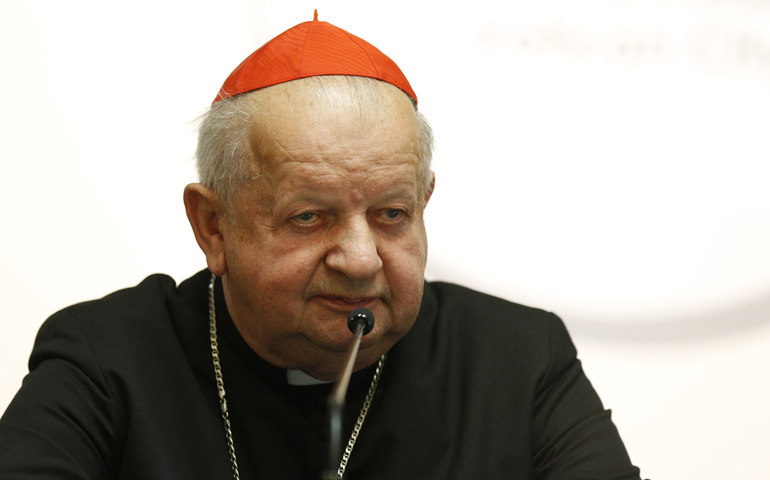 When a group of Polish Catholics declared support for a gay rights campaign, their involvement was quickly condemned by the country's bishops conference. Having raised the issue in the church, however, the group is determined to press on and ensure the atmosphere of understanding engendered by Pope Francis finds a louder echo in Poland.

"The bishops' reaction is only a first step -- what matters is that they've now felt it necessary to take up a position on LGBT issues," explained Dominika Kozlowska, editor of the Catholic monthly Znak (The Sign). "The Catholics who've engaged in this campaign will also continue to talk about these issues in publications and discussions. Though the bishops have accused us of infringing Gospel injunctions, they've also said things in the process which haven't been said in the church here before."

The campaign, "Let's exchange a sign of peace," was launched in early September with nationwide billboards depicting clasped hands -- one with a rainbow bracelet and the other with a Catholic rosary.

Organizers include Poland's Campaign Against Homophobia and a Christian group, Faith and Rainbow, which ran a network of "LGBT pilgrim havens" during the church's summer World Youth Day in Krakow.

They've outlined plans for public meetings around the country with LGBT activists and prominent Catholics, and vowed to remind Poland's mostly Catholic population of what the church officially teaches -- that Christian values "include the necessity of respect, openness and willing dialogue with all people, including homosexuals, bisexuals and transsexuals."

Several Catholic magazines and newspapers pitched in with expressions of support on the campaign's website, znakpokoju.com, including Wiez (The Link) in Warsaw, and Znak and Tygodnik Powszechny (Universal Weekly) in Krakow.

In a Sept. 8 statement published in the Polish Catholic information agency, KAI, Krakow's archbishop, Cardinal Stanislaw Dziwisz, accused the campaign's Catholic backers of selectively quoting the pope and "falsifying the church's unchangeable teaching," by promoting "not just respect for homosexual people, but a view of homosexual acts and same-sex unions as something morally good."

From Warsaw, Cardinal Kazimierz Nycz also hit out at the campaign's supporters in a Sept. 10 statement with KAI. Encouraging "respect and goodwill for homosexuals" was fine by Catholic teaching, Nycz said. But some Catholics were "criticizing church teaching on how to evaluate homosexuality," and even "suggesting a need to modify or change it."

On Sept. 14, the whole Bishops' Conference presidium pitched in, attacking Wiez, Znak and Tygodnik Powszechny by name, and rejecting claims that the Polish church was homophobic. Although LGBT groups often accused the church of violating their dignity, the bishops said, the church was in reality "the only institution which, for two thousand years, has untiringly proclaimed the dignity of all without exception."

"But if extending hands to others means accepting the person, it never means approving their sin," the communique continued. "Members of a community gathered in the liturgy have a permanent duty to be converted, and meet Gospel demands by turning away from their sinful fancies. We fear this action, extracting the extended hand gesture from its liturgical context, assumes a meaning incompatible with the teaching of Christ and the church."

Gay and lesbian groups have frequently complained of discrimination in Poland, where the predominant Catholic church opposed clauses in a 1997 constitution barring discrimination on grounds of ''sexual orientation" and has rejected repeated requests for a pastoral service for homosexuals.

In 2010, the European Union criticized church-owned schools and colleges for refusing to employ declared homosexual staffers, while in January 2013, the church thanked Polish members of parliament for voting down a bill to allow same-sex civil partnerships.

In December 2013, the bishops attacked the "ideology of gender" in a pastoral letter, warning it was "deeply destructive" to "all social life" and calling on Poles to resist it. A year later, church leaders attacked state broadcasting directors for allowing TV channels to run a half-minute program defending gays and lesbians.

Related: Polish bishops vow to resist change at synod on the family (June 12, 2015)

And in October 2015, the Polish church's vigorous stance was forcefully presented at Rome's Synod of Bishops, when its chief representative, Archbishop Stanislaw Gadecki of Poznan, condemned "feelings of false compassion" and rejected any rethink on homosexuality.

Surveys suggests more and more Polish Catholics are questioning their church's teachings on issues like this, while the widening gap between church teaching and public opinion appears to be exacerbating feelings of rejection and alienation.

In one recent questionnaire on Poland's Queer.pl website, only 21 percent of gays and lesbians claimed to be "faithful and practicing" Christians, less than a third of the national average, while 47 percent said they were no longer Catholics and further 30 percent described themselves as "believers who avoid the Catholic church."

Hopes have been aroused in Poland, not surprisingly, by the pope's conciliatory statements on homosexuality, including his March 2016 apostolic exhortation Amoris Laetitia, and his statement on a June flight from Armenia that the church "must say it's sorry to the gay person it has offended."

Related: Francis: Christians must apologize to gay people for marginalizing them

In July, before Francis arrived in Krakow for World Youth Day, a group of parents with LGBT children wrote to the pontiff, begging him to speak out against the "hatred" directed at their families. Given the Polish church's strong influence on public opinion, they asked, why were priests not defending LGBT citizens in their homilies, and speaking out against "attacks of verbal and physical violence."

"We are moved by fear about the fate and future of our children -- a fear justified by the homophobia which is very widespread in our society," the group told the pope. "LGBT people are excluded from the church, although many believe in God and wish to practice and nurture their faith. Holy Masses and meditations for homosexuals are conducted secretly and in hiding, and few priests have any feeling for them. ... Why is the church watching with such indifference?"

Kozlowska, the Catholic editor, thinks the pope's "good example" could hold the key. Social and cultural attitudes are changing in Poland, as in other countries, she says, with more citizens now living in "irregular situations."

Having refused to recognize homosexuality as a genuine orientation, and seen it only as something sinful, Poland's Catholic bishops now have to consider the subject more carefully.

"The institutional church must start offering adequate pastoral support for this part of our society, rather than just treating these issues ideologically," the Znak editor told NCR. "I think Francis is offering a way out of the deadlock, by proposing new ways of thinking, acting and speaking, and giving a new quality to church reflections. This is something quite new for Poland, and conservatives and progressives here should all learn from it."

Yet the battle looks set to continue, as the pope's teachings are struggled over and rival Catholic groups vie other to influence the church's agenda.

When the Polish bishops' communique was published Sept. 15, Kozlowska and her Catholic editor colleagues from other publications defended their move in a statement of their own and welcomed the bishops' affirmation "with Pope Francis, that every person must be respected, whatever their sexual orientation."

They had acted "in full accord with the Magisterium," they insisted, in "engaging in church activity to ensure appropriate pastoral care for LGBT people" -- and they had no intention of "asserting political, legal or doctrinal demands."

"Our involvement as media patrons of this campaign was aimed solely at stressing those elements of church teaching which are little known and disseminated in Poland," the Catholic editors wrote. "Polish Catholics have now received a clear call from their pastors to treat homosexual brothers and sisters with dignity and respect. If our involvement in this campaign was improperly understood, perhaps this was a felix culpa, or fortunate mistake."

Yet in their statement, the bishops conference warned that homosexual acts must continue to be viewed as "objective moral evils," and cautioned Catholics not to play any part in a campaign whose postulates "clearly depart from the Gospel" and could "damage society and individuals."

Nycz has said he's planning to talk with the editors to clarify his "justified doubts," while KAI has accused them of helping "promote homosexual attitudes."

Some conservative church groups are circulating a petition, demanding that Wiez, Znak and Tygodnik Powszechny, all founded in the post-War communist years, are stripped of their "Catholic" titles.

Despite the furor, Kozlowska is hopeful.

Although LGBT issues have long been talked about by Poland's media, she says, the church itself has rarely touched the subject. And when it has done, it's invariably been in "very strong language," insisting family life and all social relations must be governed by natural law.

Even while condemning the latest campaign, the bishops will have raised LGBT issues to a new level and been forced to confront them more credibly and effectively.

"No one us wants to start an open struggle with the bishops, interfere with their teaching or make a public declaration of doctrinal opposition," she told NCR. "But we hope the bishops' communique and our subsequent statement won't be the last act in this area. The voice of lay Catholics is weak in Poland and the habits of submission are strong. But things are clearly evolving, so we should be optimistic."

[Jonathan Luxmoore's two-volume study of communist-era martyrs, The God of the Gulag, is published by Gracewing in the UK.]