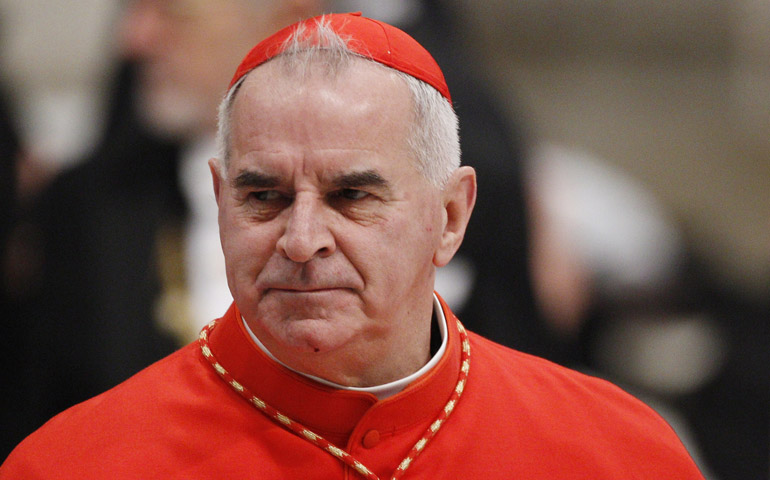 Pope Francis accepted Scotland Cardinal Keith O'Brien's decision to renounce all "duties and privileges" associated with being a cardinal.

The former archbishop of St. Andrews and Edinburgh, who resigned in 2013 after admitting to sexual misconduct, will no longer exercise the role of a cardinal, including by serving as a papal adviser, a member of Vatican congregations and councils, and as an elector of a new pope, the Vatican press office said.

A written statement from the College of Cardinals, published Friday, said, "The Holy Father has accepted the resignation of the rights and privileges of a cardinal expressed in canons 349, 353 and 356 of the Code of Canon Law, presented by his eminence Cardinal Keith Michael Patrick O'Brien, archbishop emeritus of St. Andrews and Edinburgh, after a long period of prayer."

Passionist Fr. Ciro Benedettini, a Vatican spokesman, told journalists the resignation was "not a punishment resulting from a process" or any formal proceedings against the cardinal, but rather it came from the cardinal himself after a long period of prayer and reflection "in dialogue with the Holy Father."

While he will no longer be invited to attend consistories and other gatherings of cardinals, including an eventual conclave for the election of a new pope, Benedettini said, he retains his faculties as a priest and retired bishop.

The College of Cardinals' statement also said Pope Francis expressed his pastoral concern for all Catholics in Scotland and encouraged "them to continue with hope the path of renewal and reconciliation," the Vatican statement said.

In his own statement, released through the Scottish bishops' conference, O'Brien again apologized "to the Catholic Church and the people of Scotland."

"There have been times that my sexual conduct has fallen below the standards expected of me. For that I am deeply sorry," said his statement released Friday.

The cardinal stepped down as archbishop in February 2013 after the Observer, a British weekly national newspaper, carried a story detailing complaints of three priests and one former priest who alleged O'Brien had made sexual advances toward them.

The cardinal initially denied the allegations but, less than a week later, he issued a public apology for his actions. He did not attend the March conclave that elected Pope Francis because, he had said, he did not want media attention to be on him rather than on the process of electing a new pope.

Following a request from Pope Francis, the Vatican's Congregation for Bishops appointed in April 2014 then-Auxiliary Bishop Charles Scicluna of Malta to go to Scotland to collect testimony for a formal investigation against O'Brien.

The Vatican statement did not mention the visit or its eventual outcome.

In a separate statement, the Catholic church in Scotland welcomed news of the cardinal removing himself from the key duties associated with the office of cardinal, calling it "an unprecedented action."

"Cardinal O'Brien will also be reduced to a strictly private life with no further participation in any public, religious or civil events," it said.

In the same statement, Archbishop Leo Cushley of St. Andrews and Edinburgh said he was confident that the pope's decision was "fair, equitable and proportionate."

He said the cardinal's behavior had "distressed many, demoralized faithful Catholics and made the church less credible to those who are not Catholic."

Cushley expressed his own feelings of "sorrow and regret to those most distressed by the actions of my predecessor. I also pay tribute to those who had the courage to come forward to speak to Archbishop Scicluna. I hope now that all of us affected by this sad and regrettable episode will embrace a spirit of forgiveness, the only spirit that can heal any bitterness and hurt that still remains."

O'Brien, who was born in Ireland, currently lives near the Scottish border in Northumberland County in northeast England in a home purchased by the archdiocese.

According to an earlier archdiocesan statement, the decision to buy the property for the cardinal was made by the archdiocese's trustees in accordance with their duty to provide for elderly and retired clergy. It said the property belongs to the church and any future sale of the house would be returned to archdiocesan accounts.