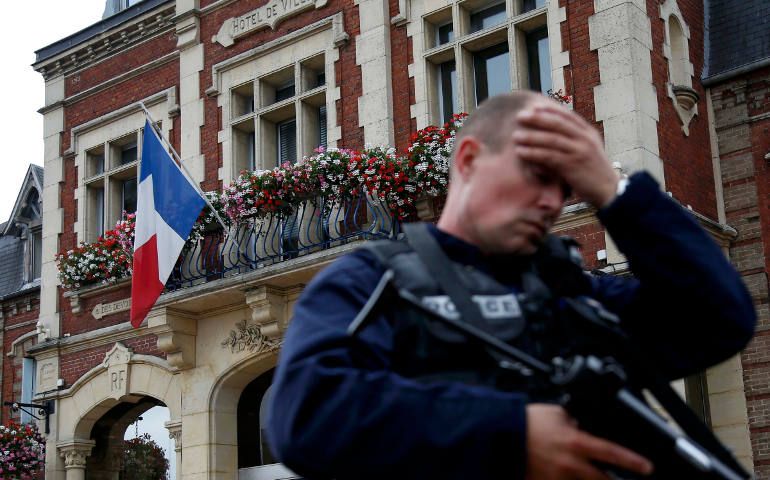 A policeman reacts as he secures a position in front of city hall after two assailants killed 84-year-old Fr. Jacques Hamel and took five people hostage during a weekday morning Mass at the church in Saint-Etienne-du-Rouvray, France, near Rouen July 26. (CNS photo/Pascal Rossignol/Reuters)

France was convulsed by another horrific attack on Tuesday morning as armed men burst into a Catholic church near Rouen and slit the throat of a priest who was celebrating Mass.

The slain priest, Fr. Jacques Hamel, 84, was one of four people taken hostage by the attackers, who authorities said had claimed to be from Daesh, the Arabic term for the Islamic State group.

One of the other hostages was reportedly in critical condition and both assailants were reportedly killed by security forces.

French President Francois Hollande said ISIS was behind the attack in northern France, and Prime Minister Manuel Valls called it “a barbaric attack on a church.”

“The whole of France and all Catholics are wounded. We will stand together," he added.

Archbishop Dominique Lebrun of Rouen, who was in Krakow, Poland, with World Youth Day pilgrims when the attacked occurred, confirmed the priest’s death. He said he would return to his archdiocese, Catholic News Service reported.

"I cry out to God, with all men of good will. And I invite all non-believers to unite with this cry. The Catholic Church can take up no weapons other than those of prayer and brotherhood among people of good will," the archbishop said in a statement from Krakow. He said that while he would leave Poland, hundreds of young people from his diocese would remain. "I ask them not to give in to violence," but instead "become apostles of the civilization of love."

The attack took place at the parish church in the town of Saint-Etienne-du-Rouvray, in Normandy.

It was the latest in a string of deadly terrorist attacks in Europe in the past couple of weeks, including the Bastille Day attack in the French city of Nice and killings in several places in Germany.

The imam of the mosque in Saint-Etienne-du-Rouvray said he was “appalled by the death of my friend,” according to the French newspaper, Le Figaro.

“He gave his life for others,” the imam, Mohammed Karabila, was quoted as saying. “We are shocked here at the mosque.”

At the Vatican, Pope Francis' spokesman Jesuit Fr. Federico Lombardi issued a statement saying the pontiff has been informed "and participates in the pain and horror of this absurd violence, with the most radical condemnation of all forms of hatred and prayer for those affected."

"We are particularly affected because this horrific violence took place in a church, a sacred place where the love of God is proclaimed, with the barbaric killing of a priest and the involvement of the faithful," the statement read.

The conservative Guinean prelate, Cardinal Robert Sarah, said he was praying for the victims and for France and asked in a tweet: "How many more dead before European governments understand the situation in which the West finds itself? How many more decapitated heads?"

“The Archdiocese of Chicago stands with the people of #Rouen, France; we offer our prayers for healing and peace in this time of great sorrow.”

The Archdiocese of Chicago stands with the people of #Rouen, France; we offer our prayers for healing and peace in this time of great sorrow

Cardinal Vincent Nichols, head of the Catholic Bishops Conference in the U.K. and Wales, joined Muslim leaders in a joint statement condemning the attack.

“We are deeply saddened and shocked by the brutal murder. To commit murder at a place where people gather in peace to worship adds another layer of depravity to the violence that we have witnessed over the past weeks.

“We pray for the courage to respond to all evil with truth, justice, and reconciliation.”

The Italian Bishops’ Conference said the attack had provoked “upset and concern” but urged people not to give in to “closure or revenge,” while an Italian regional political leader, Roberto Maroni, described the murdered priest as a “martyr of faith” and urged the pope to proclaim him a saint as soon as possible.

The Islamic State group issued a statement saying the church attack was carried out by two 'soldiers' from the group, which has claimed responsibility for inspiring a number of brutal terror attacks in France and elsewhere in Europe.

If ISIS were behind the attack, it would signal a new phase in the battle against the terrorist group since they have not targeted Christian sites in Europe.

The Vatican has long been on a state of high alert for threats against Francis, who leaves Rome Wednesday for a five-day trip to a Catholic youth festival in Poland. And Christians in the Middle East have increasingly been subject to vicious attacks by Islamic radicals.

At the Vatican, Lombardi issued a statement in the pontiff's name saying that Francis is "particularly shocked because this horrible violence took place in a church, in which God’s love is announced, with the barbarous killing of a priest and the involvement of the faithful."

Hamel, the elderly priest who was killed, was an auxiliary priest was filling in for the regular parish priest, who had just left on vacation, The New York Times reported.

He was ordained in 1958 and had celebrated his golden jubilee in 2008, according to the diocesan website.

The titular parish priest, Fr. Auguste Moanda-Phuati, told the French broadcaster RTL that Hamel had refused to retire at age 75, as the church allows, because of the shortage of Catholic clergy in France.

“He was a courageous priest at his age. He still felt strong,” said Moanda-Phuati, who, according to French press reports, is Congolese.

On social media, there was an oupouring of support with the hashtag #JeSuisCatholique and #JeSuisPrete ( I am Catholic, I am priest) in several languages.

[Reporting from Catholic News Service was included in this story.]