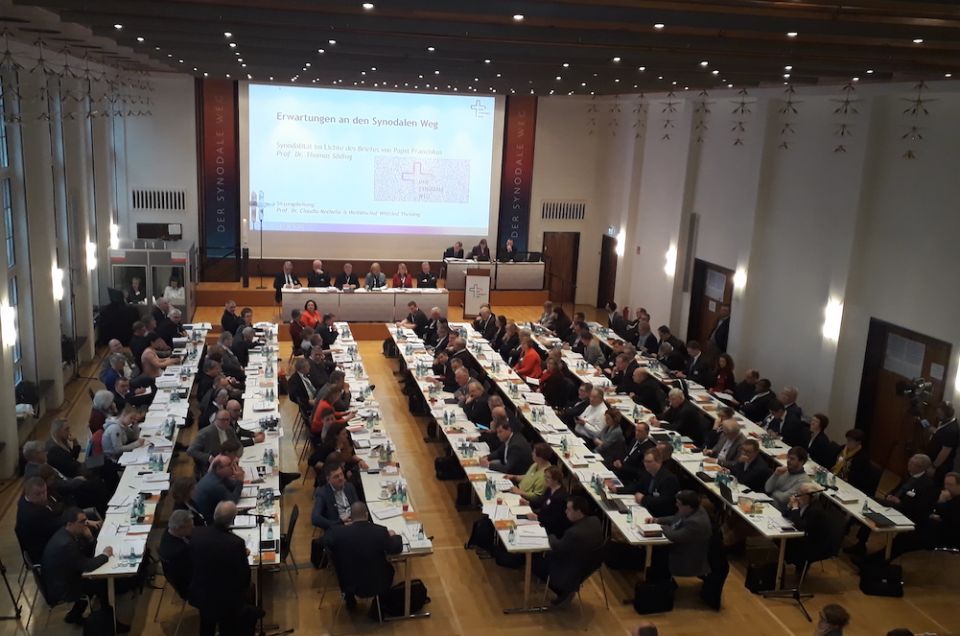 German bishops and other Catholic leaders gather for the first working session of the synodal way in Frankfurt inside the "Dominkanerkloster," a former Dominican monastery now used by the Protestant church. They gathered there because St. Bartholomew's Imperial Cathedral is undergoing conservation work. (Philipp Gessler)

Kramp-Karrenbauer, 57, often known as "AKK" in German media, a member of the governing Christian Democratic Union (CDU), told journalists on Feb. 3 that she wished there were many more women in church leadership, beginning with their serving as deacons.

"And I am for the abolition of celibacy. It would help to make more people enthusiastic to serve the church," she said, adding that the decision to live without a family poses too great an obstacle for those wanting to dedicate their lives to the church.

Kramp-Karrenbauer's fellow CDU member, Heribert Hirte, said in a telephone interview that AKK entered a political minefield when she called for an end to celibacy in the priesthood. He said the church opposes such political intervention into its internal affairs. Still, he praised Kramp-Karrenbauer for her courage in making a public statement.

Hirte, a Catholic, said that women are getting increasingly impatient as they wait for the church to give them a greater role. And an increasing number of Germans, he said, don't care at all about religion.

According to its latest annual report, since 1990, the Catholic Church in Germany has lost an average of 100,000 registered members annually. More than 216,000 left in 2018. There are 23 million Catholics in Germany out of a population of about 82 million. The rest of the population is predominantly Protestant.

Kramp-Karrenbauer's views support those of church liberals who believe major changes are urgently needed to stop the hemorrhaging of members.

A historic meeting between church leaders and the laity, called a synodal way or path, concluded in Frankfurt Feb. 1. Organized by the German bishops' conference and the Central Committee of German Catholics, it was designed to avoid the laws and rules that apply to more formalized church synods or councils. The intention was to start something new and less constrained.

The original impetus for the dialogue was concern about a massive sexual abuse scandal documented in a 2018 report, which had come under immediate attack from conservatives like the bishop of Regensburg, Rudolf Voderholzer, who charged that the study was unscientific and unprofessional.

"It was an aggressive challenge to the accuracy of the sexual abuse study, and an attempt to destroy the Frankfurt meeting," said Philipp Gessler, a Berlin resident who was formerly a religion editor at Deutschlandfunk, German public radio. Gessler is the author of three books on religion. 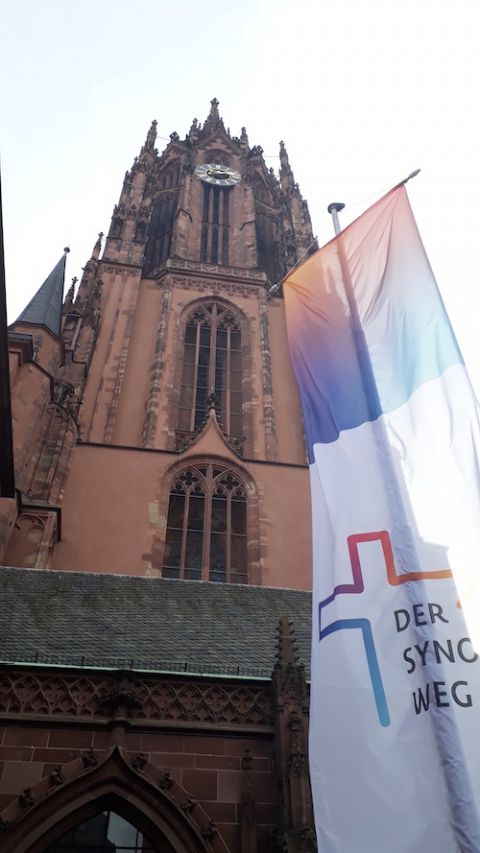 Religion writer Matthias Drobrinski reported on the severity of the sexual abuse problem in Süddeutsche Zeitung, one of Germany's leading newspapers.

His story included an account of a young transsexual man who spoke in Frankfurt before an audience of 230 people and told of the sexual abuse he'd suffered from a priest. There was a brief silence after the young man spoke. Then the audience rose and gave him a standing ovation.

According to Drobrinski, rarely has a German church forum encouraged such open dialogue.

He describes some of the many calls for reform voiced during the gathering. Theology professor Eberhard Tiefensee called the life crisis of many priests "a festering wound." Bishop Franz-Josef Bode of Osnabrück argued that priests should be able to decide whether or not to lead a celibate life. Bishop Georg Bätzing of Limburg favored a change in Catholic sex education. Archbishop Stefan Hesse of Hamburg said the church must give more answers on homosexuality and treat homosexuals with respect.

Conservative church leaders, on the other hand, warned against such pursuit of change. Led by Voderholzer and Cardinal Rainer Maria Woelki of Cologne, they argued that the sexual abuse scandal should not be allowed to lead to an end of celibacy and the ordination of women priests.

Woelki mocked the assembly as a kind of Protestant parliament. Cardinal Reinhard Marx, archbishop of Munich and Freising, chastised Woelki for using "Protestant" in an anti-ecumenical way. Marx is chair of the bishops' conference.

Cardinal Walter Brandmüller called those who advocate for women priests heretics, saying they should be excommunicated.

According to Gessler, conservative clerics were repeatedly outvoted by 80% to 90% when they tried to change the rules governing the talks. "It showed them how little power they have when they are confronted by representatives of all Catholics, not just the ones that think the way they do," he said.

Participants in the meetings of the synodal way showed awareness that these meetings may be the last chance the German church has to regain its credibility, said Gessler, noting that decades of sexual abuse of children has shattered its image.

The prognosis for continuing the dialogue is good. Bode described the synodal way as a great future workshop of the church in which conversations can take place across generations.

Synodal talks will resume in September and conclude at the end of 2021.

It's not over: Your thoughts on our open letter to bishops