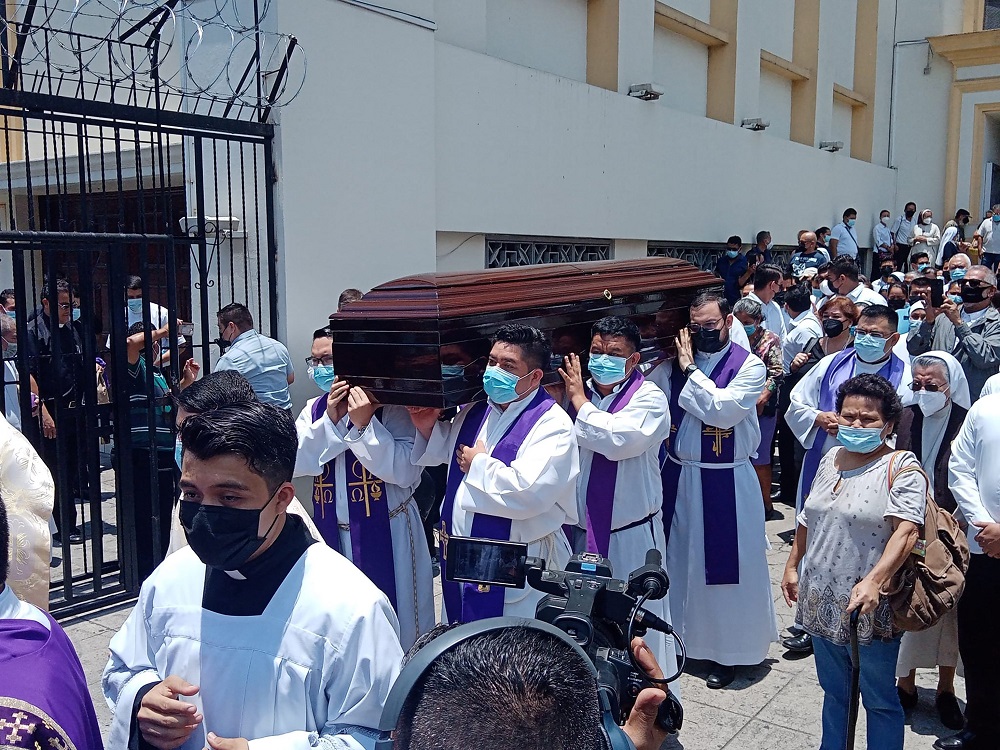 Priests carry the coffin of Archbishop Fernando Saenz Lacalle to the crypt of the cathedral of San Salvador, El Salvador, May 2. Archbishop Saenz, a Spaniard who was head of the Archdiocese of San Salvador from 1995 to 2008, died April 28 in El Salvador at age 89 from complications related to Alzheimer's disease. (CNS photo/courtesy Roberto Rivas)

Retired Archbishop Fernando Saenz Lacalle was laid to rest May 2 in the crypt of the Metropolitan Cathedral of San Salvador, El Salvador, close to the resting place of St. Óscar Romero, whom he befriended and advised.

Saenz, a Spaniard, died April 28 in El Salvador at age 89 from complications related to Alzheimer's disease.

"A little-known phase is that when Óscar Romero was Father Romero, a priest, and Saenz Lacalle was a priest, they met and became friends," said Cardinal Gregorio Rosa Chávez, auxiliary bishop of San Salvador, in an April 29 video for the archdiocesan Televisión Católica.

The late archbishop became someone to whom St. Romero looked for advice and consulted when he was discerning whether to accept the post as archbishop of San Salvador in 1977, said Rosa Chávez, adding that Saenz's name appears on several occasions in the Salvadoran saint's diary.

Rosa Chávez said  Saenz was known for being a man of great Marian devotion. He made it known that the Virgin Mary "guided his footsteps as priest and bishop," including during difficult times, which were many during his term as archbishop, 1995-2008.

Human rights groups and others criticized Saenz for opposing the reopening of an investigation looking into the 1989 killings of six Jesuits, their housekeeper and her daughter, and for vehemently defending a former Salvadoran president whom many have accused of authorizing the killings.  Saenz also supported requests for a pardon for two soldiers convicted of killing and raping three U.S. nuns and a lay worker in El Salvador in 1980.

"Let's show mercy and pity. They (the convicted soldiers) have shown repentance, and that's the correct conduct," Saenz, once a chaplain of the Salvadoran military forces, told reporters in 2000.

Though he said he was adhering to a spirit of forgiveness called for in the amnesty laws that helped bring about the end of the country's 12-year civil war, many argued that forgiveness could not be reached without justice.

Some criticized the archbishop for his decision to steer formation in the country's main seminary toward Opus Dei, of which he was a member.

After being named archbishop of San Salvador by then-Pope John Paul II in 1995, he said that "the homily is a commentary on the Gospel ... and not a political denunciation," adding that "a bishop doesn't speak of politics, he speaks of religion. I am not thinking of talking about politics."

Some wondered whether he was referring to Romero or to his predecessor, Archbishop Arturo Rivera Damas, who followed the Salvadoran saint's legacy in using his homily to defend the poor and vulnerable. However, Rosa Chavez said, Saenz supported the sainthood cause for Romero and was one of the last people to see him alive, hours before he was martyred March 24, 1980.

Many Salvadorans lined up at the cathedral of San Salvador to pay their respects before he was buried in the crypt of the cathedral, where some of the archdiocese's other bishops are buried.

"What's left as his material legacy is the construction of the metropolitan cathedral and, during his time, Radio Paz and TVCA (the archdiocesan radio and TV stations) were born," said Rosa Chávez, who remembered him as "a tranquil man, serene, friendly but also very shy."

In a message sent by Cardinal Pietro Parolin, Vatican secretary of state, Pope Francis sent the archdiocese his condolences along with an apostolic blessing in "the Christian hope of our risen Lord."

Escobar Alas said that, "moved by faith and hope, we can only imagine Fernando Saenz when he arrived in heaven" and was welcomed by fellow bishops and friends, including St. Romero.

"They welcomed him and now it's up to us, beloved, to continue the mission," he said.