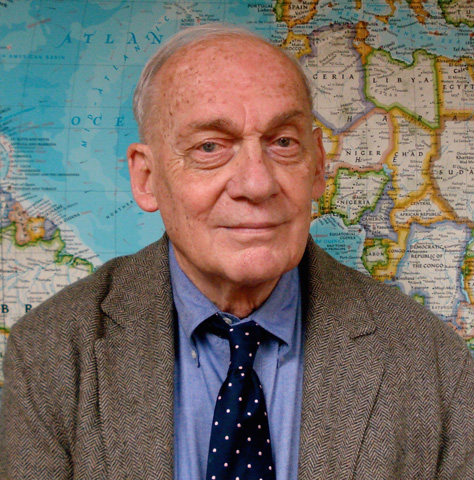 Ursuline Sr. Dorothy Kazel and lay missionary Jean Donovan dined with U.S. Ambassador Robert White and his wife in San Salvador, El Salvador, on Dec. 1, 1980, and stayed overnight as their guests at the embassy. The next day, the churchwomen drove to the international airport to pick up Maryknoll Srs. Ita Ford and Maura Clarke. On their return to the capital, National Guard soldiers stopped the four women on the lonely airport road.

On Dec. 4, White stood above a shallow pit where the bodies of the women, raped and murdered, were being exhumed. Photos of the moment show Ambassador Bob, as he was called, in a rumpled white shirt, staring into the grave, hands on his hips, looking at once devastated and defiant. News accounts quote his words: "The bastards won't get away with it."

White sent cable after cable to Washington, describing the alliance of terrorism among Salvadoran authorities, its business elite and the military. A centrist, White argued for a negotiated -- not military -- solution to the civil war beginning to ravage the country.

Instead, the Reagan administration that came into office in 1981 ratcheted up support for the Salvadoran government. Secretary of State Alexander Haig Jr. fired White. Over the next 10 years, 75,000 Salvadorans died, most of them unarmed noncombatants at the hands of the military and death squads.

White died of cancer Jan. 13, 2015, at a hospice in Arlington, Va., at age 88. Born in Massachusetts in 1926, he served during World War II in the U.S. Navy in the Pacific. Studying on the GI Bill, he graduated from St. Michael's College in Vermont.

He joined the Foreign Service during Eisenhower administration and served in a variety of diplomatic posts, as Latin America regional director of the Peace Corps and as a representative to the Organization of American States. But he will go down in history as the man who stood up for truth in a turbulent time in Latin America and who, after he was fired, continued his witness for the rest of his life.

One of the first visits White made after his arrival as ambassador to El Salvador in early 1980 was to Archbishop Oscar Romero of San Salvador. "There was a consensus we had to quiet down Romero, that we had to have the Vatican put pressure on Romero to stay out of politics," White told BBC reporter Mike Lanchin in 2013. "And I said that would be a great mistake."

Romero spoke to him, White recalled, about the coalition of the very rich and the military "at the top" and said he expected to be killed.

On March 24*, when a sharpshooter's bullet felled Romero as he said Mass, White received the news at a reception with military officers. They seemed unsurprised, White told the BBC. "I had the impression they knew in advance it was going to happen."

As ambassador to Paraguay appointed by President Jimmy Carter, who emphasized human rights in diplomacy, White is credited with saving the lives of several activists, and he revealed that the Nazi war criminal Josef Mengele held Paraguayan citizenship.

A shift came with the Reagan administration, which emphasized anticommunism and considered an ally whatever governments might claim to be anticommunist. The State Department turned a blind eye to information about human rights violations by the Salvadoran government.

"I will have no part of any cover-up," White said he told Haig. "All the evidence we have, and it has been reported fully, is that the Salvadoran government has made no serious effort to investigate the killings of the murdered American churchwomen."

In a tribute, former CIA analyst Melvin A. Goodman, a fellow at the Center for International Policy and a Johns Hopkins University professor, said the CIA opposed White because the ambassador stood against the agency's program to develop secret police forces in collaboration with Latin American authorities. "White knew that the violence that ensued from this collaboration was responsible for the wave of emigration to the United States as people were fleeing from instability," Goodman wrote.

In recent years, White provided a modicum of justice for victims of violence in El Salvador by serving as an expert witness in successful trials of individuals living in the United States who were charged with egregious rights crimes.

In cases brought by the San Francisco-based Center for Justice and Accountability, Gen. Eugenio Vides Casanova, head of the National Guard when the churchwomen were killed, was found guilty for overseeing torture; and a participant in the death squad that murdered Romero was found guilty, in a case where the judge said, "The damages are of a magnitude that is hardly describable."

White also testified in a case of a top commander who became a U.S. citizen, the first time a jury in a contested case has found a commander liable for crimes against humanity. At that trial, White revealed that former Vice Minister of Defense Nicolás Carranza had been a paid informant for the CIA. White said he tried to have Carranza taken off the payroll in 1980 because of his deplorable rights record, but failed. On the witness stand, Carranza said he had been receiving money from the U.S. government since 1965.

White's eyewitness accounts and diplomatic cables, warning Washington against facilitation of the witch hunts of right-wing Latin governments against their own people, and delineating the structures of terror among authorities the U.S. supported in El Salvador, are invaluable for the historical record.

"We learned who was responsible for the murders of the four American churchwomen in 1980, about death squads, torture and mass killings," Stanford University professor Terry Karl said in a privately circulated tribute to White. "He had the courage and honesty to report what was actually happening."

Karl, a scholar who has served as an expert witness in global war crimes trials, and as adviser to the House Subcommittee on the Western Hemisphere, worked closely on the Center for Justice and Accountability trials with White. "He loved Central America and the Central Americans and he loved the United States, wanting it always to be the best country it possibly could," she said.

White is survived by his wife, Maryanne; their son, Christopher; their daughters, Claire Kelly and Marylou White; and three grandchildren.

*The date of Romero's assassination was incorrect in an earlier version of this story.

A version of this story appeared in the Jan 30-Feb 12, 2015 print issue under the headline: Ambassador Robert White dies at 88.