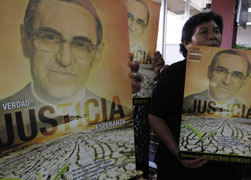 Salvadorans carry placards with the image of Archbishop Oscar Arnulfo Romero during the unveiling of a monument for the slain archbishop in Comalapa, near San Salvador, March 24. (CNS/Reuters)

[Dean Brackley is a U.S. Jesuit priest and a professor of theology at the University of Central America in San Salvador. He went to serve in El Salvador in 1990 after six Jesuit priests and two coworkers were murdered by the Salvadoran army on the campus of the university. This is the homily he preached at a Mass marking the 30th anniversary of the assignation of San Salvador Archbishop Oscare Romero.]

Those of us who were born in the U.S. give thanks to our Central American sisters and brothers for the gift of Monseñor Romero and for your faith and witness. Some of you bear the scars of war, the burden of poverty and suffer now from unjust immigration policies. History has joined us together, permanently.

Thanks to him, it is easier to imagine what Jesus was like. It is easier to understand why they killed Jesus: for the same reasons they killed him. It is not so hard to see how a life and a death like his produces hope and new life. Shortly before he was killed, he gave this unforgettable testament:

As a pastor, I am obliged by divine commandment to give my life for those I love. . . even for those who would murder me. . . . For that reason, I offer God my blood for the redemption and resurrection of El Salvador. . . . Martyrdom is a grace that I don’t believe I deserve. But if God accepts the sacrifice of my life, may my blood be the seed of liberty and sign that this hope will soon be a reality. May my death, if it is accepted by God, be for the liberation of my people and a testimony of hope in the future. (March 1980).

Monseñor Romero grew up in the poor eastern town of Ciudad Barrios where, like Jesus, he learned the trade of a carpenter at his father’s side. He entered the national seminary, then studied in Rome and was ordained a priest there in 1942. After another year of studies, he returned to his native diocese of San Miguel where he worked for 23 years in parishes and as secretary of the diocese. He was renowned for his pastoral zeal, his preaching and his concern for the poor. But he had little appreciation of the dynamic relationship between wealth and misery and its implications for the faith.

In 1967 he was called to the capital to serve as secretary to the national Bishops Conference and ordained a bishop himself in 1970. Four years later he was named head of the southeastern diocese of Santiago de Maria. There he began to grasp the nature of structural poverty and state-sponsored repression. In early 1977, at the height of national crisis and at the behest of conservative sectors of society, Romero was named archbishop of San Salvador. A few weeks later, the Jesuit pastor Rutilio Grande was murdered for his outspoken defense of the poor. This shook Romero, who soon realized that the government would not investigate the crime. As he spoke out, Romero found that those who had been his friends abandoned him, and those who had been vilified as communists and radicals stood by him, ready to help. As the veil fell from his eyes, and persecution mounted, Romero quickly became the prophetic voice of the voiceless. He shaped a local church that accompanied the poor in their suffering and their struggles, and paid the price. After three dramatic years as archbishop, he fell victim to an assassin’s bullet at the age of 62.

Happy are you poor people who hunger and weep. Not because suffering is good, of course, but because God is coming to rescue you from your poverty and hunger. Not because you are morally good, but because God is good and merciful. Woe to you who are rich and full and who laugh now. What’s wrong with laughing? Nothing, of course. What’s wrong is that the rich man is dining in sumptuous robes and laughing, while poor Lazarus longs to eat the crumbs from his table. So, does God hate the rich? Of course not. When he stays overnight with the rich man Zachaeus, Zachaeus gives half of his belongings to the poor. Jesus rejoices: “Salvation has come to this house today!” Besides God’s option for the poor, Jesus shows us God’s preferential option for sinners. That was even more scandalous.

God takes the side of the victims. God is like the mother who runs to defend her younger child when her older child is picking on the younger one. She loves them both, naturally. Today, God takes the side of the worker exploited on the job, but God takes the side of his wife when he returns home and abuses her. Whoever takes advantage of the weak will answer to God for it. To announce the good news of God’s reign today is to say that God’s comes to undo unjust social relations and to offer all of us a new way to live: as brothers and sisters in a new world.

4. Church of the Poor

This message of good news gave meaning to Monseñor Romero’s whole ministry, to the sacraments, popular devotions and everything else. He understood that if the message of the church is not good news for the poor, then it is not the gospel of Jesus Christ.

His message was credible because he lived it. He refused the government’s offer of armed protection on the grounds that his people enjoyed no such provisions. He spoke with authority, because, like Jesus, he did not speak in his own name. He spoke for the poor and in God’s name.

His ministry gave shape to the church of the poor. His pastoral strategy was “acompañar,” to walk with the people in their suffering and their hopes. He placed the poor at the top of the church’s agenda. Monseñor did not first ask, “How will this measure affect the church?” but rather “How will this affect the poor?” He drew others in, constantly asking for help. Since he listened, he won a hearing. Poor, illiterate people treasure how he stopped to ask their opinion and listened patiently to them. This gave him authority to criticize the popular organizations when necessary. “The poor have shown the way forward for the Church,” he said. “The Church that does not join itself to the poor to denounce, from there, the injustices committed against them, is not the true church of Jesus Christ” (Feb. 17, 1980).

We are here so many years after his death, because we recognize him as a model Christian and a model bishop. I believe he will someday be recognized as a Doctor of the Church. Like the Church Fathers of old, I dare say he is a Father of the church of the poor. The church of the third millenium will have many Mothers, like Dorothy Day, as Fathers. Still, Romero will surely be one of its fathers.

Monseñor Romero points the way for us. This way forward! Make no mistake: Unless the Christian church follows his example in fulfilling its mission, there can be no solution to the spreading misery, violence and environmental crisis that threatens to do us in.

We are up against it today.

The root cause of these evils is idolatry in the fearful quest for a false security. The idols of wealth and power demand human sacrifice.

It was clear in El Salvador in 1980 that speaking the truth was the most powerful weapon anyone had for overcoming evil. That remains true in this time of smoke and mirrors, hysteria, lying in public and a thunderous silence about inequality, concentration of wealth and militarism. Romero lamented that “The corruption of the press is part of our sad reality, and it reveals the complicity of the oligarchy” (Feb. 15, 1980).

The Church cannot remain silent in the face of those injustices of the economic order, of the political order, of the social order. If the church were to keep silent, it would be an accomplice with those who stand aside and doze in a sickly and sinful conformity . . . . And these are substantial matters, not matters of little importance. This is a question of life or death for the reign of God on this earth. (July 24, 1977)

The church is called to speak out and to act, when prisoners of war are held for years without charges and hundreds are abused and “disappeared,” when government lawyers try to justify torture, and especially when God’s name is invoked to defend such things.

Archbishop Romero’s memory invites us to become the church of the poor, to break our Constantinian alliances and pact a new alliance with the powerless as Jesus did.

In this season of grace and conversion, on the eve of Holy Week, Monseñor reminds us that God calls us to be better. God has only one way to change the world: by calling each of us by name to let God transform us as he did Monseñor. During his retreat the month before he died, Monseñor wrote these words which you can read on a plaque at the entrance to the chapel where he was martyred: “My attitude should be to give my life for God, however my life may happen to end.” He speaks of his coming death and concludes: “But more valuable than the moment of death is giving over my whole life to him and living for him.” That is what is most important for us. To give our whole lives in love to God. If that love is possible, as Monseñor has shown us it is, pues, ¡otro mundo es posible! Another world is possible. Not only that; we believe that with Jesus that new world is already underway; and his resurrection, which we see reflected in the resurrection of Monseñor Romero in the people, assures us that, despite all appearances to the contrary, the victory is guaranteed. We shall overcome some day! ¡Todavía cantamos, todavía esperamos! We will struggle on together, inspired by our martyr and pastor, filled with hope.

Anticipation high ahead of Romero anniversary