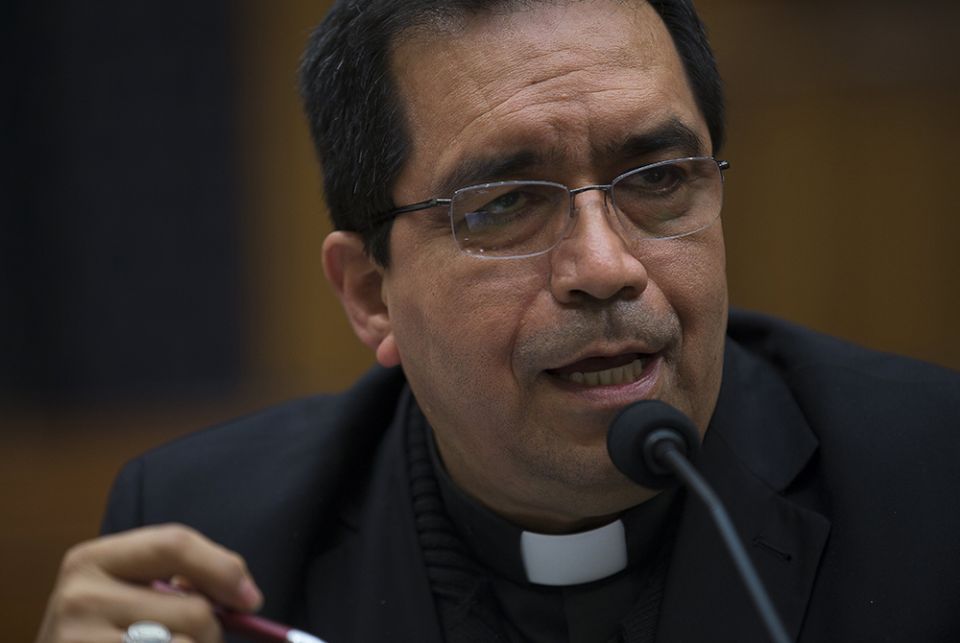 San Salvador, El Salvador — The head of the Archdiocese of San Salvador refused to allow a judge access to church records on one of the largest modern-day massacres in Latin America, saying in a Jan. 17 news conference that he's simply protecting victims.

San Salvador Archbishop José Escobar Alas was heavily criticized for his decision to block access to documents the archdiocese has on the 1981 massacre of El Mozote, where 800 to 1,200 Salvadoran civilians, including many children, were slaughtered by government forces.

"We can't just open the doors to anyone who wants to inspect, to take whatever information they want," the archbishop said.

But the "anyone" who wants to see the church documents is a judge armed with a warrant.

In a long explanation to a journalist's question asking about why he was denying access, the archbishop said he was following a different court order to protect victims.

Tutela Legal, the human rights office that houses the archives under the auspices of the Archdiocese of San Salvador, has gathered evidence of human rights violations extending back to the time of El Salvador's conflict starting in the 1970s and 1980s.

In 1977, when St. Oscar Romero was Archbishop of San Salvador, the office was a place where the poor and disenfranchised could have their stories of disappeared or murdered loved ones documented. The hope was to house the information in the archive to locate the person, dead or alive, or at least document the abuses that led to his or her killing and eventually have the perpetrators face justice.

In 2013, Archbishop Escobar abruptly closed the office, causing international outcry from the human rights community. Its contents include information on still-unresolved and unadjudicated cases, including the El Mozote massacre.

Though the Tutela Legal office later reopened, it lost the luster it had once had as a defender of human rights under St. Romero and his successor, Archbishop Arturo Rivera Damas.

Escobar's refusal was seen as yet another blow to those trying to find justice for the victims of the massacre. El Salvador's army, too, has blocked the same judge from accessing its records.

Though Salvadoran President Nayib Bukele, who commands the armed forces, had promised he would do everything possible to open up the documentation the army has related to the massacre, he later said the judge had no jurisdiction over the armed forces and did nothing to make sure the warrant was honored.

In December 1981, during a period of two days, soldiers rounded up the villagers of El Mozote, raped girls and women and later murdered all but one villager, Rufina Amaya, who survived by hiding.

She was represented by the archdiocese's Tutela Legal office, and her account is part of the archive.

Escobar, in presenting various reasons why he would not allow the church's archives to be viewed, said a separate court had ordered that names be held in confidence until the case is adjudicated.

He said in the past, various entities — including a past president — have sought to take away documents in the archives, and the archdiocese has a right to protect them.

"No one can violate the archives in that manner, kidnap them," he said, adding that there were victims on both sides.

"This information cannot fall into the hands of their enemies," he said.

David Morales, a lawyer with the human rights group Cristosal, who has prosecuted the El Mozote case, said the archbishop's statements were "lamentable" and based on "disinformation."

He said the archbishop needs to reread the order he thinks prevents him from cooperating, because it says he is obligated to collaborate with judicial authorities in any investigation involving human rights violations.

He also said lawyers want access to simply inspect or view historical material describing the life of the communities collected after the massacre, not individual accounts.

"It's information that would help victims," Morales said. The order from the judge that the archbishop objects to is one that is backed by those representing the victims, he said.

Otherwise, the archbishop will be placing himself in a "position that affects the judicial process, and that would end up favoring the perpetrators."

The archbishop also is facing controversy over his view of the peace accords that ended the war in El Salvador in 1992, seeming to also echo Bukele, who called them a "farce."

Both men said the accords had done little to bring peace to El Salvador, which still faces high homicides rate and random violence from gangs. But the Catholic Church, including Cardinal Gregorio Rosa Chavez, played a significant role in championing the agreements.

On Jan. 16, their accords' 29th anniversary, the cardinal, along with Salvadoran Bishop Oswaldo Escobar of Chalatenango, three Jesuits priests, and other Christian faith leaders signed a statement supporting the accords after they were criticized by Bukele.

Set My Hands to Heal