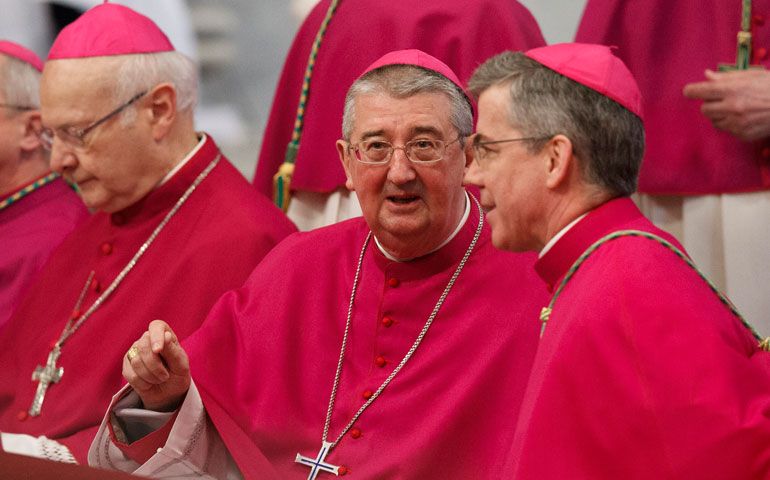 Dublin — Archbishop Charles Brown, apostolic nuncio to Ireland, was principal ordaining prelate of a new bishop of Cloyne Jan. 27 in accord with a pastoral strategy approved by Pope Benedict XVI to restore trust in the Irish church leadership after two decades of clerical scandals and cover-ups, senior ecclesiastical sources have confirmed.

Unlike his Italian predecessors who were trained diplomats, Brown's previous post was as a theologian in the Vatican's Congregation for the Doctrine of the Faith, where he had worked since 1994. It was Benedict, former prefect of the congregation as Cardinal Joseph Ratzinger, who plucked Brown from the doctrinal congregation to improve relations with the Irish government and refashion the church's leadership.

A year after his accreditation in February 2012 as Benedict's representative in Ireland, American-born Brown is implementing his mandate to recommend to the Holy See candidates to at least seven of Ireland's 26 dioceses.

Within the past few months, Brown promoted theologian and ecumenist Brendan Leahy as bishop of Limerick, parish priest William Crean as bishop of Cloyne in County Cork, and Eamon Martin, nationally unknown but secretary to the Irish Catholic Bishops' Conference, to become coadjutor archbishop of Armagh. This confers canonical right on Martin to succeed to the traditional see of St. Patrick and primacy of all Ireland when Cardinal Sean Brady reaches 75 in August 2014. Brady became a lame-duck leader after it was revealed two years ago that he had sworn to secrecy in 1975 two boys abused by notorious monk pedophile, the late Fr. Brendan Smyth. Brady retains a vote in any papal conclave till August 2019.

"Brown is the architect of a renewed Irish church leadership designed to restore integrity to a national church, which nose-dived after centuries of dominance in Irish society as a result, internally, of two decades of scandals and, externally, from growing secularism," said the senior sources close to decision-making.

In an interview they agreed: "Brown has revealed a definite pattern in the selections. An appointee is not native to the diocese he is being assigned to. Leahy is a 'Dub' [a Dubliner], Crean a Kerryman, Eamon Martin a Derryman. So you can be sure that future appointees to Ardagh-Clonmacnois, Derry, Elphin and Kerry will not be local men."

These sources, who asked not to be named but were present in Cobh when the new bishop of Cloyne was ordained, added: "The appointment of Crean to Cloyne was a shrewd choice by the nuncio. His popularity in the province of Munster was obvious in the jubilant reception he received from his clerical peers in Cork and Kerry."

Brown's central participation in these episcopal ordinations provided a timely symbol of his influence over the Irish hierarchy.

Brown was assisted by the archbishop of Cashel, Dermot Clifford, who five years ago was appointed caretaker administrator of Cloyne after Bishop John Magee, a former secretary to three popes, stepped aside amid national outrage of his mishandling of child sexual abuse complaints in the small rural diocese of 46 parishes with a population of 100,000.

Magee, whose resignation was accepted three years ago by Benedict, has been in retirement after formally apologizing in a statement to victims for putting children in danger as a result of his failure to implement protection policies agreed upon by the Irish episcopal conference. For this, an Irish government Commission of Investigation severely criticized Magee, who was not present at Crean's ordination to succeed him.

Crean received a rousing welcome for attacking the economic devastation affecting ordinary families as a result of the financial recklessness of bankers, while promising to continue Clifford's work of child protection and fostering reconciliation with victims of clerical child abuse. Barbara Blaine, president of the U.S.-based Survivors Network of those Abused by Priests (SNAP), said her organization was hopeful that Crean "will hold true to his pledge to keep children safe and continue the work of healing those who were violated."

It is not yet known who will be chief celebrant when Martin is installed in St. Patrick's Cathedral in Armagh April 21, but Clifford will be the main consecrator at the episcopal ordination of Leahy April 14 in Limerick.

The senior sources predicted that, like Leahy and Crean, "future appointees will probably be in their early 60s who will define short- and medium-term goals. This is a good management strategy."

Noting the exception of the 51-year-old Martin, they described him as "the youngest member of the hierarchy and the man to lead the church in the post-Brady era."

Speculation has centered on the linked questions of whether Dublin Archbishop Diarmuid Martin was bypassed for Armagh and which Martin will get a red hat.

It is generally supposed that Diarmuid Martin did not want to go to Armagh, sharing the view of the Church of Ireland's previous archbishop of Dublin, John Neill, who six years ago declined to leave cosmopolitan Dublin for Northern Ireland as Anglican archbishop of Armagh.

Both Martins are of strong character. But Eamon, a mathematics teacher and a musician, cannot compete with the broad range of cultural, pastoral and life experience that Diarmuid acquired over almost two decades as a diplomat with the Holy See before being sent to Dublin as assistant with right of succession to Cardinal Desmond Connell.

At his first news conference Jan. 18, Eamon Martin attacked the Irish government's decision to introduce legislation to allow for limited abortion. It emerged too that last December he attended a Vigil for Life rally outside parliament and this appears to have won him the Armagh job.

Eamon Martin's insistence that there is no need to legislate lacked the diplomatic nuance of the equally pro-life Diarmuid Martin. But Eamon's directness on this major difference with the Irish government impressed Brown and Rome.

However, this left Eamon open to rebuff from Ireland's prime minister, Enda Kenny, who insists the government will not be diverted from legislation following public furor over the death last October of Savita Halappanavar at University Hospital Galway. Halappanavar, an Indian Hindu, died after suffering a miscarriage of her 17-week pregnancy. According to her husband, when Halappanavar sought treatment, the hospital refused to perform an abortion because the fetus, though nonviable, still had a heartbeat. Halappanavar died of septicemia several days later.

Brendan Butler of the We Are Church lay movement surmised that "the Derry Martin is Charles's darling as the Dub Martin is a challenge for Charles and may feel an understudy to the Dub. If you are in power and you help to promote someone then a connection of power and dependency is born and flowers."

Pointing out that Dublin's Martin is a great friend of Canadian Cardinal Marc Ouellet, prefect for bishops who is presently tipped as papabile, Butler suggested, "If Benedict dies over the next few years and if Ouellet becomes pope, then the Dubs have their man in line for a cardinal prefectship in the Curia."

Having two Martins at the top of the Irish church is going to cause prolonged conundrums and produce acres of clerical gossip. Considered by Northern clergy to be "a thoroughly good fellow," Eamon has time to grow in stature. He will be the boss of the bishops of Ulster, who constitute a more compact group than those in the three other provinces of Leinster, Munster and Connaught. The Ulster bishops meet regularly to coordinate their positions on education, the Irish peace process and social justice matters.

In Eamon's case he will be dealing also with the Dublin government as the Armagh archdiocese is a cross-border one, containing a stretch of County Louth in the Irish Republic.

[John Cooney is a journalist and historian.]