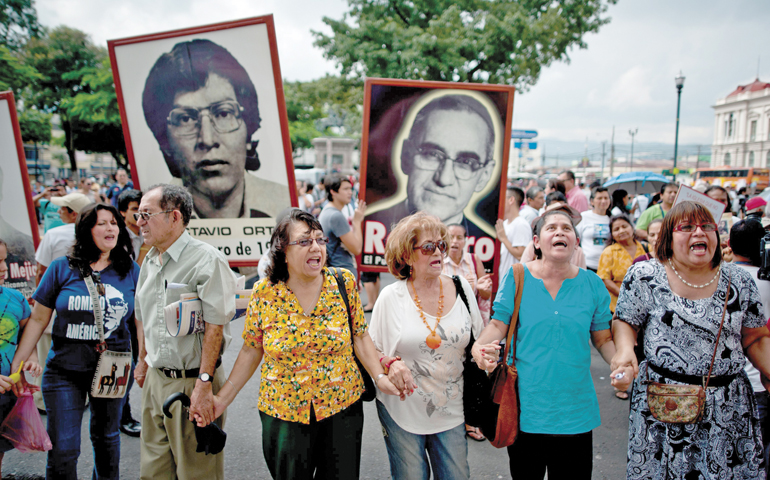 A firestorm of protest and dismay has greeted the abrupt closing of the Catholic church's legal aid office that has since the 1980s provided staff, administrative support, and documentation to victims of the most egregious human rights violations of El Salvador's civil war.

Archbishop José Luis Escobar of San Salvador, the nation's capital, ordered the closure Sept. 30 without notifying staff beforehand. The closure puts at risk the repository of testimony, documentation and photographs for some 50,000 crimes, including massacres, political killings and cases of torture and disappearances during the civil war that ended in 1994.

"We had no idea this was going to happen," said former director Ovidio Mauricio. "We do not know how we can continue to represent the victims as they have no resources, and neither do we without Tutela Legal," he said, using the office's Spanish name.

Archbishop Oscar Romero founded Tutela Legal to give legal assistance to poor Salvadorans. Documentation of Romero's assassination in 1980 are among the records in the now-closed archive, as is the documentation of the 1989 murders of six Jesuit priests, their housekeeper and her daughter at José Simeón Cañas Central American University in San Salvador.

The closure comes in the wake of a Supreme Court decision to consider vacating a postwar Amnesty Law that has since 1993 protected government officials, military officers and guerrilla leaders from prosecution for acts committed during the 1980-92 civil war.

Military officials, the political right and Escobar have spoken out against eliminating the law. The archbishop has called it "imperfect" but suggested to local press it may be serving "to prevent the fall anew into a spiral of demands that cannot be fulfilled."

On the morning of Sept. 30, a lawyer, a psychologist and others of 13-member staff of Tutela Legal arrived as usual at their offices in a building owned by the archdiocese to find door locks changed and security officers previously unknown to them guarding the premises.

A representative of the archbishop informed staff members, some with decades of service, that they were fired as of that moment and ordered them to clean out personal belongings and leave.

Victims protested that the legal advocates with whom they had worked for years could not be summarily sacked, left with long-standing commitments to cases they pledged to honor but without resources -- let alone accumulated files -- to do so.

Days after it shuttered Tutela Legal, the archdiocese appeared to change its narrative and announced the closure was part of an unremarkable reorganization process. Days later, the story changed again: The archbishop said he closed the office because of malfeasance but could not make details public.

The country's human rights ombudsman, David Morales, is a lawyer who was fired from Tutela Legal in 2007 by Escobar's predecessor, Archbishop Fernando Sáenz Lacalle, when Morales insisted on taking Romero's case to the Inter-American Commission on Human Rights in Washington, D.C.

Morales has said if he finds the archives threatened, he will consider legal action against the archdiocese.

El Salvador's secretary of culture of the presidency, Ana Magdalena Granadino, announced that her office would declare Tutela Legal's archives a national treasure, of unique value for understanding the history of the country, so that their "preservation and protection is of vital importance as much for the Catholic church as for the Salvadoran people," local media reported Oct. 15.

Escobar has pledged that the archives will be protected, but this has not eased fears.

The way the archbishop has dealt with Tutela Legal has done "real damage," said Terry Karl of Stanford University, an expert witness in human rights cases who has testified before the U.S. Congress, the Supreme Court, the United Nations and other venues. She said much of the data for her testimony in cases involving Salvadoran accused war criminals came from Tutela Legal.

Recently, Karl testified in a Connecticut immigration case against a Salvadoran army colonel, Orlando Montano, implicated in a Spanish case for the 1989 killings at Central American University. His conviction makes him liable to extradition to stand trial in El Salvador.

Karl called the archbishop's closure of the rights office "especially worrisome" at the very time such prominent cases may be seeing light in court.

Last year, the Inter-American Court of Human Rights ruled the Salvadoran Amnesty Law invalid in the case of Latin America's biggest modern massacre, at El Mozote in 1981, where more than a thousand persons died at the hands of U.S.-trained soldiers. The Salvadoran Supreme Court has ordered the case reopened in national courts.

Escobar has said he is creating an ad hoc commission to carry on the work of Tutela Legal, and Oct. 14 named four priests to oversee the commission's formation. Among them are Fr. Jaime Paredes, known for his social outreach, and Fr. José María Tojeira, Central American University's former rector who has long insisted "not on vengeance but justice" for the killers of the Jesuits.

None of the priests charged with overseeing the formation of a successor to Tutela Legal is a lawyer.

Victims and human rights groups have addressed a letter to Pope Francis, asking him to reinstate Tutela Legal. Paid ads in national newspapers signed by human rights and legal advocates, academics, and other prominent names from 16 countries condemned the closure and called upon Escobar to review his decision.

Ana Miriam Amaya traveled to San Salvador to protest the closure of Tutela Legal. She and other survivors of the civil wars complained that the archbishop has made no contact with them, let alone consulted with them on their cases being transferred out of trusted hands.

"How can we agree with something we know nothing about?" she was quoted in ContraPunto, an independent El Salvadoran news site.

"No one except ourselves as plaintiffs shall decide who represents us," victims said in a joint statement. They were not consulted about the commission of priests and are not represented among them, the statement said.

A version of this story appeared in the Oct 25-Nov 7, 2013 print issue under the headline: Salvadoran archbishop shutters legal office.