Victims of the 2019 Easter Sunday attacks were buried at St. Sebastian's Church in Negombo, Sri Lanka. More than 300 people died in the bombings, including about 150 at two Catholic churches. (NCR photo/Thomas Scaria)

On Easter Sunday 2019, suicide bomb attacks by Islamist terrorists in three churches and three prominent hotels in Sri Lanka killed nearly 300 people, including 45 foreigners, and wounded more than 500 others.

More than two and a half years later, families of the victims are still seeking answers from the government about warnings it received well before the blasts about growing Islamic radicalization and the possibility of violence against the island nation's small Christian community.

Cardinal Malcolm Ranjith of Colombo, the capital, has sought international intervention to get justice for the victims. In an Oct. 22 interview with NCR, Ranjith castigated the Sri Lankan government for what he called a slow investigation that he says has delayed justice. 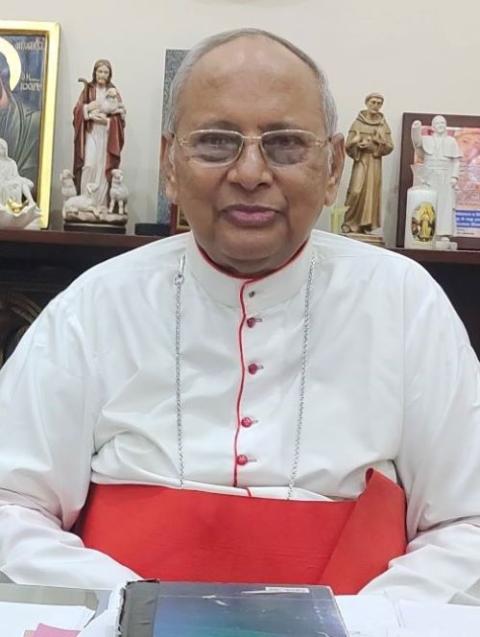 Cardinal Malcolm Ranjith, archbishop of Colombo, shown at his residence in the Sri Lankan capital on Oct. 22, said he received a letter from Pope Francis pledging the universal church's support in the church's fight for justice in the 2019 Easter Sunday bombings. (NCR photo/Thomas Scaria)

"The attack on Easter Sunday 2019 was not carried out by just a group of suicide bombers. It involved meticulous planning and implementation by some who are still hiding," said the cardinal, who has served as the country's highest-ranking church official since 2009.

Ranjith said he had lost trust in the nation's ability to deliver justice and even alleged that government officials might try to "cover up something." He said he has appealed to the U.N. Human Rights Council in Geneva.

Sri Lanka, whose population is about 70% Buddhist and 6% Catholic, has long been the site of religious and ethnic conflicts. A 1983-2009 civil war was fought primarily between the country's two major ethnic groups: the Tamils and Sinhalese. In recent years, Islamist terrorists have targeted both Buddhists and those of other minority religious groups.

Two Catholic churches were targeted in the April 21, 2019, bombings. About 150 people were killed at those churches, according to news accounts.

A day before the NCR interview, the cardinal had visited both churches: St. Anthony's Shrine in Colombo and St. Sebastian's Church in Negombo. He consoled the victims' families at a ceremony marking 30 months since the attack.

Ranjith said he had received a letter from Pope Francis pledging the universal church's support in the Sri Lankan church's fight for justice. "We are not here to take revenge upon anyone, nor have we called for anyone's blood. But we need justice," the cardinal said.

Meanwhile, people in Katuwapitiya are finding it hard to move on with their lives.

"I don't know whether we got justice or not, but I lost my father, mother and grandmother in the bomb attack and no one can fill that void," Devanjalee Fernando told NCR. A brother is her only surviving family member.

Fernando was studying medicine in China when the attacks occurred. Afterward, her aunt, Franciscan Missionaries of Mary Sr. Samanthi Kuruppuarachchi, took care of the Fernando siblings with special permission from her congregation.

"Now, our aunt also has gone back to her convent and we need to continue our life," said Fernando, remarking that the situation might look "normal for others, but for us, life is still not so normal."

Fernando said she has almost stopped going to church because she cannot cope up with stress. "We are not afraid of any further bombing, but have not come out of the trauma," she told NCR.

The presence of military forces in church since the Easter attacks gives "a feeling of uncertainty and fear," Fernando said. The government, she added, has "done everything to console the victims and compensate them, but it still protects the real culprits."

Sri Lankan President Gotabaya Rajapaksa has assured the Catholic bishops' conference that a presidential commission probing the attacks will continue its work until the culprits are held accountable.

"But justice is delayed," Fernando said.

On Feb. 22, the commission submitted its report to the Sri Lankan parliament, indicting 24 suspects from Islamic groups as well as some high-ranking government officials accused of ignoring intelligence reports of a possible attack.

Only the recommendations in the 22-volume report have been published.

The report recommended banning all terror groups in Sri Lanka, initiating dialogue and promoting better understanding among religious groups, and punishing those responsible for serious security lapses leading to the attacks.

The report also held former president Maithripala Sirisena, who stepped down in November 2019, responsible for the security lapses.

Ranjith alleged that the government "has done nothing to implement those recommendations or continue the investigations into the gray areas mentioned in the report."

The cardinal blames a power struggle between the then-president and the prime minister for the security lapse. The government had ignored the intelligence reports from neighboring India too, he alleged.

Two local Muslim groups attached to the so-called Islamic State (ISIS) have been blamed for the attacks. Four days after the attacks the Islamic State took responsibility for them, but the February report did not find evidence of a valid link between the Sri Lanka groups and ISIS.

According to the cardinal, the attacks were orchestrated to trigger a civil war by inciting Christians to retaliate against Muslims.

"But, we did not allow any civil war to happen," Ranjith said. "I visited places wherever some sporadic violence against the Muslims were reported and asked our people to refrain from any reactions." 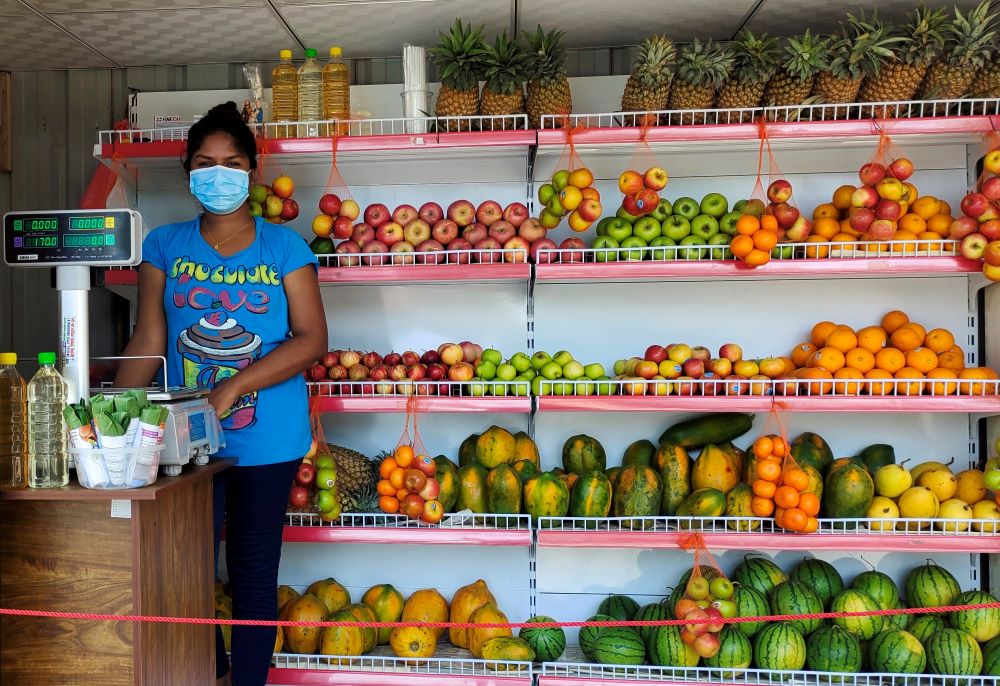 Nirmanu Appahami, a youth leader and fruit vendor near St. Sebastian's Church witnessed the April 2019 Easter Sunday attack, which killed about 100 people at the church. She said church members cannot forget the "horrible scenes" of the bombings. (NCR photo/Thomas Scaria)

Sri Lankan army members now guard both churches, allowing entry only to those with identity cards.

Billboards, posters and banners near both churches demand justice for the bombing victims.

"Easter Sunday Massacre! We Cry for Justice! Who ran the operation behind the curtains? Will the Law be enforced against those who were found to be negligent?" read some banners on the wall of a cemetery where the victims were buried. Similar banners were found in front of many churches and the cardinal's residence.

Manirathnam, a vegetable vendor near St. Anthony's Shrine, said that although the military presence is to protect them, "it gives the impression that worshipping God is a risky affair."

Fr. Jihan Fernando, a priest at the shrine, said the church continues to get regular devotees and thanked the government for the military protection.

"In fact, the faith of the devotees seems to have increased and they are not scared of any such attacks," he told NCR.

Nirmanu Appahami, a young fruit vendor in front of the Negombo church said she finds people still fearful, as they cannot forget the "horrible scenes" of Easter Sunday whenever they visit the church.

Appahami, who was in the church during the attack, escaped alongside her mother and father with minor bruises.

She said several children in the parish refuse to go to the church as the trauma still haunts them. The same is the case with the elderly, she told NCR.

"It is still haunting," said Appahami. She said people would be settled only after the perpetrators of the attacks are brought to justice.

Salvatorian Sr. Thushari Fernando, who coordinates the interreligious dialogue program for Caritas Sri Lanka, said the Easter attacks have widened the gap between Christians and Muslims in the country.

"There is a visible social distancing between the two communities," she told NCR.

She said the 30 years of civil war had not scarred the minds of the Catholics the way the Easter attacks have done.

"The Easter Sunday attacks have left much deeper wounds," she said.

Ranjith said the church has taken initiative to promote dialogue among Muslims, Buddhists and Hindus. "We have good relations with all communities," he said, stressing that the Easter Sunday attacks were "not a religious attack, but a political conspiracy."

A version of this story appeared in the Nov 12-25, 2021 print issue under the headline: Sri Lankan cardinal demands justice for bombing victims.