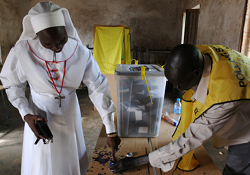 JUBA, SUDAN -- Paolino Lukudu Loro, the Archbishop of Juba, was smiling after casting his vote late Sunday afternoon here, towards the end of the first day of a weeklong referendum that will likely lead southern Sudan to split from the northern part of the country.

Southern Sudanese packed the polls all day Sunday and so far, fears about violence or other tampering appeared to be unrealized.

“Everybody is just very happy and very peaceful,” said Loro, as he prepared to leave the polling place, the Hai Jelaba Basic School. He gestured towards the crowd of roughly hundred men and women waiting patiently in line. “They don’t want any war or any trouble. They want peace. And I think these people have decided to live their own lives as Africans and as peacefully as possible.

In Juba, the capital of the region, the day was marked by a large and vibrant celebration at the polling place located near the burial site of John Garang, considered southern Sudan’s founder.

Southern Sudan’s president Salva Kiir voted as soon as the polls opened around 8 a.m., followed by a group of so-called “Lost Boys” -- former child soldiers pressed into service during Sudan’s brutal and lengthy civil war that killed an estimated 2 million people. Many refugees and those who are emotionally scarred from the conflict have returned to their country in order to vote.

Southern Sudan is widely Christian and animist. After years of warring with the North, which is largely Arab, its population widely favors secession.

Among the many who voted was Sacred Heart Sr. Veronica Daniel.

“I voted for separation,” said Daniel, when asked later about her vote. “Because I want to be a first-class citizen in my own country. I don’t want to be oppressed by others.”

The voting will continue for a week and the tally is expected to take several weeks more. Presuming international observers find no irregularities, formal independence will take place in six months if all goes according to plan.

In a sign of Southern Sudan’s close relationship with Catholicism, the second big event of the day was an 11:30 a.m. mass at St. Theresa Parish, Juba’s largest Catholic church. Kiir and U.S. Senator John Kerry -- both with tall and lanky builds -- sat side-by-side at the very front of the church in two large armchairs. Actor George Clooney also attended.

Kerry, whose Catholicism became a political issue during the 2004 U.S. presidential election when he was once denied communion because of his pro-choice position, spoke at the lectern on the importance of faith, humility and forgiveness.

“It is faith that has brought the people of southern Sudan to the brink of nationhood,” said Kerry. “And it is faith that will carry you through the coming months and into a future that is at the same time bright with promise even as it is filled with challenges.”

Kerry clearly intended to encourage continued peace amongst the Sudanese people, as the southern portion of the country must not only maintain close economic and political ties with the north even if secession occurs, but must also maintain unity amongst the different tribal and ethnic groups within its own borders.

“Every organized religion, every single philosophy of life on this planet, all of them, embrace a shared commitment to the golden rule,” said Kerry. “Do unto others, as you would have them do unto you. These concepts have never been more vital to your future than they are today.”

“So,” he continued. “If you see beyond the sins of the past and move together with your brothers and sisters in the north you can create a partnership that will leave violence and hatred and war behind and work together to benefit all the peoples of Sudan.”

International experts emphasize that Sudan’s future stability remains in doubt. The southern area of the country has little infrastructure or developed industry. While it has a wealth of oil, it is landlocked.

The refineries are located in the North, which is led by President Omar Al Bashir, an indicted war criminal. While in recent days he has said his government will accept an independence vote, he also said that southern Sudanese living in the north would be treated as foreigners.

Editorial: Cease-fire and stability should be the goal in Syria

'You have to have faith,' Bahamian resident says of Dorian recovery

In Chile and Peru, pope to see effects of Latin America's migration