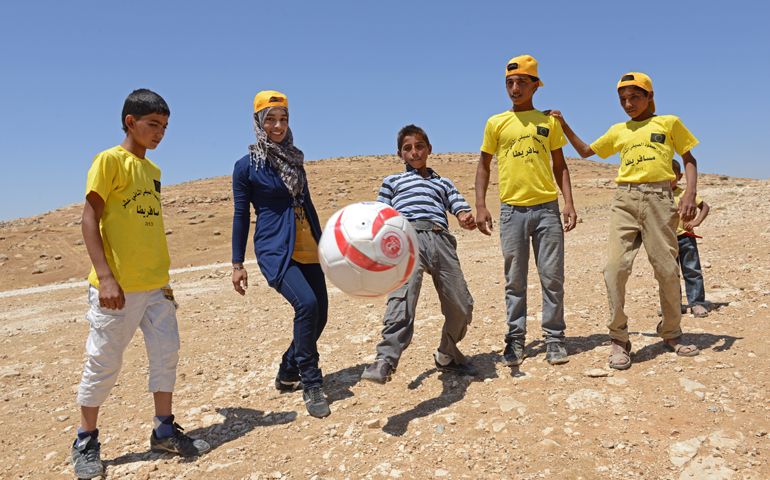 Youths from the South Hebron Hills kick around a soccer ball June 28 at summer camp in the West Bank village of Tuba. (CNS/Debbie Hill)

Tuba, West Bank — In this tiny South Hebron Hills encampment of tents and cave dwellings, where camels cling to the sandy hillside and hardy goats scrounge for shoots of brush and desert grasses, it is summer camp time for the children.

It is not yet 10 on a late June morning and the heat is already intense. There is no shade. Camp counselor Amjad Addarah, 24, of nearby At-Tuwani village, has the boys lined up for a traditional debka dance in one part of the encampment. In another area, the girls, most with their hair covered, are practicing a song with counselor Intisar Addarah, 23. Later, the two groups will combine for a short performance.

Afterward, clutching blue helium-filled balloons, the children trek up a rocky, thorn-covered hill where they release them skyward.

"That balloon is going really far," said 12-year-old Yousef, pointing to his colorful orb above the horizon.

"It is extraordinary, usually the boys need to help with shepherding the goats, and the girls help the mothers. But for two weeks they get to play," said Matteo, a volunteer from Operation Dove, the nonviolent peace corps of the Italian-based Pope John XXIII Community.

He and the other camp volunteers asked that their real name not be used to avoid visa problems entering or leaving Israel.

After the two-week camp concludes, the children will spend time recounting the activities with their friends, said Mterah Jindieh, 50, who had five grandchildren joining the camp.

"The children are very happy ... but in two weeks' time, they will be back to their routine and will be bored with nothing to do," she said.

It is the 11th year in which the South Hebron Hills Popular Resistance Committee and the Alternative Information Center, a joint Palestinian-Israeli non-governmental organization promoting cooperation, have run a summer camp for the children of Tuba and four other villages. The European Union funds the program.

The camp is usually held in At-Tuwani, the largest of the South Hebron villages. It's where the children attend classes during the school year.

To get to At-Tuwani, the children of Tuba must walk past the Israeli settlement of Ma'on and next to chicken coops the settlers have built. At times, the settlers attack and harass the children, making for a perilous journey. During the school year, Operation Dove volunteers walk with the children and monitor their progress in order to dissuade attacks.

Only the children are permitted to go this way. Palestinian adults must take a longer route through the village of Yatta.

An Israeli Defense Forces escort is supposed to protect the children, but the soldiers do not always show up and seem not to take their job seriously, Matteo said.

This year, the camp met for two days in each village, giving all of the children a chance to host their friends. The camp is a special treat because of the distance between the villages and the danger in passing the Israeli settlement. Normally, there are no afterschool or summer visits with friends.

"They always have to travel very far to get to school in At-Tuwani," said Omar Abu Jundieh, 47, a father of five. "Now all the children are playing in the village with their friends. They are so happy to have their friends coming to them."

Three Operation Dove volunteers working in At-Tuwani have been helping with the logistics of moving the children to each village.

"In these two weeks of summer camp, our presence is more important," volunteer Pascal said.

Creating a sense of unity among the children scattered among the villages is important, said Hafez Huraini, leader of the South Hebron Hills Popular Resistance Committee.

So the parents in these communities allowed their children to spend the night in the other villages. The boys and girls ate separately. The boys slept outside, while the girls slept inside one of the tent homes.

"We talked about the way to get here and if they were scared coming here," she said.

All of the villages are situated in a region designated as Area C, which remains under full Israeli military and administrative control. Israel has declared the area a firing zone and the villages face threats of evacuation and demolition. Some of the villages have been destroyed repeatedly only to be rebuilt. Residents confront violence from the surrounding Israeli settlers and are denied access to their agricultural land. They have no electricity or running water even though the neighboring Israeli settlements do.

"They are all targeted for eviction," Huraini said. "What the army does after they confiscate the land is they build a settlement. There is settlement expansion to control the land, which the people depend on for grazing their sheep. The people here are all peasants and day after day they are losing their land. We are doing the best we can to let the children feel like children. Seeing their houses demolished is not easy."

At noon, when the heat has become unbearable, the children from At-Tuwani, along with Operation Dove volunteers, pile into a trailer pulled by a tractor -- the only vehicle the villagers have -- and are driven down the valley toward the path past Ma'on. They have called the Israeli Defense Forces and expect the escort to arrive soon.

But the children are anxious to return home and decide not to wait for the soldiers. Pascal calls Matteo, who is watching from above, along with Jundieh and Huraini. They anxiously watch as the group makes its way past the chicken coops. The adult monitors lose sight of the kids for a while as they round a bend past a grove of trees. Then there is a phone call from two other volunteers in At-Tuwani. They have sighted the group. The children are safely on their way.

Plight of Arab Christians is an outgrowth of Western policies