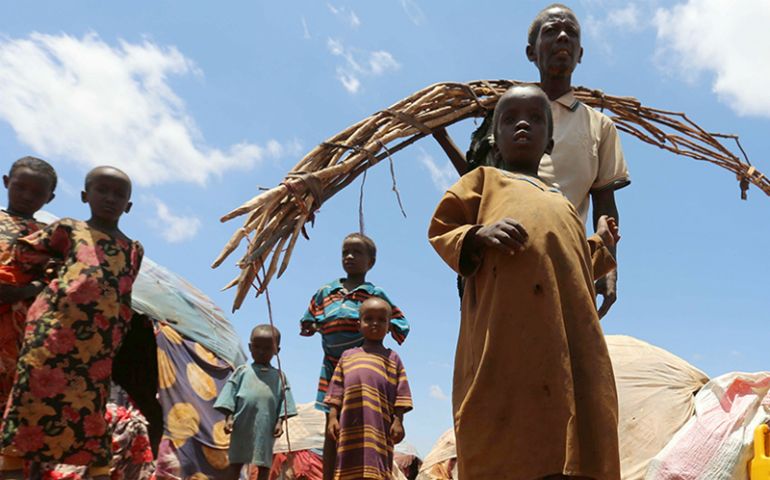 Internally displaced Somali people are seen outside their shelter after fleeing from drought-stricken regions at a makeshift camp in Baidoa, west of Somalia's capital of Mogadishu, on March 26, 2017. (Reuters/Feisal Omar)

Mogadishu — The Somalia-based Islamist militant group al-Shabab is distributing food to drought-stricken residents in southern parts of the war-torn country, as fears of impending famine grow.

The al-Qaida affiliate in East Africa is a brutal force that amputates and executes people, and flogs women in public.

But in mid-March it released photographs showing its fighters giving food relief to alleged residents of Lower Shabelle region. Media reports say the group has formed drought committees for food distributions in six regions under its control and has dug water canals for farmers.

Roman Catholic Bishop Giorgio Bertin, the apostolic administrator of Mogadishu, said he’s not surprised the group is distributing food in areas where the government has not been as responsive.

The United Nations estimated about 6.2 million people in the country were in urgent need of humanitarian aid.

Both the U.N. and the African Union were considering talks with the group, since it controls the regions hit most by the drought.

“I agree that some form of contacts should be established with al-Shabab,” Bertin said. “We must try all things to bring stability to Somalia.”

The drought has forced over 3,000 people to abandon their homes in search of food and water each day, according to Norwegian Refugee Council, an international humanitarian organization.

“The indicators are lining up dangerously with what we saw in the lead up to the 2011 famine,” said Victor Moses, the Norwegian Refugee Council’s country director in Somalia, in a media statement on March 29.

In 2011, al-Shabab attempts to distribute relief went awry, with the U.N. accusing the group of sabotaging relief food distribution after it allegedly attacked convoys, burned food and killed some aid workers.

It is not clear where the group is getting the aid, but its own network of sponsors and sympathizers are believed to be donating. Protection money and extortion from businessmen and ordinary people are also believed to be funding the relief effort.

Alms in Islam — called “zakat” — is a religious obligation in which Muslims are required to give 2.5 percent of their incomes to the needy. It’s possible some of the relief supplies may be coming through that channel. But there is also suspicion that the group is raiding food relief convoys of humanitarian groups.