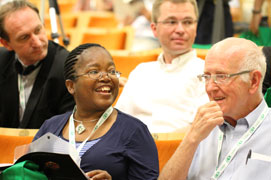 Five centuries ago, Trent launched a revolution in Catholic life. The famous council that met in this northern Italian enclave from 1545 to 1563 engineered the Counter Reformation, thus equipping Catholicism to respond to the most significant megatrend of the day: the Protestant Reformation and the dissolution of Christendom.

That, at least, was the ambition of a July 24-27 gathering of nearly 600 Catholic ethicists and moral theologians, representing four continents and 73 countries. They came together under the aegis of “Catholic Theological Ethics in the World Church,” for a conference titled “In the Currents of History: From Trent to the Future.”

Participants say the event both symbolized and advanced another Catholic revolution, this one methodological: In an era in which two-thirds of the Catholics in the world live outside Europe and North America, theology can only be done in a global key.

“Historically, there’s been a lot of nationalism deeply embedded in how we train, study and work,” said Jesuit Fr. James Keenan of Boston College, the architect of the gathering in Trent. Keenan spearheaded efforts to raise more than $700,000 to ensure that theologians from developing countries were strongly represented.

“Today, there’s a new Catholicity taking shape,” Keenan said. “We recognize that we have to be voices with others, not just for others.”

The turnout included more than 200 theologians from the developing world, almost 150 “new scholars” (meaning recent doctorate recipients), and a few of the best theological minds in the European hierarchy, including Archbishops Bruno Forte of Chieti-Vasto, Italy, and Reinhard Marx of Munich and Freising, Germany, along with Bishop Karl Golser of Bolzano-Bressanone, Italy. It offered a dramatic visual expression of how much the theological guild has changed since the Council of Trent, as half the theologians were laity and at least 200 were women.

That sense of being part of a global community became the leitmotif.

“The most important fruit of Trent is not so much a new agenda for theology, but a new way of doing theology,” said Jesuit Fr. Agbonkhianmeghe E. Orobator, a Nigerian who teaches at Hekima College Jesuit School of Theology and Institute of Peace Studies and International Relations in Nairobi, Kenya.

“It’s about having the kind of conversation that allows us to move forward as a world church, not just one small corner of the world,” said Orobator, who was on the planning committee for Trent.

The gathering built upon an earlier summit of ethicists and theologians organized by Keenan in Padua, Italy, in July 2006. Both events responded to what is arguably the most important seismic shift in Catholicism today, which is the emergence of what analysts call a “world church.”

At the dawn of the 20th century, there were 266 million Catholics in the world, concentrated in Europe and North America, so that the church’s demographic profile was roughly what it was at the time of the Council of Trent. Just a century later, there were 1.1 billion Catholics in the world, with two-thirds living in the global South. The projection is that by midcentury, three-quarters of all Catholics will reside in the Southern Hemisphere.

A shift to a global way of doing theology has at least three immediate implications, according to participants.

First, it means greater attentiveness to diversity of all sorts in the church.

“It’s very comfortable to just stay with like-minded theologians,” said Agnes Brazal of the Philippines. “But if we are to prevent increasing polarization in the church, we need to engage in what we can call an ‘intrareligious’ dialogue.”

Such a dialogue, Brazal said, must include “greater inclusion of women, theologians from the South, young scholars, and the participation of representatives from other faiths.”

The assembly included 88 female theologians. To ensure the presence of African women at Trent, scholarships were awarded to seven women doing advanced studies in theological ethics in Uganda, Kenya, Cameroon and the Democratic Republic of the Congo.

Second, a global method means a broader sense of what the issues in theology are. Jesuit Fr. Andrea Vicini, an Italian bioethicist, flagged five key themes that emerged in Trent:


Third, doing theology in a global key means that no matter what the issue may be, it’s simply impossible to think about them exclusively from one’s own national or regional perspective.

“We can’t use one narrative as the paradigm for what is going on,” Keenan said. “If I’m writing on Catholicism and citizenship, I can’t just look at the American experience. I need to hear how they’re thinking about these issues in Ukraine, and in Italy, and in Brazil.”

Brazal, however, stressed that the transition to a global method in Catholic theology is a work in progress. “Oftentimes theologians from the South are expected to provide the ‘context,’ meaning the examples, while theologians from the North are in charge of the theoretical frameworks,” she said.

A truly global theological method, Brazal said, will have to overcome that inequity.

Orobator said, “It’s no longer just the North that teaches values or norms, but it’s becoming a really global conversation.”

Going forward, Keenan said he doesn’t foresee another massive global conference in the near future. Instead, he wants to focus on building networks so that cross-border conversation becomes systematic. That likely means greater use of communications technologies and other “virtual” ways of connecting, Keenan said.