Vatican City — Russian forces in Ukraine attacked a Caritas office in Mariupol and a Catholic seminary in a small village north of Kyiv, prompting renewed calls for an end to the war and to the targeting of innocent civilians.

In a statement published on its website, Caritas Ukraine said several people "were hiding from shelling and looking for a safe haven" in its Mariupol office when a Russian tank fired on the building.

"Seven people died, including two of our accounting staff," Caritas Ukraine said. "Unfortunately, we do not have accurate information about the people who were in the office at the time, so we cannot say who was there that day." 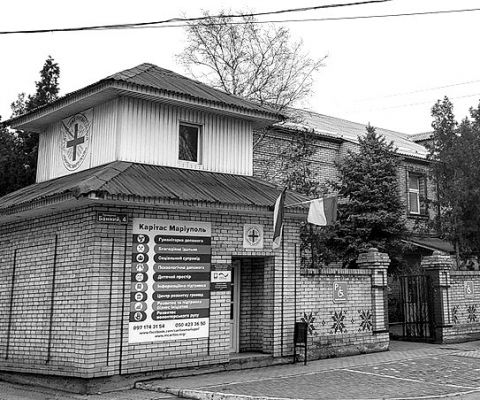 The Caritas Ukraine office in Mariupol is pictured in a screenshot. (CNS screenshot/Caritas Twitter feed)

Caritas Ukraine expressed its condolences "to the families of our colleagues" and prayed for the eternal rest of "all those killed by Russian aggression."

Although the attack was believed to have taken place March 15, "it has been known only in the past few hours" due to the "absence of communication and lack of access to the premises," Caritas Internationalis said.

Filipino Cardinal Luis Antonio Tagle, prefect of the Congregation for the Evangelization of Peoples and president of Caritas Internationalis, told Vatican News April 12 that he felt "deep sadness and shock at the news of the attack that led to the loss of lives."

"Our sadness turns into an appeal to the international community to exert every effort to bring this violence to an end, to return to dialogue, and to see a brother and sister in every person," the cardinal said.

Aloysius John, secretary-general of Caritas Internationalis, echoed Tagle's sentiments and said the news of the attack has left the "Caritas family horrified and shocked."

"We join in grief and solidarity with the suffering of the families and our colleagues of Caritas Ukraine who are living a tragedy," he said.

John also appealed for peace and said that "the 'martyrdom' in Ukraine, as Pope Francis has called it, must stop and it must stop now."

"The international community must do the impossible to stop this massacre immediately. Peace must be given a chance. Armed conflict and violence are not the solution. Human lives must be safeguarded, and human dignity upheld. Safety of the civilians must be ensured," he said.

News of the attack came several days after reports that Russian military forces also raided and ransacked a Catholic seminary in Vorzel, a village in Ukraine's Kyiv Oblast.

After Russian military retreated from the area, Bishop Vitalii Kryvytskyi of Kyiv-Zhytomyr posted several photos of the aftermath on his Facebook page April 9, including broken windows and a statue of Mary with its head broken off in an apparent desecration.

Referring to the Russian military as "barbarians," Bishop Kryvytskyi said money collected during Palm Sunday Masses in the diocese will be donated to the seminary.

"We will need the funds to renovate the premises and revive the life of the seminary for the good of the church," the bishop wrote on Facebook. "Because Ukraine, which will be rebuilt after the war, will also need spiritual guides -- priests. Pray that the Lord calls those he has chosen for this special ministry."

In an interview with Vatican News published April 11, Fr. Ruslan Mykhalkiv, rector of the seminary, said the day after Russia began its attack in late February, he, along with the seminarians as well as two nuns and five children from a nearby orphanage, fled the area.

When he returned to the seminary, Mykhalkiv said he expected some external damage from bombs that had landed in the area.

However, he told Vatican News, "when we came back, we found everything wide open and, inside, we realized that it wasn't just bombings."

The military not only took basic items, such as pots, pans, wireless routers, computers and small tools, but also priceless liturgical items, including a silver chalice used by St. John Paul II during his visit to Ukraine in 2001.

"For us it was a kind of relic, we used it on big feast days," Mykhalkiv said.

Food that was left in the pantry also was missing, but the rector said he believes the food was taken by neighboring residents which he said was "a good thing."

"There was food here and people were hungry," he explained. "Everything is closed; where could they get things?"

Mykhalkiv said that given the circumstances of the war, it was "only fair" that the neighbors took food from the seminary pantry when nobody was around.

"This is justified, but the rest, no," he said, referring to the ransacking by Russian forces.

'Every street and square will resist' Russians, says Odesa bishop