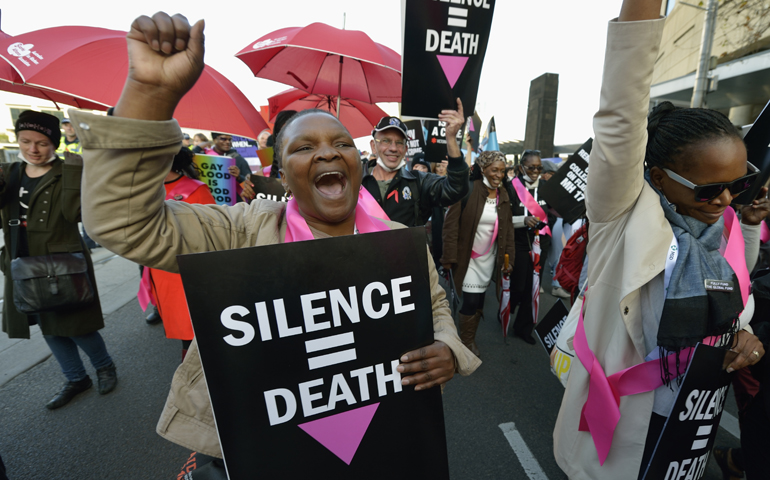 Demonstrators demand an end to stigma and discrimination against people living with HIV at a march Tuesday during the 20th International AIDS Conference in Melbourne, Australia. (CNS/Paul Jeffrey)

The U.S. government global AIDS coordinator praised faith-based groups for their action to combat AIDS but warned against an increase in stigma and discrimination against gays, especially in Africa.

"Many of us in the United States can remember the early scenes from St. Vincent's Hospital in New York City in the 1980s of desperate and dying young men being cared for by extraordinary and compassionate medical professionals and tireless nuns, when we didn't know how to treat or what to do," Deborah Birx told Catholic and interfaith groups that had gathered separately before the July 20-25 International AIDS Conference in Melbourne. "What began as an awkward relationship between the gay community and the Catholic health care system became a story of acceptance, partnership, compassion and service that became a model for communities around the country and around the world."

Although the pandemic spread to all corners of the globe, "your compassion and passion for this work continue to be the heartbeat of the response to HIV," Birx told the religious leaders July 19.

She said faith-based groups today provide 30-60 percent of the health care in countries where the United States President's Emergency Plan for AIDS Relief operates, and much of that work is carried out by Catholics.

"As the largest nongovernmental provider of health care services in the world, the Catholic church has led these efforts," she said.

While recent scientific advances suggest that the possibility of controlling the pandemic is finally within reach, Birx warned that new obstacles have emerged, particularly in Africa.

"At this very time when we could do so much together, the clouds of discrimination and judgment are gathering across the continent that needs the most support," she said.

In what she later told Catholic News Service was a reference to anti-gay legislation in Uganda, Nigeria, and several other sub-Saharan countries, Birx said there has been "an alarming rise in legally and religiously sanctioned stigma and discrimination in recent months. ... This return to finger-pointing and lack of acceptance puts us all at risk because if one of us isn't welcome, then all of us feel unwelcome."

Birx challenged the religious leaders, saying, "It is imperative that faith-based communities engage in renouncing and reducing the stigma and discrimination, hatred and violence that hamper our ability to reach and care for those in the society that are disenfranchised."

The Rev. Phumzile Mabizela, a South African Presbyterian minister who heads INERELA+, an international network of religious leaders living with or personally affected by HIV and AIDS, agreed that anti-gay legal moves had hurt the struggle against AIDS.

"The new laws and even the discussion of the new laws have promoted a lot of fear. People are scared of going to clinics or hospitals. They don't know whom to trust. With this criminalization taking place, even health workers can report them to the authorities. This makes people more vulnerable to HIV and other conditions because it becomes dangerous for them to go to health centers," Mabizela told Catholic News Service.

"We as a faith community should stand up and fight against this. It puts the lives of our most at-risk communities even more at risk. The more we discriminate against them, the more we stigmatize them, and the less likely they are to come forward for the resources they need," she said.

Yet Mabizela criticized cuts in PEPFAR funding, which Birx supervises. Less money is available, Mabizela said, and some of what is still available has been diverted from church-run programs to government health programs.

"That doesn't make sense to me. If you are against discrimination, why do you cut back on funding to the people who support the very people who are being discriminated against? Our faith communities need to stand up and challenge the politicians. We are in every corner of the continent and we have access to communities and help them deal with emergencies every week. We are the ones who tend to the people who are left out," Mabizela said.

Msgr. Robert Vitillo, a special adviser on HIV and AIDS to Caritas Internationalis, defended Catholics in today's Africa from allegations that they support discrimination.

"At face value, the legislation in some countries is supposedly to protect marriage between a man and a woman, or to prevent a more open concept of marriage which many northern countries seem to be legislating now. But many times legislation like this causes more discrimination, even violence, against sexual minorities," Vitillo told Catholic News Service.

"Yet many religious leaders do speak out against violence and discrimination."

He said while the Catechism of the Catholic Church does not condone homosexual behavior, "in no way would the Catholic church condone violence or discrimination against anyone."

Ruth Messinger, the president of American Jewish World Service, said the AIDS response must address "the violations of human rights, particularly in the developing world, that exacerbate HIV transmission and severely inhibit people's quality of life. If people are afraid to be tested or receive treatment for HIV, if they experience discrimination from health care providers, or if they simply don't have access to health services, prevention efforts can't succeed."

"Even before the bill was signed into law, LGBT people in Uganda faced enormous hurdles in accessing health care. Many service providers discriminate against them, refuse to treat them, or simply lack basic information on how to provide care. Now, the situation is worse. It has taken a major toll on stemming HIV transmission and created a national public health crisis," Messinger said.