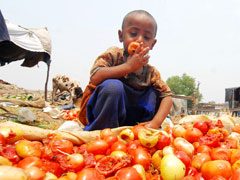 A Pakistani boy eats a discarded tomato as he sits amid trash in a slum in Lahore Aug. 15. Nearly 120 million of the total population here are forced to spend 50 to 70 percent of their incomes on food. (Xinhua Photo/Jamil Ahmed)

The phrase is used 22 times in the 11 pages of the recent "note" from the Pontifical Council for Justice and Peace urging reform of the international financial and monetary systems.

That communitarian impulse, certainly at the heart of the Gospels, has also been integral to Catholic social teaching, said John Sniegocki, associate professor of Christian ethics at Xavier University in Cincinnati. Papal documents -- Leo XIII's 1891 Rerum Novarum on capital and labor; Pius XI's 1931 Quadragesimo Anno; John XXIII's 1963 Pacem in Terris; Paul VI's 1967 Populorum Progressio; John Paul II's Centesimus Annus, a reaffirmation of Rerum Novarum on the 100th anniversary of that encyclical; and Benedict XVI's Caritas in Veritate in 2009 -- have all expressed "this vision of a unified whole and of the common good," Sniegocki said. "It is clearly a vision that works against any strong notion of unregulated markets" and it also speaks of a different relationship between politics and economics than is often the reality.

The immediate reaction to the most recent document, of course, could have been plotted out ahead of time. Any document titled "Toward Reforming the International Financial and Monetary Systems in the Context of Global Public Authority" was not going to find a soft landing amid capitalism's vanguard. Certainly not in an era of "too big to fail," international debt crises, a re-energized libertarianism and tea party-fueled distrust of government. Perhaps the only thing more countercultural than teaching sexual abstinence is to suggest we share our money and resources and set off a "transformation [that] will be made at the cost of a gradual, balanced transfer of a part of each nation's powers to a world authority and to regional authorities."

Even for the most magisterially compliant neoconservatives in the Catholic universe, magisterial authority runs off the tracks -- a point most notably made about the recent document by George Weigel, perhaps neoconservatism's highest-profile spokesman at the moment -- when it begins to delve into money and power (see below).

As has been noted repeatedly in the blogosphere discussion of the issue and elsewhere, Weigel has simply dismissed the document, released Oct. 24 by the Pontifical Council for Justice and Peace, as an insignificant "note" (a term that, translated through the Vatican lexicon, means more than one might usually invest in the term) by a "small" Vatican office. Our in-house expert, John L. Allen Jr., would respond that there really are no correspondingly "large" Vatican offices.

However the world-altering language of the document is vetted and whether anyone takes seriously its call for a rearrangement of international financial systems, what has not made the headlines is the drumbeat of common good, of a grand communal vision, of universal brotherhood, that provides the intellectual framework for the piece. What becomes clear in the reading is that this vision of the world, one from which the document makes threads back through quite a lineup of popes in the church's modern era, would arrive at radical conclusions whatever the topic.

In fact, all of the documents cited, and they are hardly an exhaustive list, have come to radical conclusions that, taken seriously on matters of economics, politics and war and peace, would more often than not turn the social order on its head. It's just that, as the current document claims, the globalized world includes globalized instantaneous communication that makes the inequities among individuals as well as nation-states highly visible. And it doesn't hurt dispersal of the message that commentators can find natural links between a Vatican document, however small the office that promulgated it, and the current Occupy campaign that's moved into the streets worldwide.

The document, after all, laments "behaviors such as selfishness, collective greed and the hoarding of goods on a mammoth scale" that have been exposed by the current global financial crisis. It also takes for granted that "no one can be content" to see some take the attitude of a predatory Hobbesian wolf toward others; nor could anyone "in good conscience accept the development of some countries to the detriment of others."

All such notions of common good and global brotherhood run counter to the American mythology of rugged individualism and "the reigning ideology that everybody looks out for themselves, and the free market is the way we do that," said Jesuit Fr. Thomas Reese, senior fellow at Woodstock Theological Center at Georgetown University in Washington.

Some Christian adherents, he said, would say that the Gospel mandate to take care of the poor is intended for individuals and that ultimately "we stand before God and have to account for whether we were good to the poor as individuals. The Catholic church has gone well beyond that. It is a societal, community responsibility to deal with these kinds of issues" in the Catholic approach, Reese said. "We don't believe that magically these things are solved through the marketplace."

That view is perhaps taken to conclusive lengths in the document when it draws on previous statements to show that successive papacies have seen the evolution of the rule of law within nation-states as precursor to a similar evolution in the global realm. Today, say the writers of the recent document, self-sufficiency of nation-states "seems anachronistic and surreal" in an era when nations "are called to go beyond the 'state of nature' which would keep states in a never-ending struggle with one another." Globalization, the writers argue, is pulling us toward a new rule of law "on the supranational level, supported by more intense and fruitful modes of collaboration."

Probably few outside of Vatican watchers and highly specialized activists would have known that a Vatican office issued a new document on financial reform if the cardinal in charge had not made one short comment at an otherwise routine news conference.

"The basic sentiment" behind the Occupy Wall Street protests is in line with Catholic social teaching and the new document on global finance issued Oct. 24 by Pontifical Council for Justice and Peace, said Cardinal Peter Turkson, council president.

"Vatican supports Occupiers," the headlines shouted and pundits took over from there and the document's content received short shrift.

What "Toward Reforming the International Financial and Monetary Systems in the Context of Global Public Authority" does say is that global financial markets need to be regulated and the "inequalities and distortions of capitalist development" must be reined in.

The document proposes a "central world bank" to regulate the "flow and system of monetary exchanges similar to the national central banks," and a tax on financial transactions, whose revenue would go to a fund to help "support the economies of the countries hit by crisis."

The document promotes establishing a "world political authority" envisioned by Popes John XXIII in 1963 and Benedict XVI in 2009. That body would have international governance on arms control, migration, food security, and environmental protection.

The current economic crisis, which has seen growing inequality between the rich and poor of the world, underlines the necessity to take concrete steps toward creating such an authority, it said.

Turkson said that the document was timed to appear before the next meeting of the leaders of the G20 nations, who discussed the global economy in Cannes, France, on Nov. 3-4.

In Mexico's drug war, church caught in the storm