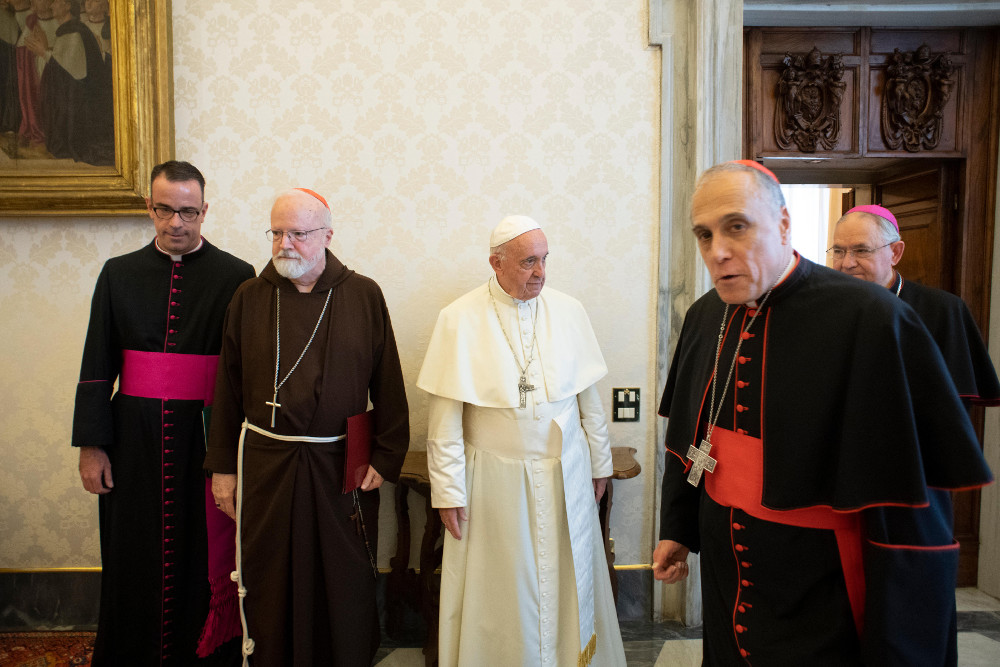 Pope Francis marked the fifth anniversary of his election in March in the midst of a firestorm over his handling of clerical sexual abuse and bishops' accountability in Chile.

He soon apologized for his slow response and invited Chilean abuse survivors to the Vatican and then all the country's bishops to meet with him in May. By mid-October, the pope had dismissed two Chilean bishops from the priesthood and accepted the resignations of seven others.

The firestorm began when Francis visited Chile and Peru in January, but the trip also included a meeting with the region's indigenous peoples, marking an important stage in the preparation for the 2019 special Synod of Bishops on the Amazon, which will focus on safeguarding creation and on the pastoral care of the people who live in the region.

Also during 2018, Francis traveled to the Geneva headquarters of the World Council of Churches to celebrate the ecumenical body's 70th anniversary; he went to Ireland for the World Meeting of Families; and he visited the Baltic nations of Lithuania, Latvia and Estonia.

He spent most of October presiding over the Synod of Bishops on young people, and during the synod, he celebrated the canonizations of St. Paul VI, St. Oscar Romero and five others.

But the sex abuse crisis dominated news coverage of the pope's year, particularly after accusations were deemed credible that former Cardinal Theodore McCarrick, retired archbishop of Washington, had abused a minor and for years had sexually harassed seminarians.

The pope accepted his resignation from the College of Cardinals, forbid him from publicly exercising priestly ministry and ordered him to "a life of prayer and penance until the accusations made against him are examined" in a canonical process.

Less than a month later, Archbishop Carlo Maria Vigano, the former nuncio to the United States, inflamed the situation by claiming that Francis had known of McCarrick's history of sexual misconduct and of supposed sanctions imposed on him, but ignored or lifted them. Vigano later admitted sanctions were never formally imposed, but he continued to insist Francis ignored warnings about McCarrick. 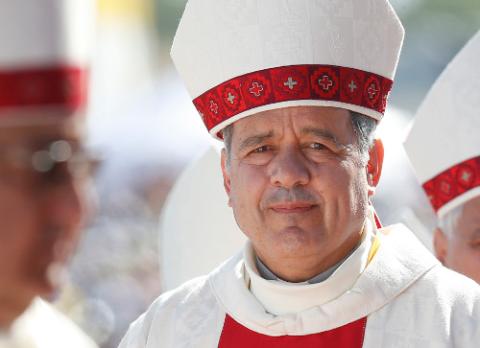 Bishop Juan Barros of Osorno, Chile, arrives in procession for Pope Francis' celebration of Mass near Temuco, Chile, Jan. 17, 2018. Francis initially defended Barros, who was accused of personally witnessing and covering up abuse, but later accepted his resignation. (CNS/Paul Haring)

In mid-September, the Vatican announced that Francis was calling the presidents of all the world's bishops' conference to a four-day meeting at the Vatican in February to address the abuse crisis and better ways to protect children.

At the synod on young people, faith and vocational discernment, some bishops — especially from Australia and the United States — insisted the abuse crisis be a topic of discussion.

Australian Archbishop Anthony Fisher of Sydney used his speech at the synod to formally apologize to young people for all the ways the Catholic Church and its members have harmed them or let them down.

In the presence of Francis, he apologized Oct. 4 "for the shameful deeds of some priests, religious and laypeople, perpetrated upon you or other young people just like you, and the terrible damage that has done."

U.S. Archbishop Charles Chaput of Philadelphia, a member of the synod council that planned the gathering, had asked Francis in August to cancel the synod and focus instead on the abuse crisis.

In his speech to the synod, he urged his fellow bishops to reaffirm strongly and clearly Catholic teaching on sex, sexuality and sexual morality.

Read this next: Year in review: US bishops take on abuse, cover-ups

"Explaining why Catholic teaching about human sexuality is true, and why it's ennobling and merciful, seems crucial to any discussion of anthropological issues," the archbishop told the synod.

While each of the 14 working groups at the synod reported having discussed the abuse scandal, in the end the final document removed a reference to "zero tolerance" of abuse that had been in the draft document.

But members retained a passage saying, "The Synod expresses gratitude to those who have had the courage to denounce the evil they have suffered: they help the church become aware of what has happened and of the need to react decisively" to ensure abuse does not continue to occur.

The synod was enlivened by the presence of three dozen young people in their 20s and 30s who addressed the assembly, participated in the small groups, spoke at press briefings and — uncommonly at a synod — cheered for some of the speeches of bishops and other observers.

In the end, the synod affirmed that the Catholic Church and all its members must get better at listening to young people, taking their questions seriously, recognizing them as full members of the church, patiently walking with them and offering guidance as they discern the best way to live their faith.

Francis' trip to the former Soviet republics of Lithuania, Latvia and Estonia in September coincided with the announcement that after decades of talks with China's communist government officials, the Vatican had reached a provisional agreement on the appointment of bishops.

Giving the government input on bishop candidates in exchange for official recognition of their office was a move widely debated. Some people, including the pope, saw it as an essential step toward ensuring the unity of Catholics in China with the universal church, while others viewed it as an unacceptable concession to the Chinese government and a betrayal of Chinese Catholics who have risked their lives for decades by refusing to allow the government to control the church.

One positive result, however, was that for the first time, two bishops from mainland China were allowed to attend a Synod of Bishops, although they had to leave early. 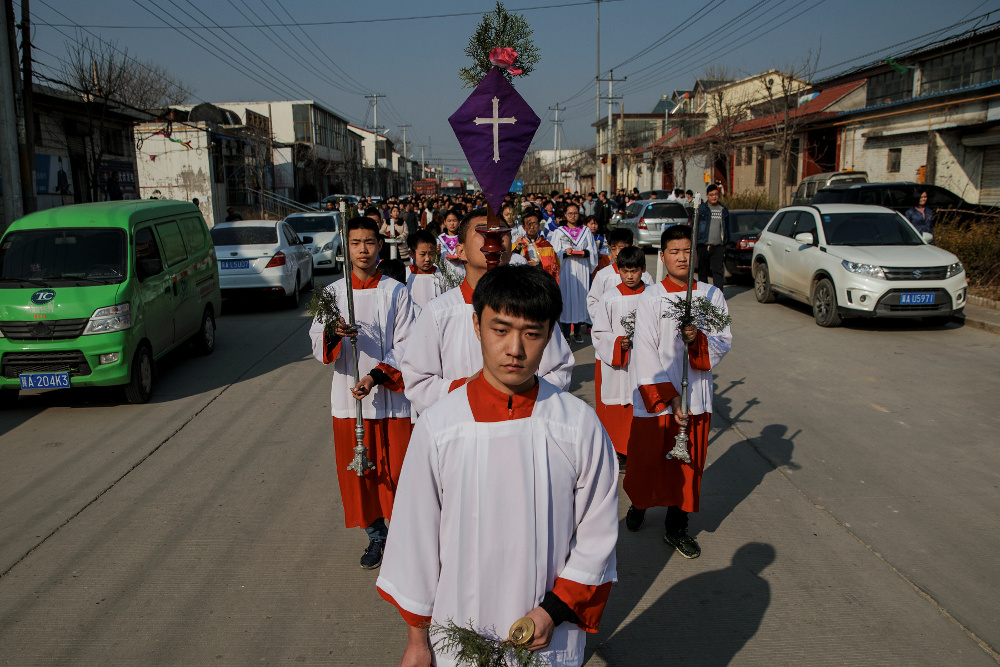 Altar servers lead a Palm Sunday procession in Youtong, in China's Hebei province, March 25. In September the Vatican announced that it had reached a provisional agreement with China regarding the appointment of bishops. (CNS/Reuters/Damir Sagolj)

Canonizing St. Paul VI and St. Oscar Romero during the synod, Francis focused on Jesus' call to leave everything behind and follow him. "Do not walk behind Jesus only when you want to, but seek him out every day," the pope said. "Do not be content to keep the commandments, to give a little alms and say a few prayers: find in him the God who always loves you; seek in Jesus the God who is the meaning of your life, the God who gives you the strength to give of yourself."

The sainthood ceremony came seven months after Francis published his third apostolic exhortation, Gaudete et Exsultate ("Rejoice and Be Glad") on how every person is called to holiness.

"We are all called to be holy by living our lives with love and by bearing witness in everything we do, wherever we find ourselves," he said, citing the example of "saints next door," as seen, for example, in "parents who raise their children with immense love, in those men and women who work hard to support their families, in the sick, in elderly religious who never lose their smile."