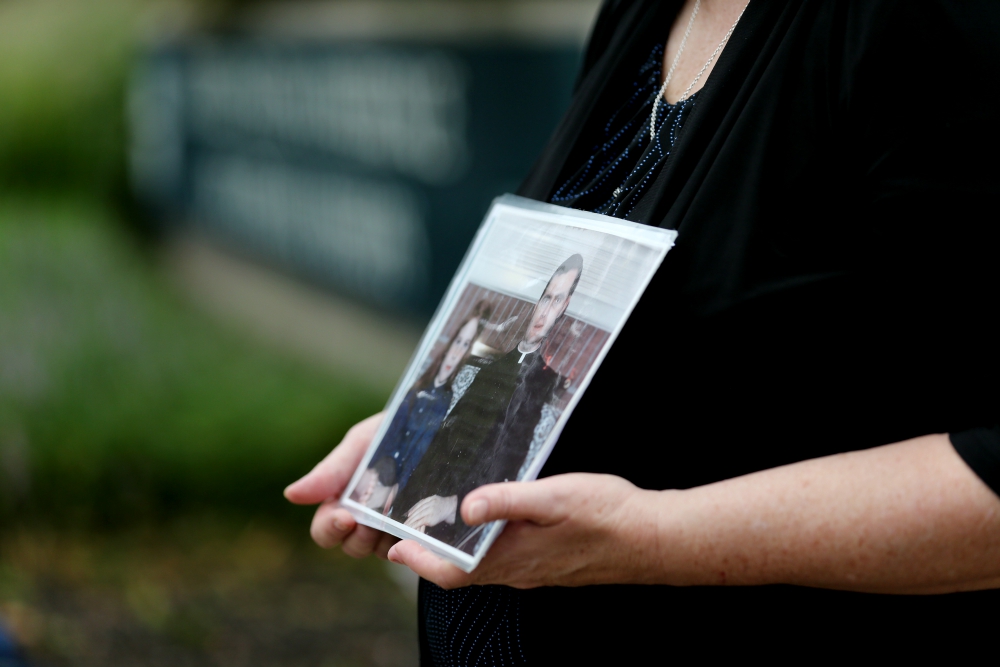 Becky Ianni, Washington and Virginia director of the Survivors Network of those Abused by Priests, holds a photo of herself as a child with a priest Aug. 21 outside the headquarters of U.S. Conference of Catholic Bishops in Washington. Ianni says she was abused by the priest in the photo. (CNS/Bob Roller)

In the Catholic world, it is difficult to talk about anything other than the church's self-inflicted crisis. That is not to say I have anything to add that hasn't been stated more intelligently or eloquently by others. What has been said bears repeating, though, again and again until the church has learned the lessons it evidently has yet to grasp.

The crimes outlined in the Pennsylvania grand jury report are horrifying in a scope and kind that institutional apologies do not sufficiently confront. Announcements by more attorneys general of investigations into their states' dioceses should be welcome news to all. The church clearly needs outside help if it has any hope of reforming, and given the fat checks to lobbyists that defend the accused and thwart efforts to deliver justice to victims, one could be forgiven for doubting the hierarchy's stomach for change.

That former Cardinal Theodore McCarrick could, until this year, maintain his standing as a popular and influential leader despite supposedly widespread knowledge of his predations is infuriating. Whatever Archbishop Carlo Maria Viganò's biases and own alleged culpability in covering up sexual crimes, Viganò's accusations against Pope Francis call for a response.

As countless commentators opine about the forces to blame for all this, many Catholics are wrestling with a more fundamental question: to stay or to go. At what point does membership in this body make one complicit in the worst it has to offer? How can one justify tithing to an organization that has used that money to protect the guilty and silence the innocent? Why would one instruct their children in a tradition that has been twisted to cover up heinous criminal acts?

Throughout this seemingly unending nightmare, I have been moved both by accounts of those who feel compelled to remain within the faith as well as those who feel they have no choice but to leave. In addition to victims' brave accounts, ordinary laypersons' voices provide an indispensable window into how the sins of shepherds have ravaged their flock.

I hope priests and bishops are sincerely listening. I hope whenever they encourage parishioners to stay in the church, they know that those who walk away do not do so lightly, that they might see themselves not as renouncing their faith so much as answering their consciences.

As I have thought of my own calling and considered what this moment demands from me, I keep returning to the concept of powerlessness. People have rightly pointed out that the many layers of abuse in this scandal include the abuse of power. Priests used the power of their prestige to prey on the vulnerable, and bishops wielded the same tool to keep these offenses under wraps.

I myself have never felt particularly powerless as a Catholic. Our religion maintains considerable sway in the United States, and as a man, I have always implicitly known that the church's design set many possible paths before me. Several good priests have approached me over the years and asked if I had ever considered joining their ranks. While I like to believe this is because I displayed qualities of a worthy pastor, I know many holier and more pastoral women who are barred from even contemplating that idea.

But in the wake of McCarrick and Pennsylvania, it is hard not to feel powerless. I can stop going to Mass, join another religion, withhold money from the collection basket, write a letter to my diocese, or fervently pray that we respond as victims deserve, but will it make any difference? Those at the top of the chain of command are not required to reply to me. As a priest said in response to a parent seeking specifics in how the church should adapt, "You and I have no influence."

New as these feelings may be to me, they are all too common and far more painful for others. Start with victims of rape and sexual abuse, who shouldered trauma that their families sometimes did not even know about. Consider women, including nuns whose heroic work serving the poor has been scrutinized by church leaders. Think of gay people, whose sexual orientation has been unfairly conflated with priests' and bishops' crimes.

One of the great incongruities of Christianity is its reverence for the powerless. We hail the power of one who cast his lot with those who had no power of their own. Jesus "did not regard equality with God something to be grasped," says St. Paul in his letter to the Philippians. In Isaiah 53, he is described as being "spurned and avoided by men, a man of suffering, knowing pain," and in Matthew 25, he stresses the special status of the hungry, thirsty, naked, sick and imprisoned, indicating that they will ultimately be the masters of the rest of our fate.

Some recommendations meant to address the sexual abuse crisis involve bishops and priests voluntarily relinquishing their power. This seems appropriate and in keeping with the humble station Jesus embraced. Church leaders would certainly have models to turn to — yes, Jesus, but also those aforementioned people who have suffered for so long.

Though such a shift might lead some of us laypeople — and hopefully victims of abuse — to greater authority, we, too, can learn from those who have been most marginalized. They know Golgotha in a way no one ever should, and their courage is without parallel.

I still do not know what it means to be a Catholic in this present moment, to faithfully live out our creed. But as I contemplate the question, these are the people I look to. It was in betraying them that the church arrived at this dark hour and in turning to them that we might be saved.