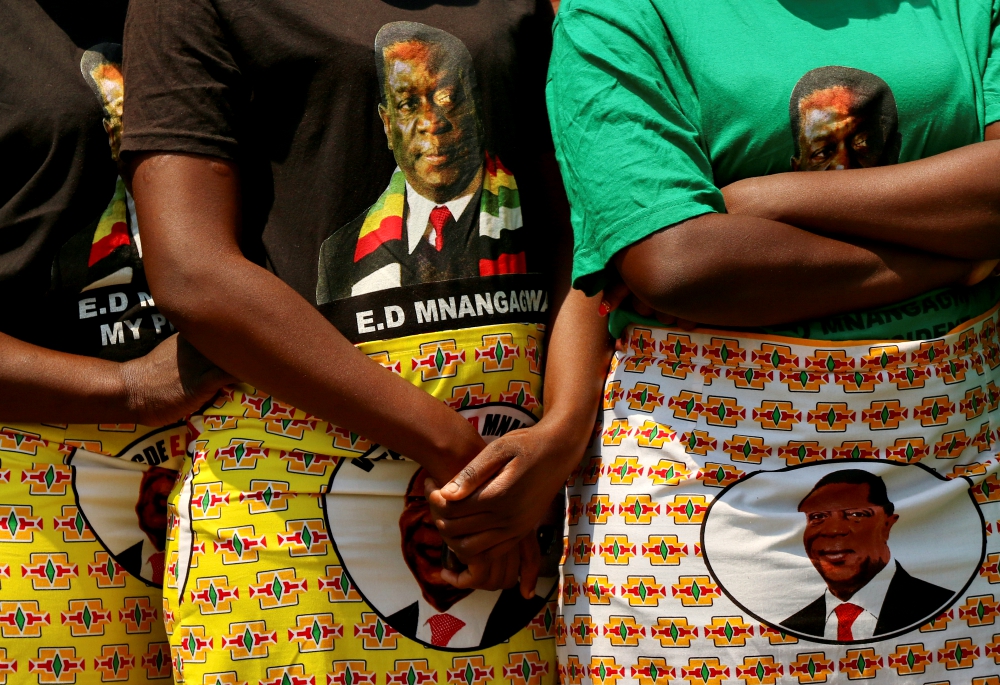 Supporters of Zimbabwe President Emmerson Mnangagwa are seen during the opening of a new Parliament building in Harare Oct. 1. (Newscom/Reuters/Philimon Bulawayo)

Christian leaders in Zimbabwe have called for a seven-year political sabbath under which there will be no political contestation, an idea that has sparked debate.

The call by Catholic and other church leaders in Zimbabwe comes against the backdrop of a worsening economic crisis, characterized by rising inflation that is pushing up prices beyond the reach of ordinary citizens. Zimbabweans also have to contend with austerity measures that have seen the government approve massive tariff increases for electricity and fuel. In addition, drought conditions and mismanagement by the government mean that a bigger portion of the populace requires food assistance.

"The current deteriorating economic crisis which is characterized by systemic corruption, shortages of fuel, prices going out of control and collapse of the health sector needs to be built from the ground with everyone's support," the church leaders said.

The Oct. 7 joint statement was issued by the Zimbabwe Heads of Christian Denominations, a group made up of the Zimbabwe Catholic Bishops' Conference, the Zimbabwe Council of Churches, the Evangelical Fellowship of Zimbabwe, and the Union for the Development of Apostolic Churches in Zimbabwe.

The country has tipped into a political crisis, with church leaders worried that the main political actors are only prioritizing the battle for power and legitimacy. President Emmerson Mnangagwa has said his door is open for political dialogue but the main opposition under Nelson Chamisa says Mnangagwa is an illegitimate leader, precipitating a standoff.

The political tensions have continued to bubble over, with Chamisa's Movement for Democratic Change (MDC) party walking out of Parliament when Mnangagwa delivered his state of the nation address and officially opened the House of Assembly Oct. 1. The next elections in Zimbabwe are due in 2023 and the two main political parties have been squaring off in by-elections in the past few months.

Apart from the political crisis, Zimbabweans have been unable to access public health care at national centers as public doctors have embarked on a strike, now for more than a month, against poor remuneration. This has seen citizens who cannot afford private health care switching to Catholic health centers across the country.

It is against this backdrop that Zimbabwean church leaders have called for a cooling-off period under a seven-year political sabbath to allow for the tensions to ease. The seven-year sabbath on political contestation in Zimbabwe will also allow for renewed focus on fixing the economy in Zimbabwe.

"The nation will need to take a bold decision to address the root causes of our national challenges that have a very long history and will not be fully resolved by one entity," said the Zimbabwean church leaders. 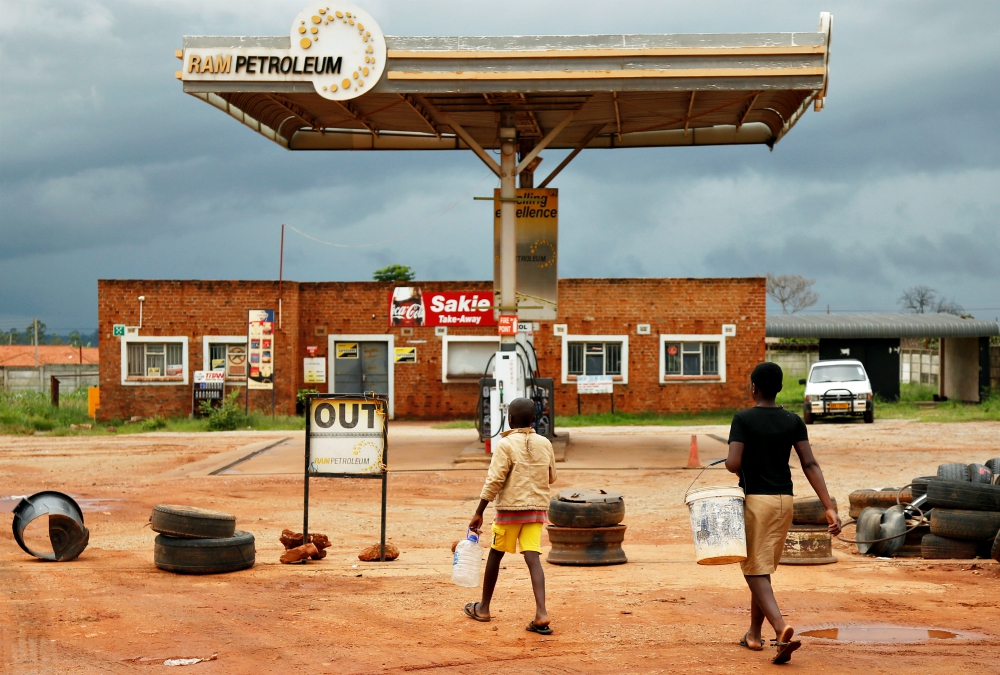 They added: "In this light we are calling the nation to SABBATH on all political contestation for a period of seven years to allow for the rebuilding of trust and confidence, reset our politics and chart a shared way forward towards a comprehensive economic recovery path in a non-competitive political environment."

The church leaders describe the idea of the sabbath as having a deep theological theme in the Bible and in church tradition. They say it is based on God's command to his people to set aside the seventh day for a rest, while the notion of seven years is also considered as constituting jubilee seasons. During jubilee seasons, "land would be left fallow so that it could recover its nutrients" while debts would be forgiven, with new relationships built and God blessing his people.

"Zimbabwe reaches her Jubilee year in 2029. The nation could use the coming period to usher in a true Jubilee for the nation by removing all political contestation from the land and focus the period on healing past wounds, recover the economy, and build a new political culture of cooperation focused on nation-building," the church leaders said in their call.

Fr. Frederick Chiromba, general secretary of the Zimbabwe Catholic Bishops' Conference, said at a press briefing in Harare that church leaders had engaged political leaders over the idea of freezing political competition in Zimbabwe. He said the church leaders were now "expecting responses from both parties" regarding their proposed initiative.

"We have gone to the two main political parties; first of all, we met the leader of the opposition party, Advocate Nelson Chamisa, to present to him a summary of this message. After meeting him, we then went to the president's office, where we presented our initiative," said Chiromba.

In the initiative, the Zimbabwe Heads of Christian Denominations highlights that the country remains entrapped in a political crisis, with "the current political paralysis and logjam characterized by the failure of the ruling party and the main opposition party to find a workable collaborative mode."

"The fact that the two main political parties remain stuck in the post-election mode and will soon embark on a new election mode means that Zimbabwe is unlikely to realize any meaningful engagement between these parties towards a shared constitutional alignment agenda," they said.

Chiromba also explained that shifting focus from electioneering all the time, as exhibited by the 2018 post-election contest over the legitimacy of Mnangagwa's victory, "doesn't give enough room for the nation to develop" and address the lingering political, economic and social crisis.

"We need a sabbath to enable national cohesion before we enter a political contest," said Chiromba.

Catholic and other church leaders in Zimbabwe have been nudging Mnangagwa and Chamisa to dialogue and find a solution to the national issues.

This has been interpreted to mean a move toward a government of national unity, which Zimbabwe has previously had when the late former leader, Robert Mugabe, joined hands with the late former opposition leader, Morgan Tsvangirai, under a Global Political Agreement that saw the two leaders and their respective parties share power starting in 2009.

Chiromba explained that the call for a political sabbath does not mean that the church's dialogue initiative has failed to bring the two leaders together. "We have engaged both sides and the leaders are in favor of having this dialogue, only that it hasn't happened at this time but we keep trying. With this sabbath arrangement we hope it will make the dialogue even easier," he said.

However, Obert Mpofu, secretary for administration in Mnangagwa's ruling ZANU PF party, told NCR: "We will be guided by the constitution. The church is entitled to views like anyone else."

Chamisa's opposition MDC party insisted that it was key to address the "crisis of political legitimacy" amid continued feelings within the opposition that the 2018 election was manipulated in favor of Mnangagwa.

"As the MDC, we have been very clear in our position concerning the future of this country and the way forward, that unless and until we resolve the political issues, the economy is going to be affected. Every interested key stakeholder in the country must look for a long-lasting solution, because the people are suffering," said Daniel Molokele, spokesperson for the party.

A version of this story appeared in the Nov 1-14, 2019 print issue under the headline: Zimbabwe church leaders call for seven-year political sabbath.