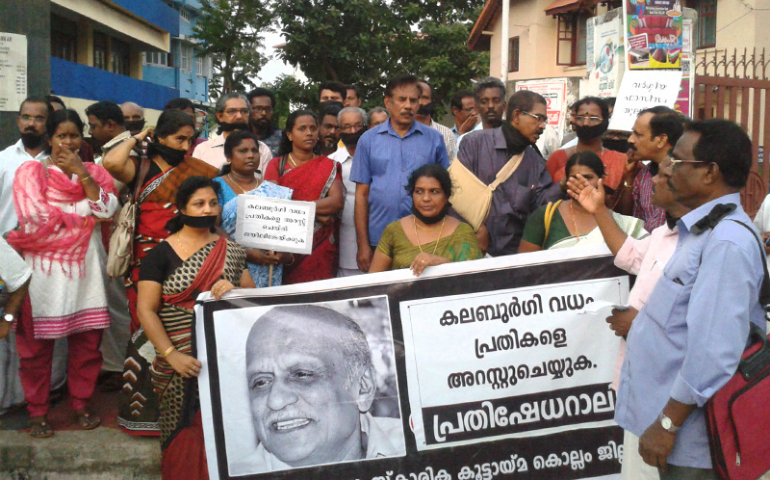 People demonstrate on Sept. 3, 2015, in Kollam, India, against the slaying of author M.M. Kalburgi. (Creative Commons)

Atheist activist H Farook was killed in the South Indian city of Coimbatore last month, the latest in a string of killings of people who reject formal religion.

The 31-year-old Farook abandoned Islam, the religion of his birth, and ran an atheism WhatsApp group with 400 members. Fifteen days before he was slain, he posted a picture of his child on Facebook holding a placard that read, “No God, no God, No God.”

A banned radical group may be behind the killing, according to police.

Farook’s death follows the 2013 killing of the anti-superstition activist Narendra Dabholkar, who opposed exploitative ritual and promoted rational humanism (a member of the right-wing Hindu group the Sanathan Sanstha was arrested but rejects the charges).

And in 2015, M.M. Kalburgi, a writer who criticized idol worship, was killed. (A member of the Hindu group the Bajrang Dal later tweeted: “Mock Hinduism and die a dog’s death … ”)

Last year in northern India, a daylong meeting at the ashram of atheist leader Swami Balendu was called off after some Hindu and Muslim groups protested.

Several Indian organizations have been fighting against exploitative rituals, black magic and religious frauds, and many have been threatened or attacked for their efforts.

Nearly 50 such groups describing themselves variously as “rationalist, atheist, skeptic, secularist and science organizations” are part of the Federation of Indian Rationalist Associations, which describes itself as “committed to the development of scientific temper and humanism in India.”

But India has not been a hospitable place for nonreligious people who publicly admit to it. Neither has neighboring Bangladesh, a Muslim country, where a spate of secularist writers were killed in recent years, or Pakistan, India’s neighbor to the west.

“You just can’t criticize religion,” said Soorya Sriram, 26, who identifies as atheist and is an administrative member of the Indian Atheists’ Facebook page. “People say talk to our hands or to our sticks.”

The page receives about five or six threats a week, and Sriram said the threatening behavior peaks during festivals, or elections.

“Getting threats is routine,” said Avinash Patil, state executive president of Maharashtra Andhashraddha Nirmoolan Samiti, the anti-superstition organization that Dabholkar was part of. “But we will not be frightened. We need to keep fighting.”

Rejecting religion in India can come in a variety of forms: rejecting God outright, or fighting particular practices and rituals of organized religion. Such people identify as humanists, freethinkers, social reformers or rationalists.

India is a secular democracy with 1.2 billion people. The majority (80 percent) are Hindu, but the country has significant Muslim and Christian minorities.

In the 2011 census, only 33,000 people chose to self-identify as “atheists.” A separate category of “religion not stated” included 2.9 million people. It is also possible that count is low because of improper counting or because people simply didn’t know of the atheist option or are afraid of publicly declaring it.

As political Hinduism has strengthened in recent years, liberals have decried increasing intolerance and the shrinking space for dissent.

Though religious groups launching protests or humanists receiving threats is in itself not new, the 2014 general election victory of the BJP, the Hindu right-wing party, strengthened the far right.

“The environment for freethinking and questioning is decreasing,” said Patil. “Parties calling themselves secular have hardly been secular and this is why the space for fundamentalists has strengthened.”

Deepak Sarma, professor of religious studies at Case Western Reserve University in Cleveland, said privileging of Hinduism makes it difficult for others.

“The attempt at establishing Hinduism as the exclusive, only and native religious tradition of India by the BJP has meant that people who speak against religion, religious beliefs, or identity as secular rationalists, or who identify with Islam or Christianity are indeed under threat,” he said, via email.

But for many nonreligious Indians, the lack of public recognition for people of no faith is jarring.

“We feel suffocated and are not being respected on our own terms,” added DV Ramakrishna Rao, who identifies as nonreligious. “We also have our democratic right of expression.”

In March, Rao filed a public interest lawsuit in the high court of Hyderabad, seeking the option of identifying as nonreligious on government and other official forms.

He floated an online petition after he found out that his daughter’s school examination form had options for identifying with each of the major Indian religions — Hinduism, Islam, Christianity, Sikhism, Buddhism and Jainism — and an additional seventh option of “other,” but no separate category for nonbelievers.

Last week the high court sought responses from the state and central governments on Rao’s petition.

“A person has the right to be recognized in the way they want,” said D Suresh Kumar, Rao’s advocate. “India has a long legacy of nonreligious movements.”

Scholars have pointed out that Hinduism itself allows for multiple contesting views, including skeptical traditions.

“India has a long tradition to regard and revere the nonreligious or nonbelievers and thinkers and leaders such as the Buddha, Mahavira and Charvaka,” said Pankaj Jain, an associate professor at the University of North Texas, referring to some Indian-born ethical traditions.

“All of these figures rejected any belief in a god or in any religious text. Yet, they were celebrated as founders of major philosophical schools of Buddhism, Jainism and Charvaka.” He added that there was no evidence of Hindus being persecuted for rejecting god or holy texts.