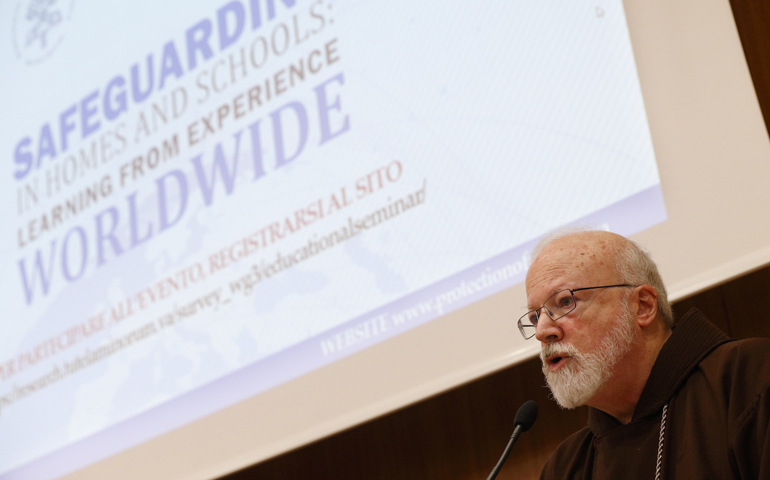 Cardinal Sean O'Malley speaks during a seminar on safeguarding children at the Pontifical Gregorian University in Rome March 23. (CNS/Paul Haring)

In the midst of a month in which the effectiveness of Pope Francis' measures to fight clergy sexual abuse has come into question, Boston Cardinal Sean O'Malley pledged Thursday that the pontiff is still "thoroughly committed to rooting out the scourge of sex abuse."

O'Malley, the head of Francis' Pontifical Commission for the Protection of Minors, told participants of an education seminar hosted by the group that "there is simply no justification in our day for failures to enact concrete safeguarding standards for our children."

"Let there be no doubts: no other topic is more important for the life of the church," said the cardinal. "If the church is not committed to child protection, our efforts at evangelization will be to no effect; we will lose the trust of our people and gain the opprobrium of the world."

The pontifical commission, created by Francis in 2014, was hosting an educational seminar Thursday, March 23, at the Pontifical Gregorian University, presenting different perspectives on safeguarding children, by advocates from Argentina, Australia, Colombia, Italy, Mexico and the United States.

The event comes just three weeks after one of the commission's members, abuse survivor Marie Collins, resigned from the group March 1. In an article for NCR that day, Collins said she was resigning due to frustration with Vatican officials' reluctance to cooperate with the commission's work to protect children.

Collins specifically highlighted the Vatican's failure to implement two measures the pope had approved on the commission's recommendation: that there be creation of a new tribunal to judge bishops accused of acting inappropriately on sexual abuse, and that all Vatican offices respond to letters sent by abuse survivors.

Collins, an Irishwoman, had been the last abuse survivor to serve in an active role on the commission. Englishman Peter Saunders, the only other survivor, was placed on leave from the group in February 2016.

In his remarks opening Thursday's event, O'Malley appeared to acknowledge that his commission needs to re-evaluate how it can function without having an abuse survivor among its ranks. The cardinal said that issue would be something the group would consider at its next meeting, being held this weekend in Rome, March 24-26.

"All the best programs and best practices will be to no avail if we fail to put the victims and survivors of sexual abuse first," said O'Malley.

"Our commission has adopted 'the priority principle' — victims first — something that will be a central topic during our plenary assembly this week," he continued. "How can victim/survivors continue to have a powerful voice in our work and help to guide us?"

While O'Malley pledged a conversation about giving voice to survivors in the commission's work, it has appeared several times in recent days that someone within his group has been working to stifle the voice of survivor Collins. The person has been quoted in several news reports under a cloak of anonymity.

In one example, a source cited as "familiar with the situation" told Catholic News Service March 16 that the pope's order to implement a new tribunal to judge bishops was not a "papal fiat" to put the tribunal together but a "green light" to flesh out new procedures.

In another example, a "Vatican source" told National Catholic Register March 22 that survivors who write to the Vatican should receive a response from their local bishops, not Vatican offices.

The claim in the first example belies the statement the Vatican made in June 2015 announcing the new tribunal, which said plainly that the pope had ordered the tribunal established and personnel appointed to it.

The claim in the second example contradicts Collins' March 1 letter, which stated: "Last year at [the commission's] request, the pope instructed all departments in the Vatican to ensure all correspondence from victims/survivors receives a response."

However, Cardinal Gerhard Müller, prefect of the Congregation for the Doctrine of the Faith, the office that judges case of abuse by clergy, said in an interview with Italy's Corriere della Sera newspaper that his office refers letters from victims to the local bishop out of "respect [for] the legitimate principle of diocesan autonomy and subsidiarity."

Collins' herself expressed frustration at the way her interlocutor has refused to give his or her name, tweeting March 23: "Hiding behind anonymity 'Vatican source' has worked hard over past weeks to counter my statements. Something to say? put your name to it."

Hiding behind anonymity 'Vatican source" has worked hard over past weeks to counter my statements. Something to say? put your name to it.

The commission's event Thursday was attended by the heads of several Vatican offices, including Cardinals Marc Ouellet, Kevin Farrell, João Bráz de Aviz and Peter Turkson. Among the other speakers was Kathleen McCormack, an Australian who leads the commission's working group on education of families and communities.

"We really are all here today because we have a problem in our church," said McCormack, before outlining what she called five "essential strategies" for preventing abuse: personnel screening, ongoing formation, community education, creation of reporting structures, and information-sharing between the church and wider society.

The last item, said McCormack, would "help break the secrecy and silence in the church."

Francis Sullivan, an Australian who heads the Truth, Justice and Healing Council, told those present that clergy sexual abuse "has broken the heart of the Catholic Church."

"We have never really appreciated that the decisions our leaders made in order to facilitate and cover up actually broke the heart of what it meant to be Catholic," he said. "And we need to go back and fully confront that."