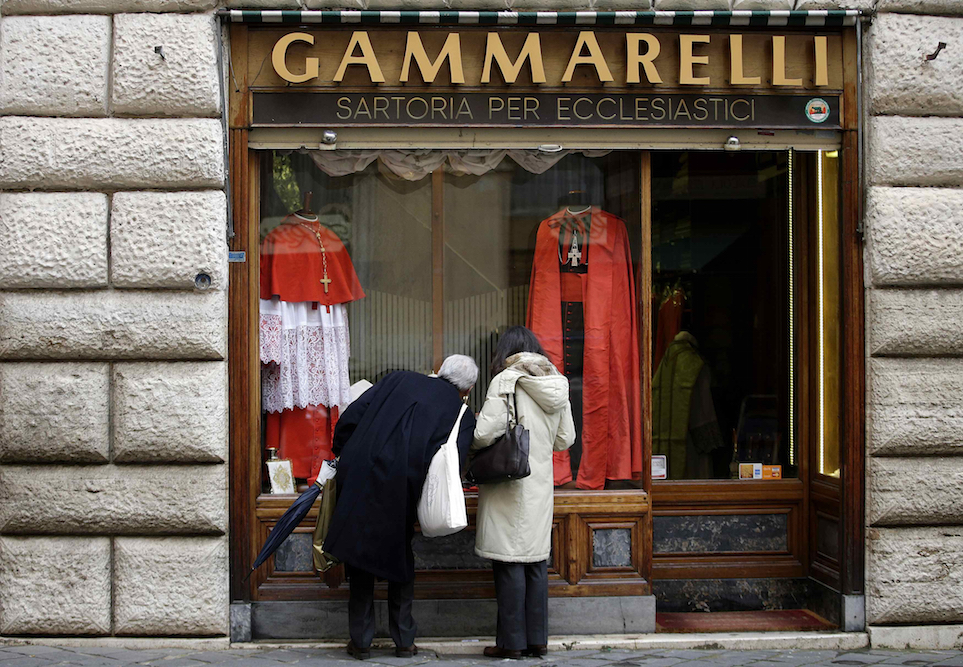 People looking at cardinals' vestments on display in the window of the Gammarelli tailor shop in Rome, 2014. (CNS/ Reuters/Max Rossi)

Deep inside Frédéric Martel's earth-shaking exposé of clerical corruption, I came across the maxim attributed to Oscar Wilde, "Everything in the world is about sex, except sex. Sex is about power." In the Closet of the Vatican takes its reader deep inside the corridors of the Vatican as well as the apartments of curial cardinals and archbishops, where many, if not most, of the prelates Martel interviews lead lives of luxurious duplicity.

It's the duplicity and hypocrisy of these prelates that fire the drive of Martel and his researchers to bring into the light the sad and shocking behaviors of many of our church's leaders. In doing so, I kept thinking how everything is about sex, except sex and that sex is about power. What Martel does, quite masterfully, is to connect the dots that reveal an ecclesial system in profound decay.

Here we discover how eros, especially homosexual eros, ambition, power, status and wealth have coalesced to fashion the corrosive clericalism that Pope Francis has decried and condemned. Francis understands there is something profoundly unreal at the root of clericalism, which Martel describes as "an oligarchic and condescending system devoted to the preservation of its own power regardless of the price." What is unreal for Francis is a rigidity posing as orthodoxy. "Behind the rigidity, there is always something hidden, in many cases a double life." In the Closet of the Vatican examines in impressive detail the double lives led by many of the church's prelates.

Martel's research leads him to identify 12 rules that are commonplace inside the Vatican and beyond. Rule 2 states, "The more vehemently opposed a cleric is to gays, the stronger his homophobic obsession, the more likely it is that he is insincere and that his vehemence conceals something." And what it conceals is his own homosexuality or confusion about his sexual orientation. That there are many gay bishops and cardinals walking the halls of the Vatican isn't surprising, but Martel believes many, perhaps most, of these gay prelates are "practicing", i.e., sexually active — leading double lives. Some frequent Rome's male prostitutes, others have entered into intimate relationships with their male assistants or secretaries. Still others hit on the Swiss Guard. It's the hypocrisy of these prelates that galls Martel. They present themselves as sentinels of orthodoxy, staunchly defending celibacy for priests, condemning homosexual unions and especially homosexual marriage, while leading lives that belie their public statements. These are not men struggling to be chaste. On the contrary, they appear to this reviewer to be quite at ease with their double lives. They have mastered the games of the Vatican court. What puts these prelates at considerable dis-ease, however, is the realization that Francis is on to their games — that the carnival may soon be over.

Related: Excerpt: 'In the Closet of the Vatican'

Martel reports that perhaps as many as 80 percent of Vatican officials are gay — not all practicing of course. If even half of our prelates are gay, we might conclude that many seminary faculty are gay, and that in turn suggests that the duplicity and hypocrisy at the heart of the church's deep troubles begin long before ordination to the priesthood. A gay seminarian must remain in the closet but discovers sooner or later that most of his fellow seminarians are keeping him company. Slowly a reality emerges. A gay seminarian is the preferred seminarian. A former seminarian Martel interviews believes "the Church has always preferred gay priests to heterosexual priests. … While the celibacy of priests remains in place, a gay priest will always receive a better welcome in the Church than a straight priest." Instead of speaking of a gay subculture in our seminaries, it is more accurate to speak of a straight subculture. The heterosexual seminarian will feel off balance, slightly out of place. The seminarians Martel interviewed led him to believe that, "A heterosexual cannot feel completely at ease in a Catholic seminary, because — and I'm quoting the expressions they used — of 'the looks', the 'special friendships', the 'bromances', the 'boy-chasing,' … and 'generalized homoerotic atmosphere' that emanates from it." 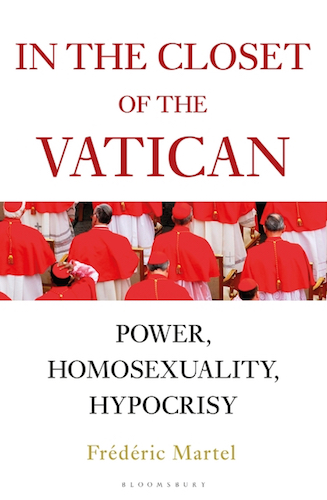 So the gay networks Martel discovers in the upper ranks of the church are shaped and forged in Catholic seminaries. And these networks sustain the duplicity and hypocrisy that eat away at the integrity and credibility of the church.

Martel accomplished his objective — revealing the duplicity and hypocrisy of the hierarchical church. His call for honesty and integrity can be joined by all factions of our divided, polarized church. And he shouldn't be faulted for not acknowledging the goodness, integrity and self-giving service evident in the lives of many Vatican officials and prelates stationed around the world. Still, in the midst of corruption, lust and greed, we need to acknowledge the grace and holiness evident in the lives of many who serve the church.

Two questions surfaced as I read this extraordinary book: Would its focus on the active homosexuality of many high-profile conservative prelates offer fodder to the far-right Catholics who believe a pastoral approach to gays and lesbians is weakening the church's moral integrity? I don't think so. The very prelates whose duplicity and hypocrisy are revealed are often the very heroes of the skewed orthodoxy championed by the far right. To exploit the wide range of homosexual behavior in In the Closet of the Vatican would be to box these critics into a corner difficult to escape. My second question has to do with the book's backstory: Where did the funds for the extensive research, travel, meals, hotels, etc. required for this publication come from? Did the eight publishers provide the advance? And who paid for the cadre of attorneys who gave the green light to the publishing bosses?

Without question, In the Closet of the Vatican is a truly remarkable publishing event. The book is being simultaneously published in eight languages and 20 countries following almost 1,500 interviews. Martel's notes and bibliography — 300 pages' worth — are available on the author's website. My one reservation, and a serious one, is the lack of an index.

Step into the Vatican's closet. The read will leave you breathless.

Editor's note: Click here to sign up to receive an email every time NCR publishes a book review (or other articles of your choice).