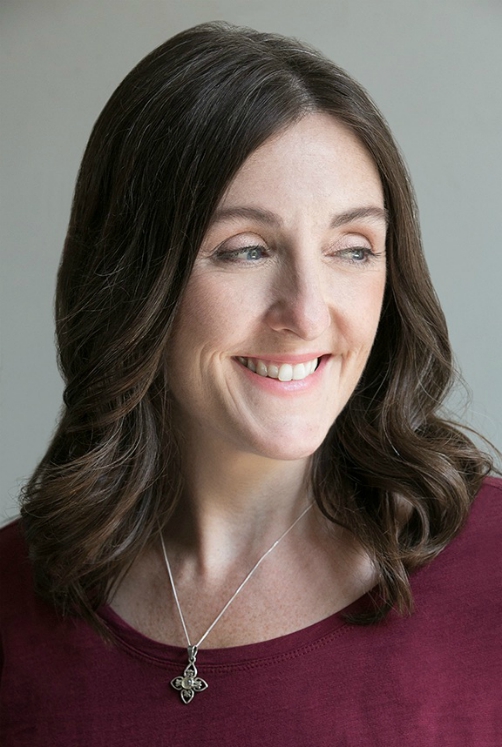 Kathleen Donohoe, author of "Ghosts of the Missing" (Beowulf Sheehan) 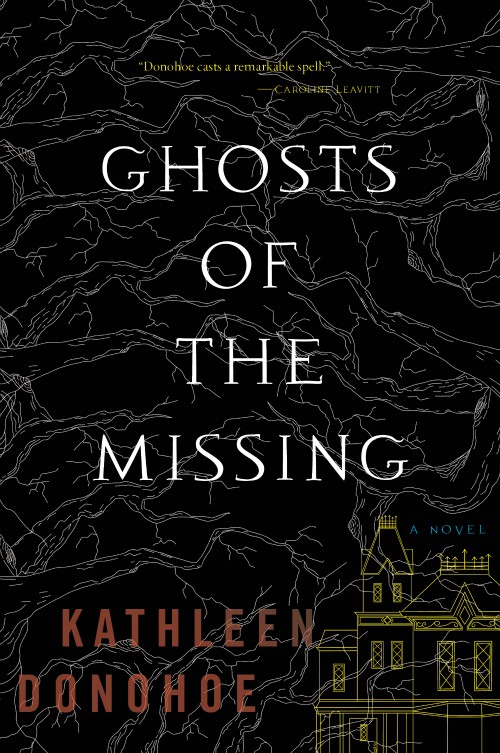 There's a park at the intersection of Manhattan's Greenwich Avenue and 12th Street that The New Yorker magazine once described as "a small parcel of land shaped like a pizza slice, with Seventh Avenue as the crust." It is the site of New York City's AIDS Memorial Park at St. Vincent's Triangle. The name comes from the Catholic medical center that opened in 1849 and served the neighborhood for over a century and a half, before finally closing in 2010.

In the 1980s, St. Vincent's Hospital became an unlikely treatment center, and haven, for a community suddenly ravaged by a mysterious disease that would later be called AIDS.

"Almost from the beginning, the Catholic Church had mounted a response to the crisis through Catholic Charities and hospitals, like St. Vincent's in the Village, where the sick and dying were cared for," writes Kathleen Donohoe, in her ambitious, centuries-spanning new novel Ghosts of the Missing.

The book begins as both an immigrant saga and missing persons mystery. As it unfolds, though, Ghosts of the Missing becomes a broader portrait of an extended family and community, beginning with immigrants in the 1850s, and, later, featuring a pair of Catholic priests forced to confront what Donohoe terms the "crisis days" of the AIDS epidemic in mid-1980s Manhattan.

"My son was actually born at St. Vincent's," Donohoe told NCR during a recent interview at a Brooklyn café on a chilly afternoon. "He was born in February 2010, and then it closed a few months later." 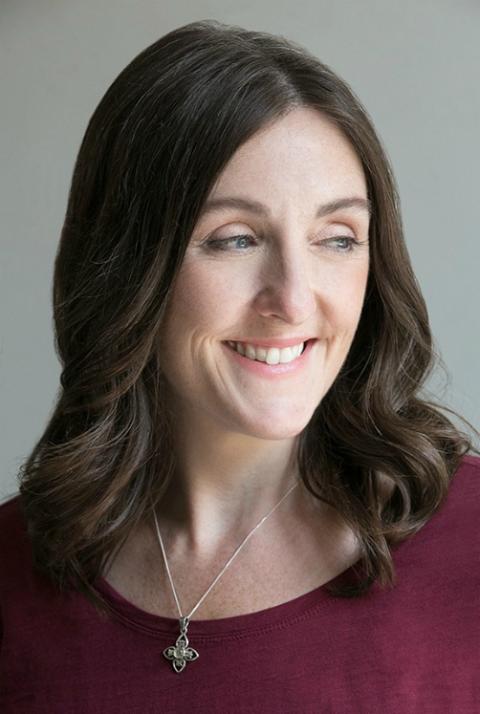 Kathleen Donohoe, author of "Ghosts of the Missing" (Beowulf Sheehan)

Donohoe grew up across the river from St. Vincent's and Manhattan, in Brooklyn, where she still lives. It was the setting of her first novel, 2016's Ashes of a Fiery Weather, an autobiographical saga about several generations of an Irish American firefighting clan. Donohoe's father and several uncles were members of "New York's Bravest," which lost 343 members on Sept. 11, 2001.

Her new novel also spans the years, but is in many ways a departure from Ashes.

"I still remember when Etan Patz disappeared," says Donohoe, referring to the 6-year-old Manhattan boy who vanished in 1979 and was never seen again. At the early stages of writing Ghosts of the Missing, Donohoe became fascinated by how such a case might unfold in a more intimate setting, a town "where everybody knows everybody," as opposed to an urban setting.

Thus was born the fictional upstate New York town of Culleton. It was named from the Irish word for sleep "because it wasn't a place to live but a place to shut their eyes for the hours between shifts," Donohoe writes.

She says research about the Hudson Valley revealed that a "missionary priest really used to go up and down the Hudson River," saying Mass for newly arrived immigrants.

Eventually, a parish is established in Culleton, despite anti-immigrant animosity. Generations grow up participating in the town's unique traditions, including an autumnal celebration and festival called Quicken Day, which is named after a tree.

It is on this day, in 1995, that a local girl named Rowan Kinnane vanishes, forcing a broad cast of characters to reckon with terrible questions: What happened? Could a local have committed such a terrible crime? And what can be done to ease the suffering of those holding out hope that this child will be found?

Another name for a quicken tree is a rowan, which suggests the deep literary turf Donohoe is mining for rich metaphors about roots and growth, about life, death and rebirth.

Along the way, Ghosts of the Missing becomes a local history and ghost story, a family tragedy and religious journey — part Alice Sebold, part Alice McDermott.

"I became fascinated by the ways that what happened generations ago still somehow affected these characters," Donohoe says. "A decision your great-grandmother made still affects you."

This is certainly the case for Adair McCrohan, an aspiring artist living in 21st-century Brooklyn, who was childhood friends with the vanished Rowan. Adair's mother brought her into contact with a former priest who now goes by the name Janus — an allusion to the Roman god of beginnings and transitions who was said to have two faces.

There was a time, however, when the priest's name was Peter, "raised on Long Island, post-World War II ... son of a veteran and a housewife. Of their six children, he was the third." Peter becomes a hard-working and dedicated cleric, who by the mid-1980s is reunited, under sad circumstances, with a fellow seminarian who'd gone off to serve as a chaplain in Vietnam.

Peter ultimately experiences a crisis of faith, which only makes him a more compelling and important character, to Donohoe.

"So many times, when you hear about a character who is a Catholic priest, it's just a code word for sex offender," she said. "I wanted to pursue this character much more deeply."

By the time he becomes Janus — he of the two faces, perhaps suggesting deceit, but also capable of finding guidance in the past, as well as the future — Peter has left the priesthood. But it does not stop him from ministering to a flock in desperate need.

"He has found a way to still honor his vows," notes Donohoe.

The same can be said for a nun named Sister Regina, the principal of St. Maren's grammar school in Culleton. Growing up, Adair McCrohan has a serious medical condition, so before she enrolls in public school, the principal wants to "consult with doctors and the parents of the children who would be [her] classmates. Homeschooling was suggested."

But when he goes to St. Maren's, Sister Regina flatly "declared that Adair McCrohan would be admitted," and that the parish pastor would register no objection, "less on moral grounds and more because he did not have the energy for a fight with the nun."

Donohoe herself believes the faith in which she was raised continues to influence her in numerous complex ways as a person and an artist.

"There's a lot of wishing I could believe the way I once did when I was a kid," admits Donohoe. Still, "a lot of being Catholic is about the imagination. You pray to a saint you can't see, to another world you can't see."

In that sense, it became natural for Donohoe to turn Ghosts of the Missing into, well, a literal ghost story. This also compels readers to see the characters who occupy firm space on this earth as ghostly in their own ways, drifting in search of answers, guidance and solidity.

And poor missing Rowan Kinnane becomes a poignant symbol of so many of our struggles: the frustration of fruitless quests, the inevitability of suffering, the hopes for a touch of grace or salvation. 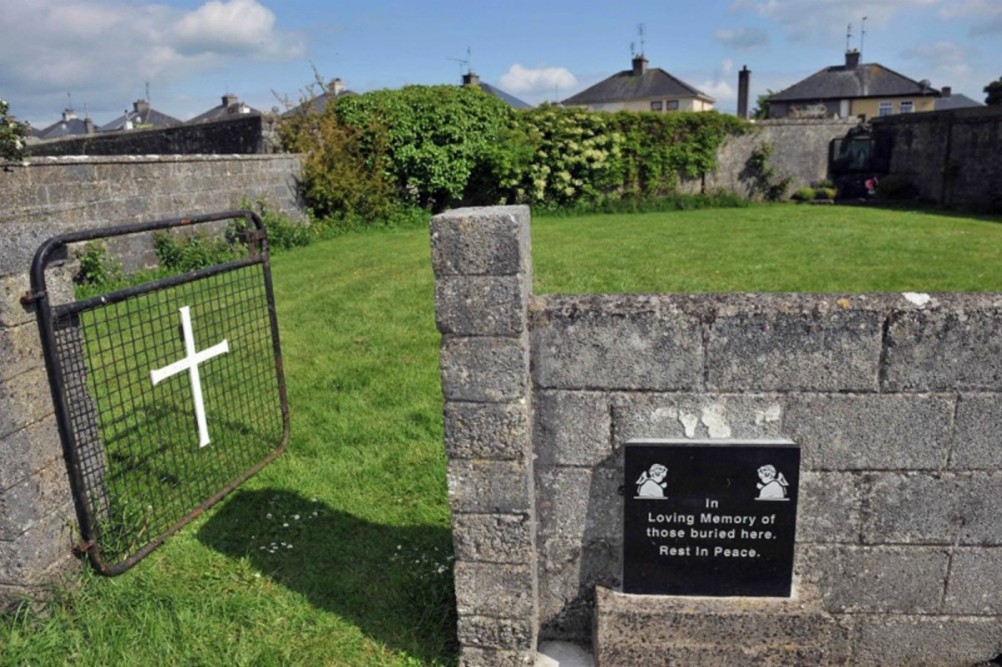 The site of a former state-funded, Catholic-run mother and baby home in Tuam, Ireland, is seen in an undated photo. (CNS/The Irish Catholic)

Donohoe has her own personal ghosts of history with which to contend. Her paternal grandparents came to the United States from Ireland in the 1920s from a town called Tuam in the western county of Galway. In recent years, historians and journalists have uncovered evidence at Tuam orphanages of horrific abuse, wrongful adoptions and mass graves for so called "home babies," or infants born to unwed mothers.

Donohoe heard about none of this growing up. Which does not stop her from understanding that this was something that must have touched her family in a profound way.

"Tuam is a small town. The children who were being raised in the home went to the local school. I must have family members who knew them, or at least knew about the home."

In this sense, Donohoe's family is not unlike many of the characters in her first two books. In the face of great adversity, they survive and occasionally even manage to thrive. Or, as Wallace Stevens put it in the poem that gave her first book its title, they are "ashes of fiery weather … beautiful and abandoned refugees."

[Tom Deignan, an author and journalist, has written about books for The New York Times, The Washington Post and The Philadelphia Inquirer.]