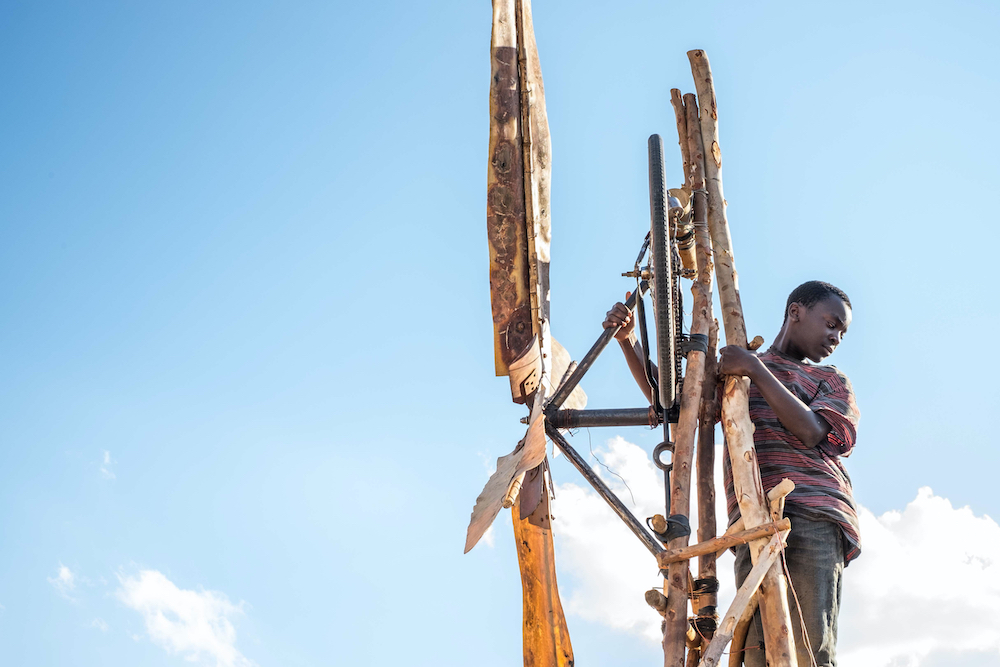 Maxwell Simba stars as William Kamkwamba in "The Boy Who Harnessed the Wind," based on the memoir of the same name. (Netflix/Ilze Kitshoff)

Thirteen-year-old William Kamkwamba (Maxwell Simba) is blessed with a special talent. He has an intuitive sense of how electronic gadgetry works, fixing small broken electronics from sheer innate genius. He also possesses the gift of invention that sees new connections and possibilities in an impasse. If he were born in the United States, Germany or Japan, he would be a child prodigy poised to obtain a future science and technology scholarship, which would then serve as an open portal to a personal career as an engineer or a scientist.

But the barefaced reality is that while talent is universal, opportunity is not. William is from the Southeast African country of Malawi, in a remote and impoverished village known as Wimbe, to be exact. His singular option is to tread the pathway that would allow him to use his gift to save his village from famine. And he is aware that he faces formidable obstacles before he can see it come to fruition.

"The Boy Who Harnessed the Wind" (2019), a film adaptation of Kamkwamba's autobiographical book of the same title, dedicates the first half of its narrative piecing together the harsh realities of village life in Malawi. Here, there is neither magic nor miracle that leads to moments of redemption; the villagers bear a heavy yoke that often borders the limits of what human strength can bear.

William's family is hard pressed on every side; natural, structural and personal issues bleed into each other as if conspiring to kill whatever hope remains in the human spirit. A drought has rendered the land barren and unsuitable for planting crops, causing severe famine and widespread panic. The de facto political powers abuse state resources and use the military to repress popular sentiment; in one local campaign rally, armed men accost and wound Chief Wembe (Joseph Marcell), silencing the community's prophetic mouthpiece.

William's father Trywell (Chiwetel Ejiofor) is a subsistence farmer who stands by his principles in the face of big business that threatens to buy out land, demolish trees and establish a tobacco plantation. He could barely provide sustenance for his wife and their three children, let alone pay for the balance for William's school fees. Meantime, his wife Agnes (Aïssa Maïga) is at her wit's end as she faces looters who raid their meager food supply while her family is reduced to eating one meal a day.

Although the film takes the contextual assignment seriously and casts a critical eye on sociopolitical issues and their causes, a good-natured and life affirming counter-narrative is patiently seething and bubbling throughout the film's dramatic arc. William, who would often scavenge for scrap mechanical parts from the junkyard, discovers the light-generating dynamo from a bicycle. This kindles in him the idea of building a wind-driven turbine that would pump water onto the arid farmlands. Slyly arranging to do research in the school library despite his expulsion for being short on tuition money, he comes across the science school book, Using Energy, an important step toward ferrying the promise of his vision into the realm of the possible. 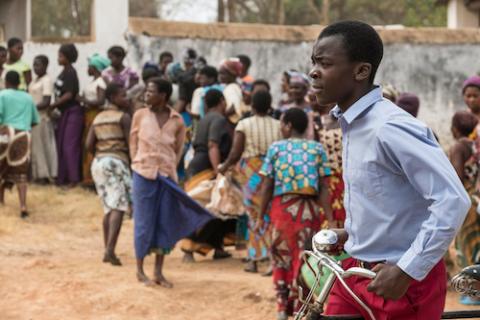 Maxwell Simba, right, stars in "The Boy Who Harnessed the Wind." (Netflix/Ilze Kitshoff)

"The Boy Who Harnessed the Wind" is an assured first directorial offering from Nigerian-British actor Ejiofor ("Children of Men," "12 Years a Slave"). Ejiofor, who is also credited for the film's screenplay, does not solely rely on the more literary conventions such as expository dialogue and plot devices; he clearly understands the power of image to tell the story. The cinematographic attention to Wimbe's agrarian landscape underscores the crucial link between the characters and their ancestral lands that had sustained them for generations.

Ejiofor adds a rich symbolic layer to this with the surreal appearance of a group of tribal masked figures — the mysterious band of ritual dancers known as Gule Wamkulu — at key junctures of the narrative. Ritual masks, in a number of African traditions, signify the spirits of the ancestors. Their appearance here eloquently symbolizes the community's cultural and moral rootedness to their land. Doing a bit of research, I also came to know that the Gule Wamkulu believe in a Supreme Being who expresses care and benevolence through rainfall. For the masked dancers to appear during a drought suggests the promise of rain in some shape or form, but at this point, only William has the vision to see the forming "rainclouds."

We learn that William's family is Christian as we see Trywell in an early scene leading the family in saying grace before a meal. At a later meal scene, however, in one of the film's most poignant and theologically charged moments, his wife utters one word when he begins to pray for rain — "Stop." This is not so much a denial of faith as an eloquent protest against a narrow understanding of prayer as a passive begging for heavenly solutions, rather than a dynamic approach to prayer as saving action that can be "harnessed" through divine-human partnership. The film's closing frame alludes to the latter in the form of an African proverb: "God is as the wind which touches everything."

Although the film's ending is no big surprise, I'll refrain from letting out spoilers. It's enough to say that the cinematic story feels authentic to the very end, and this has to do as well with the seamless portrayals of the ensemble cast.

I've been asked a number of times about my recommendation for "quarantine viewing" in the eye a worldwide pandemic that had irreversibly shaken the stable ground — or so we thought — upon which we stood. My criteria would include these points: a film that recognizes our vital interrelationship with God, with each other and with nature; a film that does not sugar-coat the fiascos of human existence; a film that celebrates the resilience and ingenuity of vulnerable people in a cultural context other than our own; and a film that is insightful as it is engaging.

"The Boy Who Harnessed the Wind" invites us to harness the power of the cinematic story, and be rewarded, not just with entertainment, but also with hope-inspiring water for such a "drought" as this. For me, it ticks all the boxes. 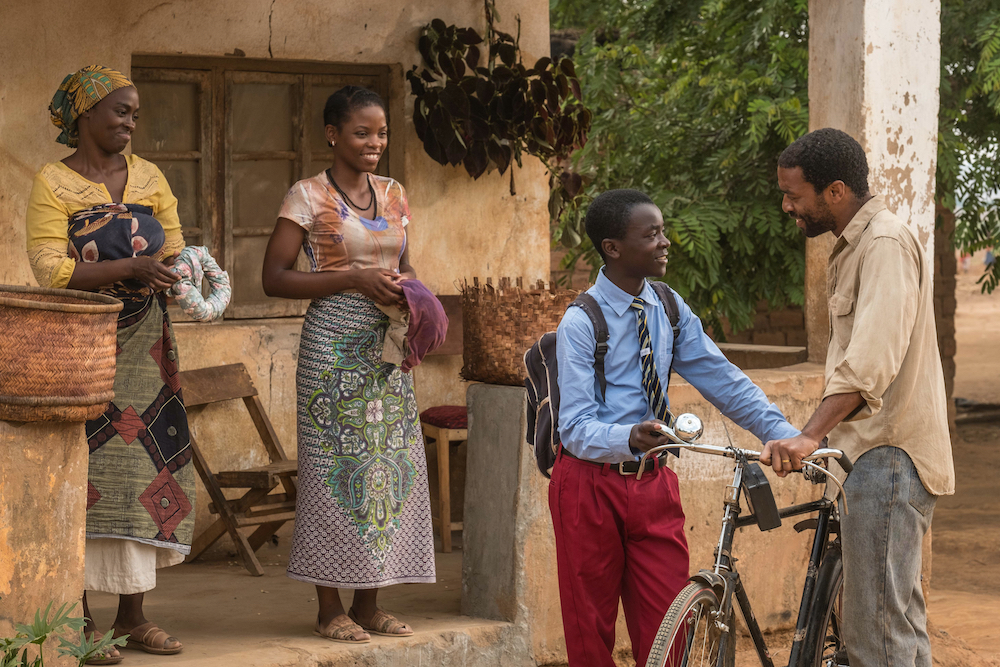 [Precious Blood Br. Antonio D. Sison is associate professor of systematic theology at Catholic Theological Union, Chicago, and author of the book The Sacred Foodways of Film (Pickwick, 2016). "The Boy Who Harnessed the Wind" is on Netflix streaming from BBC Films, Participant Media, BFI and Potboiler Production.]