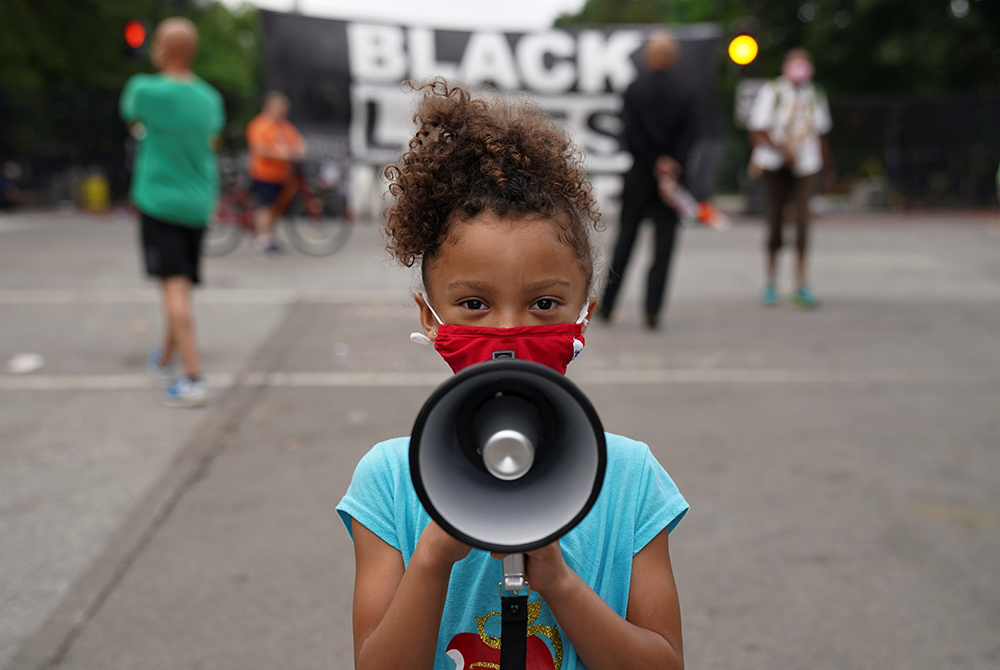 Mischa, 6, from Maryland, holds a bullhorn in front of a "Black Lives Matter" protest sign near the White House June 10, 2020, in Washington. (CNS/Kevin Lamarque, Reuters)

Editor's note: This is excerpted from Birth of a Movement: Black Lives Matter and the Catholic Church (Orbis Books, 2021). Used with permission. 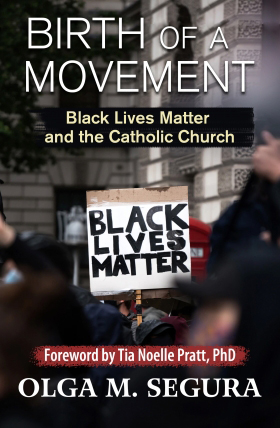 In "A Christian Call for Reparations," the Rev. Kelly Brown Douglas described the need for faith leaders to center the Black experiences as crucial for their spirituality and ultimate salvation. By rejecting white supremacy and actively working to repair the harm Christian institutions have done to Black Americans, faith leaders can work to become moral leaders. For the Catholic Church to place itself within this struggle, it must make amends for the ways that it, too, has harmed Black Americans since the birth of the United States.

Historian Shannen Dee Williams has challenged many of us regarding the church's true role in chattel slavery. Along with slavery came racial capitalism, an economic system that relied on the exploitation, torture, rape, and often murder of Black and indigenous people throughout American history. As the first churches were being erected across the country, as Catholic schools were being created, including some of the oldest Jesuit colleges, this country was simultaneously viewing Black women and men as objects that would enhance profit. Our own church, which claims to internalize the gospel, enslaved Africans; our own church used Black women, men, and children to promote its own well-being and success over Black livelihood.

Throughout the American church's history and well into the twentieth century, religious orders were also actively working to keep Black women and men out. Williams wrote that many Black women and men chose, instead, to start their own religious orders. Universities run by religious orders, like Georgetown University, were also complicit in racial capitalism. The Jesuits who ran Georgetown University in 1838, just forty-nine years after the first Catholic bishop in America founded it, sold 272 enslaved persons to avoid bankruptcy. 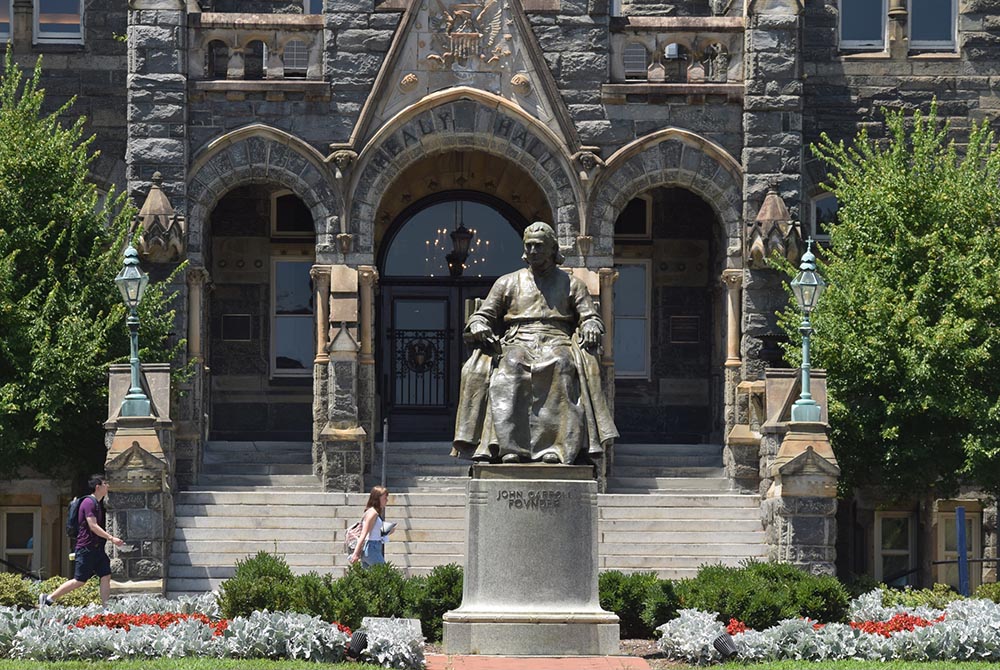 "Colonial academies were born in the slave economy, and that same economy founded the expansion of the educational infrastructure in the early years of the United States," wrote Craig Steven Wilder in "Sons from the Southward and Some from the West Indies," from 2019's Slavery and the University: Histories and Legacies.

Onita Estes-Hicks understands this history well. A cradle Catholic, born in New Orleans in 1936, Onita has loved the church her whole life. Her family had ties to the Knights of Peter Claver, an organization for African American lay Catholics founded in 1909 by Father Conrad Friedrich Rebesher, and growing up, they often hosted priests to dinner. She was educated in Catholic schools and involved in the choir. In 2004, her family learned that her paternal great-great-grandparents, Nace and Biby Butler, and their children, were part of the 272 enslaved persons sold by Georgetown's Jesuits in 1838.

"This breached our awareness of ourselves, who we were as Catholics," Onita told me. For years, her faith struggled to reconcile their faith within a church that sold their ancestors. It took fourteen years before her faith felt whole again; and this was thanks to Georgetown's efforts to reckon with its slaveholding past. "I came out with a deeper sense of what it meant to be a Catholic and also with a deeper sense of how Catholicism had failed us."

Georgetown is the first American Catholic institution to grapple with its slaveholding past and offer financial resources as part of that atonement. As university president John J. DeGioia stated, the school is truly committed to reckoning with its past. By repairing their racist past, Georgetown is actively working to align the Catholic tradition with the struggle for liberation. In order to make amends, our church must do the same. 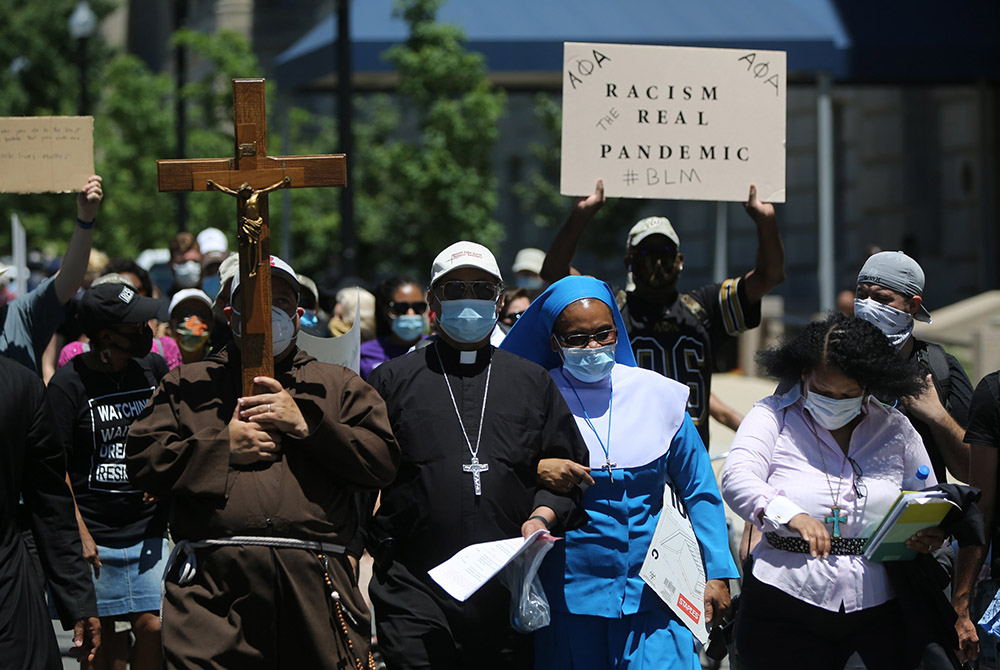 Washington Auxiliary Bishop Roy Campbell and a woman religious walk with others toward the National Museum of African American History and Culture in Washington during a peaceful protest June 8, 2020, following the police killing of George Floyd, an unarmed Black man in Minneapolis whose neck was pinned to the ground by a white police officer for more than eight minutes. (CNS/Bob Roller)

Black Catholics want to feel heard; they want a church that reflects and uplifts them toward liberation; a church that cares about their spiritual and physical lives — a church that atones.

This can begin by publicly embracing BLM. Racial capitalism dictates the ways we define what it means to be a corporate body, an institution, or a professional. The American church has so fully internalized these white supremacist ideals, rationalizing a spiritual racism of its own, that it is unable to imagine our church as one centered in the struggle for liberation under the leadership of Black women.

The inability to acknowledge this work also continues to perpetuate systemic oppression and accentuates the hypocrisy of the church on the issue of racism. The various arguments that there is no need to expect more from the bishops comes from a privileged perspective, one shared by mostly white Catholics, and proves even more why bishops must demonstrate that they care about Black liberation. Catholics of color deserve to see leaders who are prioritizing their wants, needs, and concerns.

Black Catholics want to feel heard; they want a church that reflects and uplifts them toward liberation; a church that cares about their spiritual and physical lives — a church that atones. 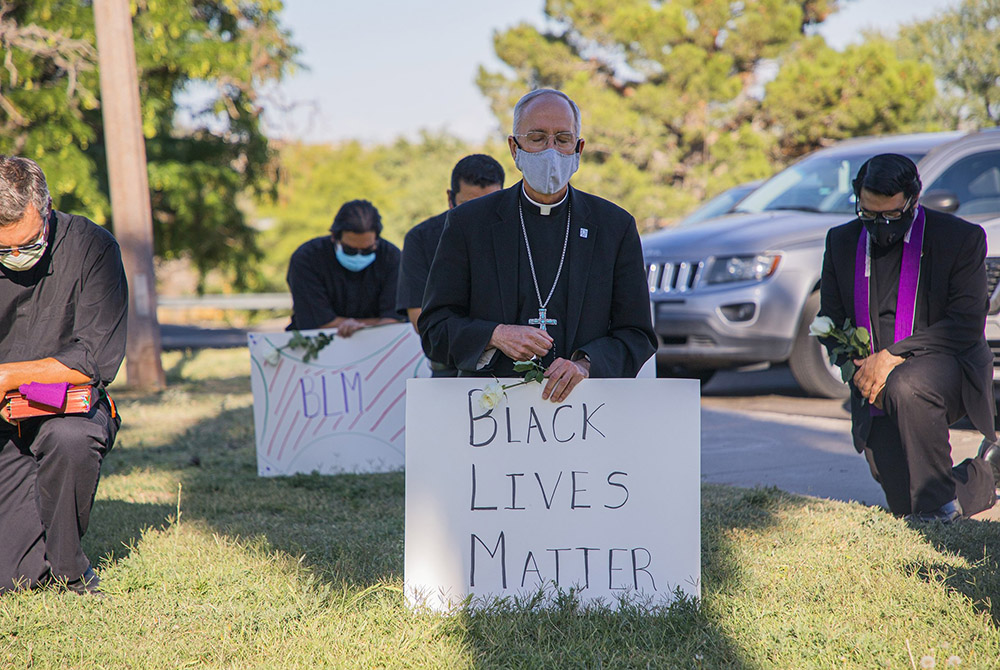 Church reparation must also be financial. The finances of the USCCB are distributed into the following five funds. First, there is one for general operations, which is funded by "diocesan assessments, investment income, and other sources." This fund helps "finance the current operations of USCCB." Second, there is the building fund, which covers the conference's property and assets. This includes "land, buildings, furniture," the "St. John's staff houses," and "improvements to the Villa Stritch staff facilities in Rome." The fund also sets money aside for any "maintenance and improvements these properties might require." Third is the general reserve fund, which was created in 1993 to finance "sudden, unusual, ad hoc and/or short-term projects." The fourth fund, focused on catechism, was created in 1995 to provide resources "related to the publishing, sales promotion and distribution of the United States release of the Catechism of the Catholic Church. The fifth and final one, the quasi endowment Reparations and the Catholic Church 95 fund, was formed in 1997 "to supplement the diocesan assessments by applying an annual spending rate to use for current operations."

Every year, the bishops meet and vote on their annual budget. The total revenue for 2018 was $203,649,630, with a deficit of $29,475,656. This budget was spread among the funds listed above, including specific subcategories such as $58,969,590 for policy activities. This category includes migration and refugee services, communications, Catholic education, and prolife issues. 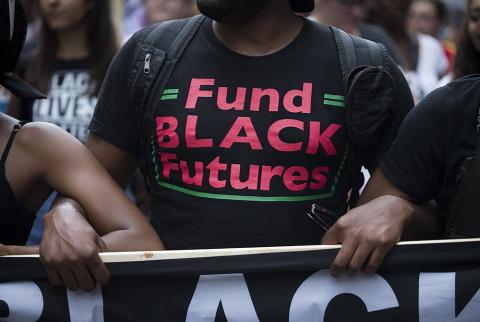 Black Lives Matter demonstrators are seen near Lafayette Square in Washington Aug. 12, 2018, during the start of a white nationalists' rally "Unite the Right 2." (CNS/Tyler Orsburn)

If the church is to embrace anticapitalism, which it must embrace in order to work toward a truly liberating Catholicism, then our bishops could begin by allocating a fund from their various collections toward a reparations fund for some of the most impoverished Black communities across the country. Not only would this fund allow the bishops to support marginalized communities, it would actively move the bishops away from a reliance on funds to support their own, sometimes lavish, homes or needs. The faithful cannot hear our church fathers when they sit so far removed from our daily, impoverished lives.

The Jesuits taught me that to be a faith leader, one must take vows to guarantee that the focus is on helping the most marginalized and on living out one's vocation. All Jesuits take vows of poverty. This vow helps the brothers and priests develop deeper empathy for the communities they serve. I know Jesuits who are serving Black communities and promoting the work of transgender Catholics. These are men who helped plant the anticapitalist framework I would develop years later. They have helped shape my faith as one centered not on money but on encountering and rejecting the temptations of capitalism. Our bishops should consider taking vows of poverty.

The current racial crisis in America, one that creates ripple effects in marginalized communities around the world, is a moral crisis that demands radical, transformative reparations.