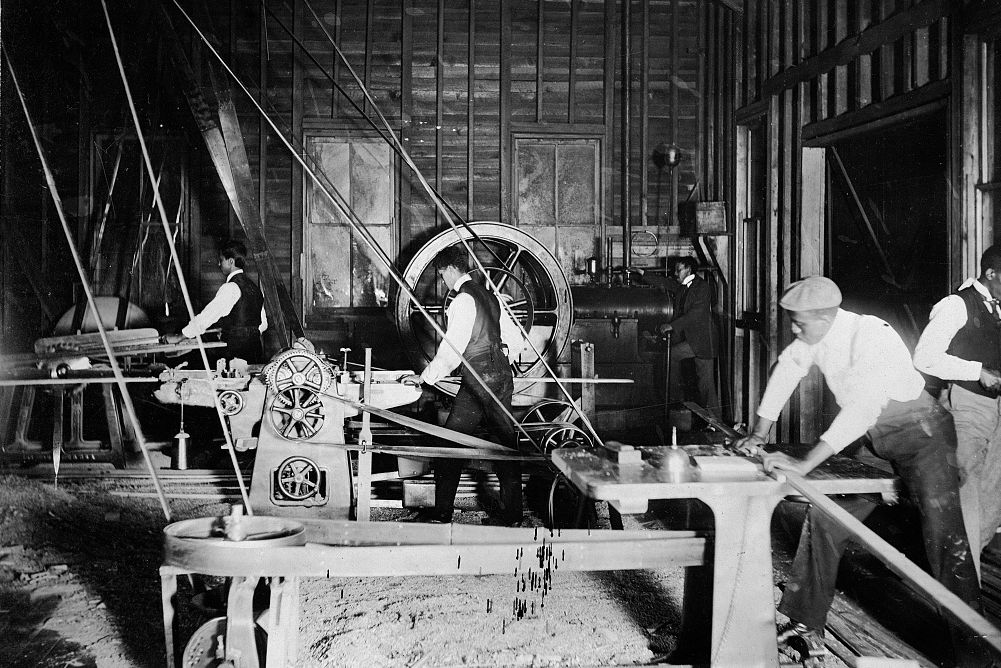 Detail of photograph of wood work shop of Claflin University, Orangeburg, South Carolina, reportedly collected for display at the Paris Exposition of 1900 (Library of Congress)

Renewed calls for reparations by the church and the people of God ought to be a sting of conscience that goes to the central act of worship of church: the Eucharist.

Catholics share loving memory of the life, passion, death and resurrection of Jesus Christ with and in whom we, too, are called to transform the world. This Lenten season, eucharistic memory calls people of faith to a way of being that transforms historical wounds, including the open wound of the legacy of slavery.

Unsurprisingly, a flurry of condemnations of the idea of reparations erupted on social media.

Boston Globe columnist Jeff Jacoby argues that reparations for slavery is "unworkable and unjust." Contending that slavery was abolished in the northeast within 15 years of the American Revolution and that 75 percent of whites never owned slaves during the height of Southern slavocracy, Jacoby asserts that the time for reparations is when slaves were alive. Echoing the editors at the National Review, he asks to whom are reparations owed. And, if there were reparations, he decries the "racial group entitlement" that would be established. Ultimately, he concludes that the kind of experts needed to untangle these complex questions don't exist.

First, against the erroneous assumption of Northern innocence, as four reporters from the Hartford Courant show in Complicity, the North in fact "promoted, prolonged, and profited from slavery." Second, contrary to the erroneous assumption that slavery "is past, so get over it," economic historians illustrate how it is impossible to understand America's "spectacular economic development without situating slavery front and center."

Viewed under historical scrutiny, the National Review's and Jacoby's other arguments wilt. Nikole Hannah Jones, reporter for The New York Times magazine covering race from 1619 to present and co-founder of the Ida B. Wells Society, delivered stinging rebuttals on Twitter, starting with the fact that Jacoby "pretends the federal government = WHITE PEOPLE, that the federal government did not deny reparations to the living victims of slavery, [and] that racial apartheid against slave descendants did not end until 1968."

Recall that at the end of the Civil War, General Sherman issued Field Order 15 in late January 1865, a plan that later became known by the signature phrase "40 acres and a mule." After President Abraham Lincoln's assassination, President Andrew Johnson rescinded Field Order 15 and prevented former slaves from owning, much less profiting from, tilling the land.

Jones then asks Jacoby: "… when were black people have supposed to have gotten these reparations? When federal troops were withdrawing  from the South after Reconstructions, leaving black people completely disenfranchised and subordinated by their former 'masters'?" This graphic illustrates the historical weight of the questions raised by Jones that Jacoby never answers: "40 acres and a mule" is worth at least $6.4 trillion dollars today.

The fact of the matter is that the historical legacy of slavery is still with us, written into the DNA of racial capitalism. As a 2016 report by the Economic Policy Institute demonstrates, it will take "black families 228 years to earn the same amount of wealth as white families have today."

And, contra Jacoby, there are many experts who have answered his questions with a wealth of research accumulated over the last 50 years. We can start with the work of William Darity, Darrick Hamilton, Mark Paul, Alan Aja, Anne Price, Antonio Moore and Caterina Chiopris, who demonstrate that improving financial literacy, elevating educational achievement, increasing savings and encouraging entrepreneurship would help African Americans — but ultimately fail to address a wealth gap that African Americans did not create.

In a recent interview on C-Span, Duke University economist Darity answers all of Jacoby's questions. Reparations would redress cumulative anti-black racism that is foundational to the U.S. economy. Regarding beneficiaries, Darity explains, "If anyone has at least one ancestor who was enslaved in the U.S. and self-identified as black, African American, negro or colored for at least 10 years before the enactment of a reparations program, they are eligible for reparations. Everything else is irrelevant."

Scholar Katherine Franke builds upon Darity's work, contending that we need a collective moral reckoning that would include "innovative models such as reinvestment in black communities through community land trusts, limited equity housing cooperatives, mutual housing associations, and deed-restricted housing — sometimes referred to as 'third sector housing' — all used to empower black communities by transferring resources and property back into those communities." She continues to illuminate how this would deter white gentrification and remove housing from the speculative, for-profit real estate market and put property back into the hands of black communities in a modern form of Sherman's land-grants.

Finally, against the contention that reparations are divisive, Catholics ought to know that remembering Jesus indeed is dangerous. Catholics ought to stop all talk of eucharistic memory and solidarity until we remember that when the priest offers the prayer to thank the "work of human hands," it includes Christ's memory of enslaved Africans who built the American system of free enterprise. We can honor their memory in how we prepare ourselves to enact reparations for their living descendants now.