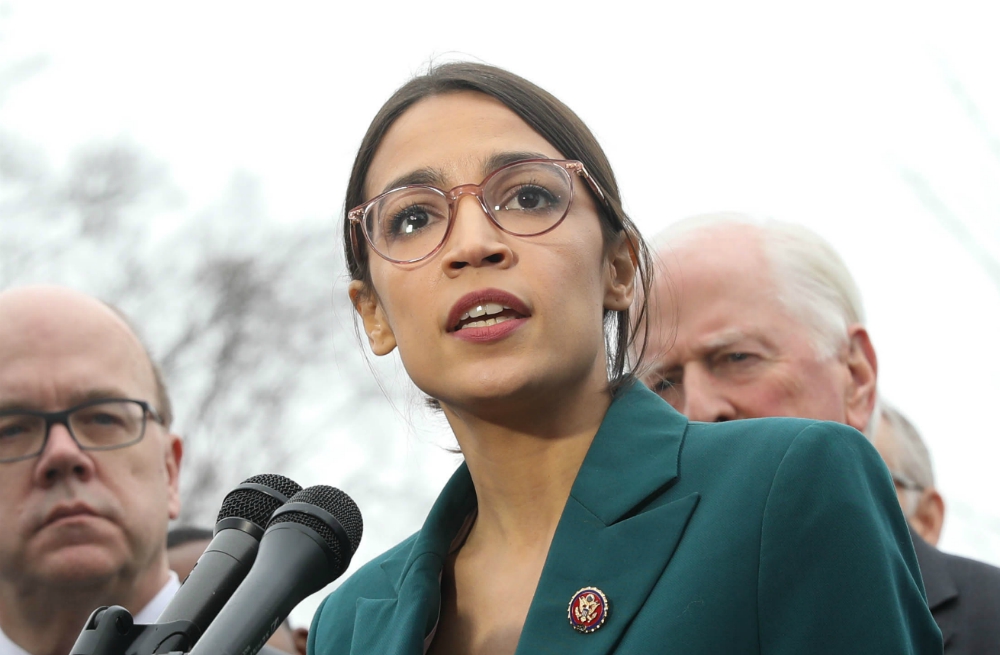 As we begin Lent, one of the signs of our time is unrelenting attacks on Rep. Alexandria Ocasio-Cortez (D-New York), who upset the former Queens Democratic party boss Joe Crowley after he had served 10 terms in Congress.

People of faith who seek to deepen their love of neighbor this Lent, I believe, ought to embrace the vision and practice Ocasio-Cortez represents.

How does a 29-year-old Latina inspire such scorn? Reviewing the long list of smears and insults, it seems like heavy doses of ageism, sexism and racism certainly make up the poisonous mix.

As Newsweek reports, Ocasio-Cortez, also known as AOC, has gained the moniker the "queen of savage comebacks." Full of joy and passion for her constituents and American democracy, AOC deflects critics with an implacable sense of humor and irony.

Stephen Colbert interviewed AOC on his late night show just days after her June 2018 primary victory. Colbert began by admitting that he didn't know her name before she won. Then he asked her how she overcame a 36-point deficit in the polls and win by 15 points, a staggering 51-point shift.

Polling is often wrong, she explains, because it tries to predict who will turn out to vote; she won because her campaign "changed who turns out." She was able to attract youth and other voters who typically do not vote in a midterm election.

At the recent Conservative Political Action Conference, former White House official Sebastian Gorka warned that AOC and the Democrats "want to rebuild your home. They want to take away your hamburgers. That is what Stalin dreamt about but never achieved." GOP chairwoman Ronna McDaniel referred to people "eating dog food to survive. That is the path that Democrats are taking us down."

So it sounds like what really irks powerful politicians, especially the GOP and some conservative Democrats, is Ocasio-Cortez's passionate advocacy for the vision and policies of the Democratic Socialists of America and the new constituency that supports it.

There's a staggering irony to the GOP redbaiting when a Republican president met with Russian President Vladimir Putin a second time without any American translator or note-taker.

Although the ridiculous hypocrisy of GOP redbaiting is laughable, the rhetoric reveals a deeper irony of our time. The GOP rhetoric claims that AOC and the Democrats are taking away "our" beef, homes and way of life. "Our" goods and way of life trumps all other social and moral concerns — pun intended.

Cort was a Catholic Worker with Dorothy Day during the Great Depression, helped found the Association of Catholic Trade Unionists in 1937 and worked with Michael Harrington to initiate Democratic Socialists of America. Cort has been described as "one of the great figures of twentieth century American Catholicism" by the historian of American Catholicism James Fisher.

In the epigraph to his Christian Socialism (1988), Cort quotes St. Gregory's enduring admonishment that the goods of the Earth are "common to all and brings forth nurture for all alike. Idly then do men hold themselves innocent when they monopolize for themselves the common gift of God. In not giving what they have received they work their neighbors' death; every day they destroy all the starving poor whose means of relief they store at home."

Three patristic Cappadocian bishops, Basil the Great, Gregory of Nyssa and Gregory of Nazianzus, all underscored the primary biblical obligation to share the goods of God's creation with all, especially those who are in any way destitute.

St. John Paul II repeatedly taught this point. It is not "our" option of charity. It's a spiritual and moral obligation to God and neighbor.

For example, in Sollicitudo Rei Socialis, on the social concerns of the church, John Paul II wrote that one of the greatest injustices in the contemporary world is "the poor distribution of the goods and services originally intended for all."

"Having," as possession of goods, the pope continued, does not contribute to human perfection or the common good unless it contributes to the maturing and enriching of human "being."

Pope Francis extends this primary understanding of God's gratuitous love and Catholic social teaching in "Laudato Si', on Care for Our Common Home," in how he develops an "integral ecology" where "society as a whole, and the state in particular, are obliged to defend and promote the common good."

So, when AOC tells Colbert that she is a democratic socialist because "in a modern, moral and wealthy society, no person in America should be too poor to live," and as human beings we possess rights to health care, food, education and jobs to "lead a dignified life," she is articulating a democratic socialist vision that is deeply rooted in Jewish and Christian Scripture and Catholic social teaching.

That is a vision whereby Americans may yet achieve a fully functioning democracy.

More importantly, that is a morally rich vision of how we may authentically worship God and integrate our primary obligation to love both God and neighbor. It's a vision and practice rooted in the Gospel whereby we may passionately promote "a faith that does justice" on our Lenten journey.