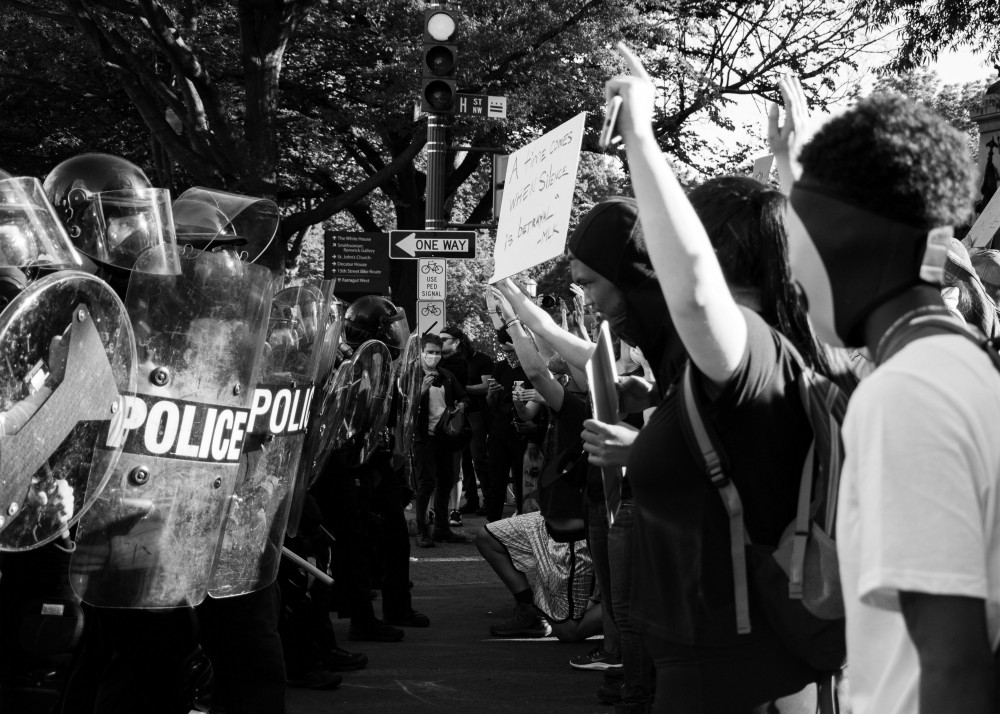 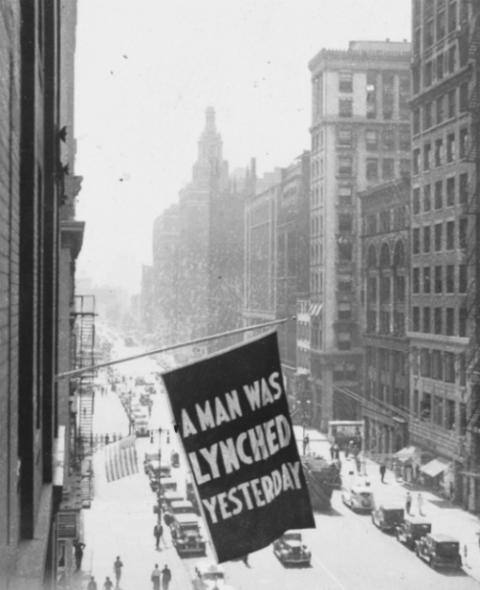 A flag reporting a lynching is flown from the window of the NAACP headquarters on Fifth Avenue in New York City. (Library of Congress/Courtesy of NAACP)

A man was lynched yesterday. The NAACP raised this sign from its Fifth Avenue office in New York City every time a lynching occurred between 1920 and 1938. The sign was raised again in Manhattan five years ago after a policeman shot Walter Scott in the back eight times. The artist Dread Scott had added a few words: "A man was lynched by police yesterday."

After 14 days and nights of protests across the United States, this sign ought to be raised everywhere, including at every Catholic parish, in memory of George Floyd.

Every American's body ought to seethe with nauseating revulsion at the tyrannical abuse of power of the police officer who casually stuck his knee into Floyd's neck — and kept it there for 8 minutes and 46 seconds — longer than it took for Floyd to stop breathing. Three other officers stood by idly and failed to protect Floyd's life.

When Floyd cried out to breathe, cried out for his mother and his life, when he was trapped in utter loneliness under that policeman's knee in piercing pain for 8 minutes and 46 seconds, Christ was crucified again.

African Americans, Latinos and First Americans are all being crucified by coronavirus on one cross, and on the other cross, the death-dealing knee not only of one police officer but of every American who is not shaking in sorrow and anger in every sinew of our being.

As a mad emperor incites violence from the White House, the nation stands on the abyss of hopelessness, if not the end of a constitutional republic, or reigniting a change of history.

M. Shawn Copeland invites people of faith to the crossroads where "heaven and earth" meet before the cross of Jesus, where our hearts and souls may yet experience graced retuning, individually and collectively.

In her chapter "A Meditation on the Blues," in Uncommon Faithfulness: The Black Catholic Experience, Copeland writes, "The blues recount the black struggle to cross the river of racism, certainly, but as that river rushes over the rapids of imperial domination all of us — irrespective of cultural, racial-ethnic identity, or religion — are caught in its current."

We stand at a crossroads filled with the danger, chaos and disorientation expressed by African American blues music even before enslaved Africans first gathered in the early 1700s in Congo Square. As Cornel West phrased it post-9/11, a "blues nation has to learn from a blues people."

We stand before the cross where people of faith — especially those who grotesquely enjoy any form of privilege and power — must face a reckoning. This reckoning demands a decision by every individual and community: either clutch the reins of U.S. imperial domination or cross over to the side of colonized peoples.

If we are going to repair the colonial wound of anti-black white supremacy, we will need to embody with every ounce of our individual and collective being a "blues hope," in Copeland's felicitous phrasing of prophetic and mystical wisdom rooted in the cross of Jesus Christ.

Embracing a blues hope means making a decision to stand with and for every black and brown person in America. It means hearing, bodily co-sensing and crying out to God with people yearning for freedom and justice.

Embodying a blues hope means giving our entire lives so tirelessly that we become one WE who transform anti-black violence into glimpses of God's kin-dom where every person and community thrives.

It means feeling the utter misery, the unforgiving humiliation and draining physical exhaustion of living in the wake of slavery, what Christina Sharpe describes as the always imminent (at any moment) and immanent (structured into our culture) death threat facing black people.

In Copeland's meditation, a blues hope means wrestling with God, lamenting loss of life and injustice, and ultimately making our entire being a "body of service for others" with and for Jesus.

For privileged white people who resist the call to crossover, at least pray and work to quiet yourself and listen. Take 8 minutes and 46 seconds to feel George Floyd's experience. Work and pray for the grace to be afflicted by our knee of injustice that the Spirit may retune our hearts, minds and souls.

Resist the urge to condemn violent struggle if you refuse to relinquish a violent culture that dehumanizes all of us. At least admit that our white investment in comfort, control and power trumps (pun intended) walking in the shoes of black people.

The image of the policeman's knee on Floyd's neck reinforces the fact expressed by NAACP President Derrick Johnson: "The expendability of Black lives is not a flaw in the system; it is the system." The NAACP initiated the #WeAreDoneDying campaign to end racial disparities in policing and every dimension of U.S. American life.

Living a blues hope means joining the "we" in #WeAreDoneDying. #WeAreDoneDying just because we went for a run (Ahmaud Arbery), were sleeping in our own home (Breonna Taylor), sought help after an accident (Renisha McBride), were driving to a new home and job (Sandra Bland), were eating skittles and wearing a hoodie (Trayvon Martin), were playing as a child in a park (Tamir Rice), or were walking with a friend (Rekia Boyd).

Floyd's death and too many others at the hands of police are not an anomaly; the rate of killings by police remains steady at least over the last two decades with nearly 1,100 killings per year. The Washington Post reports that 467 people have already been killed by the police across the nation in 2020. The police literally get away with murder.

As for white people who demand that black people offer constructive public policy solutions, African Americans have been "plotting, planning, strategizing, organizing and mobilizing" for centuries, to quote Killer Mike, including in the most recent Black Lives Matter movement.

For whom and what do you lay down your life (John 15:13)? If there is a way where there is no way, it is embodying a blues hope, following the lead of African American Catholics that we may yet glimpse the possibilities of new birth in God's beloved community.